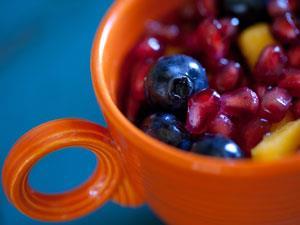 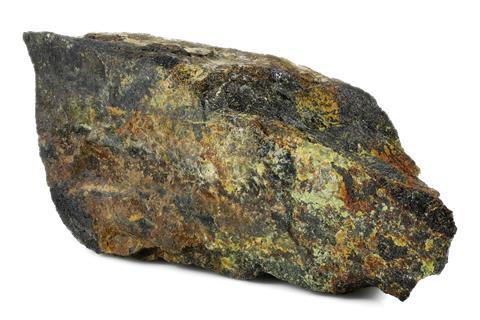 The simple compound UO2, also known as uranium (IV) oxide and the Shakespearean sounding ‘urania’ is the most common source of uranium used in the nuclear industry. The black crystalline material is the prime constituent of the ore uraninite, often still called by its old name pitchblende. Uranium dioxide is the primary raw material for nuclear fuel, though between mining the ore and the production of fuel rods it is temporarily converted into the more volatile uranium hexafluoride for enrichment.

There are large deposits of uranium oxide in Africa, the Americas and Europe, and by the nineteenth century, uranium dioxide was turning up in glazes for pottery and tiles. With various mixes and firing temperatures, it’s possible to obtain blacks and greens, but uranium dioxide was primarily used for strong colours in the oranges, reds and browns. Initially uranium dioxide was an interesting but relatively lightly used glaze colouring, but what really boosted its popularity was a side effect of the work of Marie Curie and her successors. 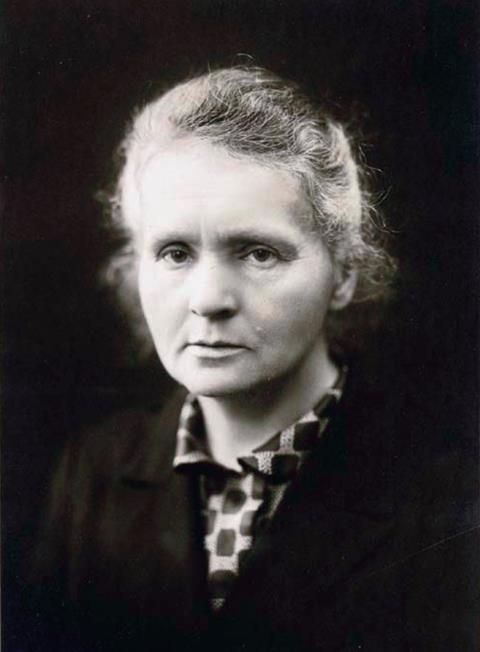 Curie had discovered radium, along with polonium, in pitchblende obtained from the mineral-rich Joachimsthal region on the German-Czech border. To obtain radium, first for experimental use and medical applications and later for a whole range of risky glow-in-the-dark products, vast quantities of ore were refined down to produce a tiny amount of the radioactive element – several tonnes of uraninite were required to produce just a gram of radium. This meant that plenty of uranium ore, primarily uranium dioxide, was available as a cheap by-product, and so from the 1920s, the use of uranium dioxide based glazes soared.

The result was the spread of products that not only looked striking, but were faintly radioactive. Some estimates put the percentage of tiles and similar products from the 20s and 30s that are radioactive at over 20 per cent. Although at least one health physicist considers uranium oxide glazed tiles to be a health risk, the general feeling is that the radiation levels are such that exposure does not constitute a significant risk unless the material is kept in long-term contact, or is allowed to leach into food or drink. This is also the case with the most famous application of uranium dioxide glaze, the bold red-orange American pottery known as Fiestaware.

The company behind Fiestaware, Homer Laughlin, was a heavy uranium dioxide user, but had to drop the glaze during the second world war when their stocks of oxide were taken by the government for the Manhattan Project. After the war, the company was able to return to uranium dioxide use, working with the depleted uranium left over after it had been enriched for use in reactors and bombs. Although the manufacturers dropped their striking uranium oxide glaze in the 1960s, there is still plenty of older Fiestaware, which has become collectable, in circulation. 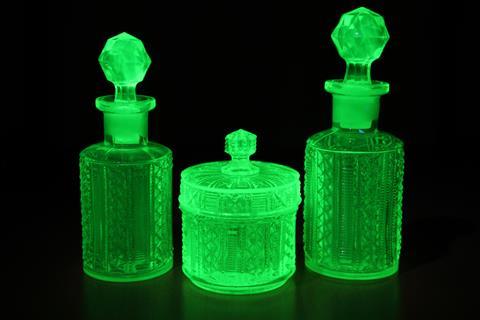 The most dramatic artistic use of the oxide is in transparent materials. Although less common than in tiles and pottery, uranium dioxide was also used to colour glass from the nineteenth century. We know it was used at least as far back as the 1830s as a pair of uranium dioxide coloured glass candlesticks were presented to Queen Victoria in 1836. Sometimes called ‘vaseline glass’ because of the similar colouration of the petroleum jelly, the glass coloured with uranium dioxide has a strong yellow-green shade that is most dramatic in ultraviolet light, where it glows a conspicuous green.

Particularly since Fukushima, nuclear reactors are controversial, despite their global warming friendly, low emission credentials. But for better or worse, uranium dioxide has continued to play a role in the energy generation industry, while never quite forgetting its glowing success in the arts.

Brian Clegg on the glowing success of uranium dioxide. Next week, is eating burned toast bad for you?

With the data available at the moment, it’s far too simple to say that the acrylamide in burnt toast gives you cancer. Back in 2002 group of researchers in Sweden measured levels  of acrylamide in food and provoked a lot of concern about the risks of dietary intake of the compound. Since then there has been a considerable growth of literature on acrylamide, with mixed conclusions.

Martha Henriques takes us through these conclusions in next week’s podcast. Until then, feel free to get in touch with any questions or comments – email chemistryworld@rsc.org, or tweet @chemistryworld.

I’m Ben Valsler, thanks for listening.