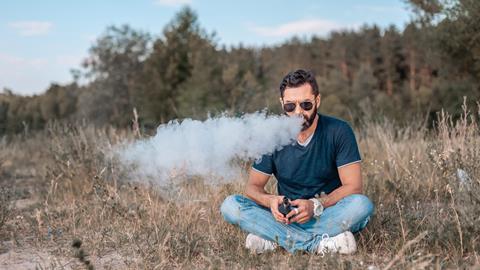 A vitamin E chemical is likely to be at least partly responsible for an outbreak of a vaping-linked lung disease that has caused 380 cases of pulmonary distress and six deaths across the US. The nutritional supplement vitamin E acetate or tocopheryl acetate is now the main focus of the US government’s investigation into this vaping-associated medical condition that has emerged in recent months. No similar phenomenon has been reported in other countries.

There is no evidence of an infectious disease among patients, so the US Centers for Disease Control and Prevention (CDC) has concluded that the most likely cause is chemical exposure. The CDC is working closely with the Food and Drug Administration (FDA), as well as state and local public health authorities, to identify the products or substances that may be behind this outbreak.

Tocopheryl acetate is being connected to a spate of serious lung problems caused by vaping in the US. The chemical is used as a nutritional supplement as it is more stable than other compounds found in vitamin E, as well as a thickening agent in cosmetics

Many of the samples tested by the FDA have been identified as vaping products containing the psychoactive component of cannabis tetrahydrocannabinol (THC). Most of the samples containing THC also contained significant amounts of vitamin E acetate.

Vitamin E acetate is not known to be harmful when ingested orally as a vitamin supplement or applied to the skin, but data on its inhalation effects are limited. Experts have said the oil-like properties of vitamin E acetate could be associated with the observed symptoms, so US public health agencies are continuing to study its health effects when inhaled.

In recent months, vaping product manufacturers in the US have started using vitamin E acetate as a thickening agent in THC oils so they can be vaped, according to Linda Bauld, a public health expert at the University of Edinburgh, who has not been involved in investigating this phenomenon. ‘E-cigarette product manufacturers, particularly in the illicit market, switched to using a vitamin E acetate form that is often used in cosmetic products as a thickening agent,’ she tells Chemistry World. ‘You have effectively got a contaminant that is causing a serious, serious health problem – it is coating the lungs.’

Peter Openshaw, an experimental medicine professor at Imperial College London, says there are plausible reasons to think vitamin E compound inhalation might explain the explosion of pulmonary illness across the US. ‘The acetate has a vapourisation point within the range reached in e-cigs,’ he explains. ‘There are studies showing that vitamin E has immunological effects that fit with the case descriptions.’

Openshaw suggests that these lung disease clusters could be related to the inhalation of oil, or oil and water mixtures, and that these cause immune activation and trigger local inflammation in the lung and, in some cases, systemic inflammation. Nevertheless, he says this doesn’t prove that it is solely down to vitamin E acetate.

The FDA is now urging the public to avoid buying vaping products ‘on the street’, and refrain from using THC oil or modifying or adding any substances to products purchased in stores. The CDC is going further, however, and telling the public to avoid using e-cigarette products altogether. The American Lung Association’s president and chief executive, Harold Wimmer, warned: ‘E-cigarettes are not safe and can cause irreversible lung damage and lung disease. No one should use e-cigarettes or any other tobacco product.’

No similar pattern of pulmonary illness has emerged in the UK. Unlike the US, all e-cigarette products in the UK are tightly regulated by the Medicines and Healthcare products Regulatory Agency (MHRA). The agency operates a ‘yellow card’ scheme that collects adverse reactions associated with nicotine-containing e-cigarettes and encourages vapers to report any health problems.

The MHRA tells Chemistry World that it received 12 spontaneous yellow card reports of adverse reactions associated with nicotine-containing e-cigarettes between late August 2018 and late August 2019. However, based on the evidence reported in these cases, the agency says it does not consider these reports to indicate severe or dangerous lung injury similar to those reported in the US.

‘Our advice remains that e-cigarettes are a fraction of the risk of smoking, and using one makes it much more likely you’ll quit successfully than relying on willpower alone,’ the MHRA states. Nevertheless, the agency says it is important to use UK-regulated e-liquids and never risk vaping homemade or illicit e-liquids.

The deaths have led the Trump administration to announce that the FDA plans to implement a federal ban on all non-tobacco flavoured e-cigarettes. ‘We intend to clear the market of flavoured e-cigarettes to reverse the deeply concerning epidemic of youth e-cigarette use that is impacting children, families, schools and communities,’ said health and human services secretary Alex Azar.

The American Public Health Association (APHA) strongly supports the proposed FDA ban, and the organisation would like it to be extended even further. ‘We have not been doing this long enough to know the true impact of vaping on people’s lungs,’ Georges Benjamin, the APHA’s executive director, tells Chemistry World. He suggests that simply substituting e-cigarettes for tobacco is irresponsible at this point.