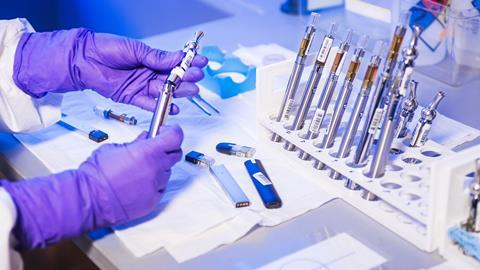 The hunt for a killer stalking vapers

The news that some e-cigarette liquids can cause deadly lung damage has taken authorities around the world by surprise. What followed was something akin to an episode of CSI. Scientists raced to find the agent that has killed 60 people in the US and sickened thousands more. It isn’t just pathologists that have been hard at work. Some clever chemical detective work has been required to track down the killer too.

As e-cigarette users started coming down with a mystery illness in the US, suspicion fell on illicit and poorly regulated e-liquids. At first the finger of blame was pointed at tetrahydrocannabinol (THC) and cannabidiol in e-liquids. But later vitamin E acetate – added as a thickener to e-liquids containing THC – was put in the spotlight. However, the injuries seen were more akin to chemical burns – vitamin E acetate couldn’t have caused these. What was going on?

The answer seems to rest with the e-cigarette devices themselves. When a user inhales, the e-liquid is vaporised at relatively high temperatures – 100–200°C. As the e-liquid passes over the heating element all the carriers, flavours and stabilisers are subject to a chemistry experiment where the end products aren’t always known. The deaths in the US appear to have been caused by one of the breakdown products of vitamin E acetate – the unstable and harmful small organic molecule ketene.

EU legislation places tighter restrictions on what can go in e-liquids than the US. A wide range of chemicals are banned including metals, vitamins and compounds linked to respiratory distress. But it seems users in the EU dodged a bullet as vitamins aren’t banned over fears that they could cause respiratory distress. The rationale was that e-liquids containing vitamins could be marketed as ‘healthy’.

Vitamin E acetate was assumed to be safe. After all it’s used in dietary supplements and cosmetics and has been given the green light by numerous food regulators. It looks as though the problem came about because the chemistry was overlooked.

What does this mean for regulators? The chemists who discovered that vitamin E acetate could produce a nasty organic akin to phosgene when vaped started investigating pyrolysis products thanks to their chemical knowledge. They knew that a similar compound to vitamin E acetate, phenyl acetate, could produce a toxic gas when heated. This means that, in future, regulators may have to spend more time considering the chemistry going on in e-cigarettes and perhaps be wary of certain classes of compound and chemical groups such as acetate. There’s a miniature chemical reactor inside every e-cigarette so it pays to spend more time thinking about the chemistry. One black swan event has come along so far, so there’s certain to be more out there. Regulators have their work cut out.