Three giants of organic chemistry, who pioneered palladium-catalysed cross coupling reactions, have shared this year's Nobel prize. Simon Hadlington catches up with them

Three giants of organic chemistry, who pioneered palladium-catalysed cross coupling reactions, have shared this year’s Nobel prize. Simon Hadlington catches up with them

When the 2010 Nobel prize for chemistry was announced on 6 October there were few, if any, raised eyebrows. For it was never a case of ’if’ Richard Heck, Ei-ichi Negishi and Akira Suzuki would win the prize, but ’when’. The three recipients were given science’s most prestigious award for creating, in the judges words, ’great art in a test tube’. In the process, they revolutionised the chemistry of forging bonds between carbon atoms - the essence of synthetic organic chemistry and the gateway to myriad compounds of value to medicine, agriculture and electronics. 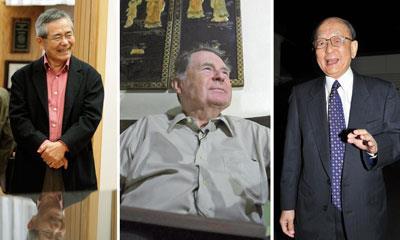 The three prize winners independently developed palladium-catalysed cross coupling reactions. Such a way of linking organic molecules had previously been impossible, especially under the mild reaction conditions and with the high degrees of selectivity and stereochemical control afforded by palladium. These coupling reactions are now carried out routinely across the world, in research laboratories and industrial processes to assemble the building blocks of complex molecules.

As Jan-Erling B?ckvall, professor of organic chemistry at the University of Stockholm in Sweden and a member of the prize committee, says, ’It is important to emphasise the great significance their discoveries have for both academic and industrial research and in the production of fine chemicals - including pharmaceuticals, agricultural chemicals, and high tech materials - that benefit society. Few reactions have contributed to enhancing the efficiency of organic synthesis as much as the palladium-catalysed cross-coupling reactions. These reactions have changed the practice of the science of synthesis and they are used for making complex molecules producing both natural products and biologically active compounds.’

The development of the technique is a beautiful example of how an enquiring and intuitive intellect can draw upon the existing body of scientific knowledge and apply it to a new problem to produce stunning results. 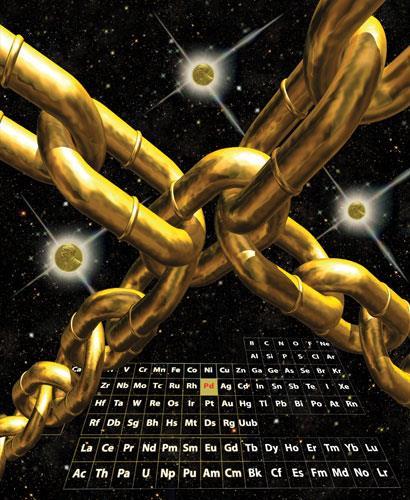 In 1968 Heck, working for the chemical company Hercules in Delaware, US, set out to investigate the utility of palladium compounds that had been previously synthesised but whose chemistry had received relatively little attention. ’There had been some reports of organopalladium compounds being made in the literature, but no one had much looked at their chemistry,’ Heck told Chemistry World  from his home in the Philippines. ’It occurred to me that they might be able to do something useful.’

Heck demonstrated that methyl- and phenylpalladium halides generated in situ could be added to olefins at room temperature. For example phenylpalladium chloride could be added to ethylene, yielding styrene once the palladium had been eliminated. This discovery led to the design of an unprecedented reaction, the arylation or alkylation of an olefin. In the early reactions the organopalladium compound was generated in stoichiometric quantities from an organomercury species and a palladium salt. A key advance was to render the reaction catalytic in palladium by using cuprous chloride to reoxidise the palladium, making it available for subsequent cycles. Four years later Heck, by then at the University of Delaware in Newark, modified the system to generate the organopalladium complex from an organohalide and palladium in its zero valent state. In this way arylation of olefins became possible by reacting an aryl halide with an alkene in the presence of a palladium catalyst, which became the standard protocol for carrying out the reaction that was to bear Heck’s name.

During the Heck reaction the Pd(0) catalyst undergoes oxidative addition of the organohalide - essentially inserting Pd into the carbon-halogen bond and forming an organopalladium species. In the process the palladium is oxidised from Pd (0) to Pd(II). The olefin then coordinates to the palladium, bringing the two carbons to be coupled - one each from the halide and the olefin - into close proximity. The carbon-bearing moiety of the halide partner migrates from the Pd centre to one of the carbons of the olefin, with the palladium shifting to the other of the olefin’s carbons - a migratory insertion that results in the new carbon-carbon bond. The palladium then grabs a hydrogen atom from a neighbouring carbon atom to reform the C=C double bond, and the newly formed molecule is released. Reductive elimination of hydrogen halide leaves the palladium in its original zero valent state, in preparation for another cycle of the reaction. 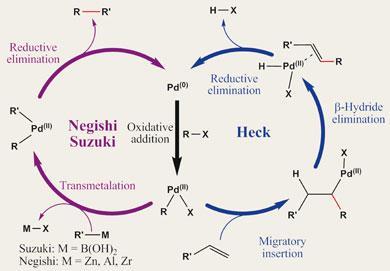 ’The results came very quickly,’ Heck recalls. ’This was a reaction that was possible with other metals, but it did not work very well. With palladium it worked much better.’ Heck understood the significance of the work immediately. ’At the time I realised that this was something that would be useful because you could not do these things easily in any other way.’ Palladium is, of course, expensive and he was concerned that the reactions might struggle to be competitive with conventional organic chemistry. ’But it turned out that you didn’t need much palladium, so that solved the problem and made it practical.’

Heck, who remained at the University of Delaware until his retirement in 1989, is now 79. Of winning the Nobel prize he says, ’It makes it all seem worthwhile.’

Fishing in the periodic table

In the early 1960s, Negishi arrived at the University of Pennsylvania in Philadelphia, US, on a scholarship and immediately discovered the frustrations of organic synthesis. ’Why is synthesis so difficult, even when you follow the cookbook recipe?’ he remembers asking. ’Some syntheses start off with a complicated compound, only to blast off most of it - why do we go about it in such a round about way? This led me to start thinking about new ways of cross coupling.’

Negishi moved to the laboratory of Herbert Brown at Purdue University in West Lafayette, US, and began investigating cross coupling using organometallics and transition metal catalysts. ’I thought we should go fishing, using the periodic table as our guide,’ he told Chemistry World.

There was already a body of literature dating back more than 30 years on the use of transition metals for a range of coupling reactions. Cobalt, nickel and iron could catalyse the C-C bond forming reactions of Grignard reagents - alkyl or aryl magnesium halides - with organohalides. However, these reactions were intolerant of certain delicate functional groups, and showed relatively low selectivity, giving synthetic organic chemists something of a headache.

Eventually, Negishi hit upon a combination of organoaluminium and nickel, which, he says, was the eureka moment. ’I realised quickly that this reaction would have wide applicability,’ he says. Having moved to Syracuse University, US, between 1976 and 1978 Negishi published several papers describing Pd- or Ni-catalysed cross coupling of various organometals. He found a number of combinations that provided high selectivity and yield. Today, those reactions involving zinc, aluminium and zirconium are called Negishi coupling.

At 75, Negishi remains active as the HC Brown distinguished professor of chemistry at Purdue, and says that the award of the Nobel prize will not prompt him to retire. ’I have accomplished maybe half my goal,’ he says. ’I would like to keep working for at least several more years.’

In 1979 Suzuki, working at Hokkaido University in Japan, made his key discovery. In the presence of a base, organoboron compounds can cross couple with vinyl and aryl halides with palladium as catalyst. The innate stability of organoboron compounds, mild reaction conditions and broad functional group tolerance mean that this reaction has become highly practical, both in academic and industrial settings. Suzuki, who is now 80, retired in 1994 but remains an emeritus professor at Hokkaido.

Suzuki and Negishi couplings begin the same way as the Heck reaction, with oxidative addition of Pd (0) to an organohalide. The second coupling partner is delivered to palladium by a transmetalation process from the relevant organometallic reagent. Reductive elimination then brings the two partners together, forging a new C-C bond and regenerating the Pd(0) catalyst.

A fourth pioneer of palladium catalysed cross coupling was John Stille, an American chemist who many believe would also have shared the prize had he not been killed in an airline crash in Iowa in 1989. Twelve years earlier at Colorado State University in Fort Collins, US, Stille discovered that palladium could catalyse cross coupling reactions of organohalides with organotin compounds. ’The three scientists who ultimately shared the prize were strongly deserving of the honour, but I cannot help but think that the committee’s decision was made easier in many ways by the untimely death of John Stille,’ says Tomislav Rovis, the current holder of the John K Stille chair in chemistry at Colorado State University. ’Sadly, we will never know what could have been.’ 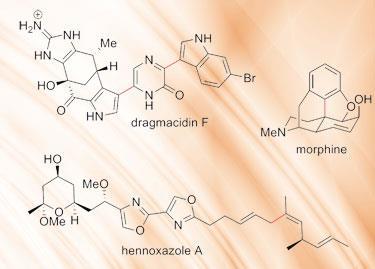 Molecules whose synthesis relied on Pd. Bonds formed by cross coupling are shown in red

To illustrate the diversity and importance of the palladium-catalysed cross coupling reactions, the Nobel prize committee cited a number of examples, from both academic and industrial scale synthesis. These include the total synthesis of the anticancer drug Taxol (paclitaxel) where the Heck reaction is used to create the complex, tricyclic eight-membered ring at the heart of the compound.1 The Heck reaction is also used to make a strategic bond in a synthesis of morphine.2

Negishi coupling was key to the laboratory synthesis of the natural product hennoxazole A, a marine antiviral compound.3 While Suzuki coupling is used to prepare the antiviral bromoindole alkaloid dragmacidin F.4 These latter two are particularly nice examples of where sensitive functional groups are present and therefore mild reaction conditions are paramount. These are merely a handful of examples of palladium-catalysed cross coupling, which has been used - and continues to be used - in the synthesis of thousands of important compounds, from the most complex natural products to tonne-scale industrial intermediates.

Chemists involved in the synthesis of organic compounds are pleased that three giants of the field have at last received the ultimate accolade in the form of the Nobel prize for chemistry. ’One of the main features of the reactions which has contributed to the prize being awarded to Heck, Negishi and Suzuki is that they are catalytic processes that allow synthetic chemists to do things which they could not previously do - to join carbon atoms together in a new way,’ says Donald Craig of Imperial College London, UK. ’They developed a new paradigm for making carbon bonds with reactions that were simply not known. It has become a very reliable, easy and convenient way of joining building blocks of larger molecules and is now absolutely part of the lexicon of the organic chemist that will be used thousands of times a day worldwide.’

More recent work has extended the utility of palladium catalysed cross coupling to create carbon-nitrogen and carbon-oxygen bonds. ’This has significantly increased the scope of the reaction,’ Craig adds.

The Nobel prize is fully deserved, says Craig. ’This reaction has made a huge difference to people’s lives. And looking back over the history of this field, these three are the guys responsible.’

Guy Lloyd-Jones of the University of Bristol, UK, agrees. ’They all made major, fundamental contributions to the development of transition metal catalysed chemistry, particularly palladium, which transformed the use of palladium catalysts from a curiosity into something with wide practical applications in synthetic chemistry.’