Ei-ichi Negishi, who shared the 2010 chemistry Nobel prize with Richard Heck and Akira Suzuki for a palladium-catalysed cross coupling technique to link carbon atoms and synthesise molecules, has died at the age 85. Known for his discovery of the Negishi coupling, an important reaction that forms carbon–carbon bonds, he had been a professor in the chemistry department at Purdue University in the US since 1979 and served in a distinguished post since 1998. His 6 June passing came only two days after the death of Swiss physical chemist Richard Ernst, who received the 1991 chemistry Nobel prize. 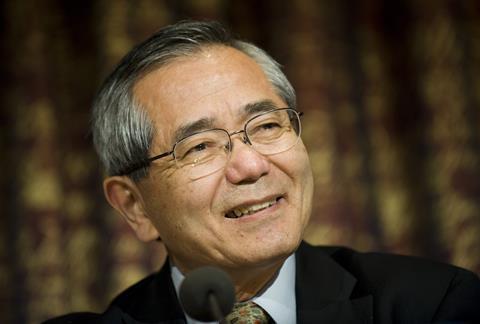 After completing a postdoctoral fellowship at Purdue University in the lab of Herbert Brown – a pioneer in the field of synthetic organic chemistry who became a chemistry Nobel winner in 1979 – Negishi joined the chemistry faculty at Syracuse University in New York in 1972. He returned to Purdue to work with Brown in 1979, which was the same year that Brown was awarded the Nobel. Two decades later, Negishi was named the Herbert C Brown distinguished professor of chemistry, and he did not retire from Purdue until 2019.

‘The world lost a great and gracious man – one who made a difference in lives as a scientist and a human being,’ said Purdue’s president, Mitch Daniels. ‘We’re saddened by Dr Negishi’s passing but grateful for his world-changing discoveries and the lives he touched and influenced as a Purdue professor.’

Of the two chemists with which Negishi shared the 2010 Chemistry Nobel Prize, the only one still alive is 90-year-old Akira Suzuki of Hokkaido University in Japan, who was also a protégé of Brown. The third winner, Richard Heck of the University of Delaware, died in 2015 at 84 years old.

Besides the Nobel Prize, Negishi also received Japan’s highest cultural award, the Order of Culture, in 2010, and the Chemical Society of Japan Award in 1996. In addition, he was awarded the RSC’s Sir Edward Frankland Prize Lectureship in 2000, as well as the American Chemical Society’s Organometallic Chemistry Award and Award for Creative Work in Synthetic Organic Chemistry in 1998 and 2010, respectively. Also in 2010, Negishi was made an honorary fellow of the RSC.

He was a very productive scientist, publishing approximately 400 original research papers, and also received more than 20 honorary doctorates from universities around the world.

While in elementary school, Negishi was attracted to maths and then electrical engineering, but switched to chemistry partly because he thought the pay would be better, he recalled in a 2010 interview with Adam Smith, editorial director of Nobel Media. ‘So, my motivation was very impure but looking back I think that I chose the right field for me,’ he told Smith.

Only hours after the call from Stockholm that alerted Negishi that he’d won the Nobel Prize, he left an international news conference to teach a sophomore-level chemistry class. ‘That really tells you all you need to know about Dr Negishi. On the very day he wins the Nobel, he’s in class with his students,’ stated Patrick Wolfe, dean of Purdue’s College of Science. ‘He was extremely approachable and passionate about not only those he served, but served with.’

He reportedly did not seek a patent for the Negishi Coupling technique because he wanted it to be available for everyone. Estimates indicate it is used in more than one-quarter of all chemical reactions in the pharmaceutical industry.

Rashmi Kumar, a postdoctoral researcher at Stanford University School of Medicine who was a graduate teaching assistant at Purdue from August 2014 to July 2020, tweeted on 11 June: ‘Extremely sad to hear the passing of Prof. Negishi. I remember him walking across the hallways of Purdue Chem and saying hello to students on his way. What struck me was that he always seemed to be so down to earth even though he won the Nobel Prize.’

Purdue unveiled a bronze sculpture of Negishi in 2014, and it sits beside one of his mentors, Brown, on permanent display inside the university’s Wetherill Laboratory of Chemistry.