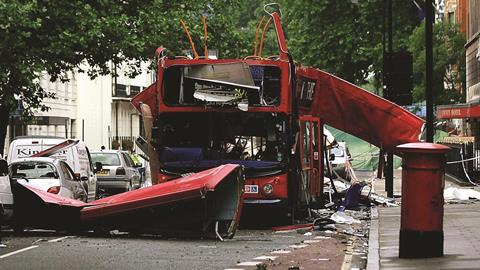 Separating the guilty and the innocent

Chromatography is one of the key weapons in the forensic scientist’s arsenal, as Clare Sansom discovers

If your interest in chemistry began in childhood, you may remember a simple experiment in which you put a spot of ink into water, added a vertical piece of blotting paper, and watched as the pigments in the ink moved up the blotting paper at varying rates. With luck, a dull-coloured ink (perhaps brown) would have separated into a beautiful rainbow of colours. This is a simple demonstration of a technique that has become one of the mainstays of analytical chemistry: chromatography. Its name is derived from the Greek words chroma (colour) and graphein (to write).

In this simple example, the blotting paper represents what is more generally known as the stationary phase and the water the mobile phase. Compounds in a mixture are separated through differences in the speed at which they move with the mobile phase through the stationary one – this difference is determined by their affinity for one phase over another. The chromatograph is linked to a detector in which the nature and often the quantities of the components will be determined. 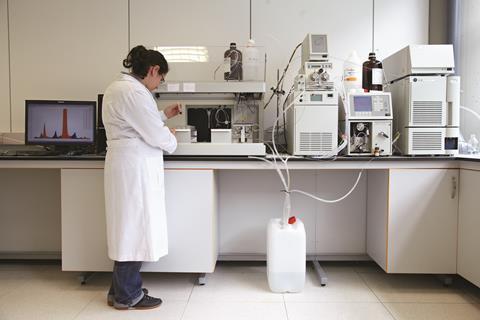 Scientists first observed the separation of pigments in ink in the 1830s. About 80 years later, a Russian, Mikhail Tsvet, carried out the first experiments that we would recognise as ‘chromatography’ to separate plant pigments including chlorophyll and the carotenes. He was nominated for the Nobel prize for his work on plants, but his analytical work was ignored for over twenty years. ‘The ground-breaking nature of Tsvet’s work went unnoticed, at least partly because he only published in Russian,’ says Leon Barron, an analytical chemist at King’s College London. The idea was picked up again after the second world war, and two British scientists, Archer Martin and Richard Synge, won the Nobel prize in chemistry in 1952 for their invention of ‘partition chromatography’ (see Martin’s column).

Chromatography, then, excels at separating and analysing complex mixtures of substances. It is therefore uniquely suited to applications in the broad area of forensic science. ‘Criminal investigations often involve analysis of complex mixtures, perhaps involving soil, water, debris, body fluids or even bone,’ explains Barron. ‘Forensic scientists have been using this technique for half a century, and it has now become the “gold standard” technique in forensic chemistry.’ Its first applications in this area were in the 1960s, when gas chromatography was used to analyse the petroleum fuels used in arson cases. An extensive review in 1976 by chemists at the UK’s Home Office Forensic Science Laboratory in Birmingham shows that by that time GC and mass spectrometry were being routinely applied to the investigation of arson, malicious damage and drug abuse. 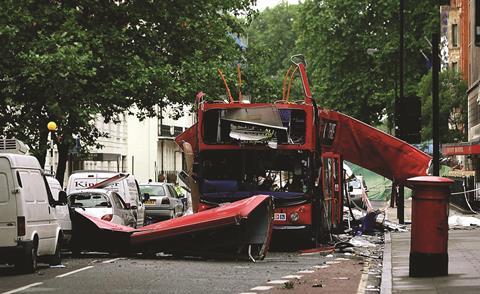 We now know of over 60 types of explosive and over 2000 poisons and illicit drugs. Establishing which of these is present in a sample taken from a crime scene typically involves separation using gas or liquid chromatography followed by mass spectrometry, and the identification of peaks that are characteristic of particular compounds. If it is a sample of blood or another body fluid it is a complex mixture even if uncontaminated. ‘Identifying a particular explosive, for example, is only the first and sometimes simplest part of the analysis,’ says Barron. ‘We also use chromatography to try to identify impurities that might suggest where or when it was made’.

Perhaps surprisingly, it is still established practice for most samples to be removed from a crime scene and transported to a laboratory for analysis. The main reasons for this are operational rather than technical, arising from the need for absolute integrity of samples that may be used in court. ‘It’s hard to ensure that samples are kept completely free of contamination if you’re doing the analysis in a mobile laboratory,’ explains Barron. ‘At the moment, serious analytical chemistry is only applied at a crime scene if it is necessary for the immediate preservation of life, for example after the release of an unknown environmental toxin or discovery of an explosive device.’ The same degree of rigour does not necessarily apply to analytical chemistry applications that are used for security screening, which are not expected nor intended to be used in court, such as in airport scanners.

It is the need for the results of a forensic analysis to stand up in court that is behind the rigorous standards that are required. The word ‘forensic’, after all, comes from the Latin forensis, meaning ‘of or before the forum’ (the ancient Roman forum being the site of their courts of law). In the case of chemical analysis, all relevant techniques are put into categories and an identification will not hold up in court unless it has been confirmed by several techniques in different categories. In practice, this means that results obtained using a combination of either LC–MS or GC–MS are often sufficient to use in evidence. 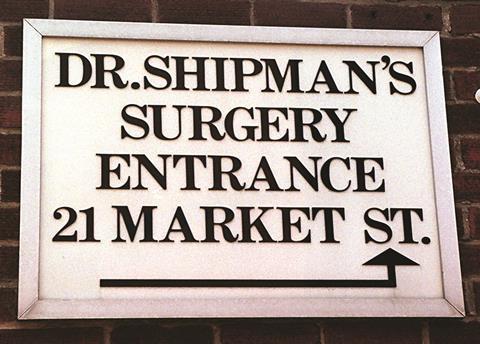 …the Shipman murders in the UK…

Chromatography has played a large part in solving some of the most famous and infamous criminal cases of the last 50 years, including, in the UK, the London bombings on 7 July 2005 and the Harold Shipman case. Shipman, a family doctor in northern England and one of the most prolific of all known serial killers, administered lethal doses of diacetylmorphine to over 200 of his patients during the 1980s and 1990s: many of his victims were identified, long after death, by determining lethal amounts of the metabolite 6-monoacetyl morphine in their exhumed bodies. Analysis of traces of the explosives used in the 7/7 attacks led to the identification of a highly unstable explosive, triacetone triperoxide (TATP). This compound has since been described as the terrorists’ ‘weapon of choice’ because it is non-nitrogenous and therefore difficult to trace, and it has been implicated in the recent suicide bombings in Paris and Brussels. The Norwegian far-right terrorist Anders Breivik, however, used a nitrate mixed with fuel oil to kill eight people in Oslo in 2011. Several different forms of chromatography are now routinely used, often in combination with mass spectrometry, to screen for and identify existing and even new types of explosives.

This type of analysis has now become so sensitive that forensic chemists are developing methods of tracking down terrorist plotters through the early detection of tiny (nano- and picogram) traces of explosives, their precursors or transformation products in waste water. This type of analysis is also being used throughout Europe to detect traces of illicit drugs in sewage systems and to monitor their use. Much of the data obtained is available on the website of the European Monitoring Centre for Drugs and Drug Addiction. ‘This analysis has shown, for example, that Londoners use more cocaine than residents of any other European city, but that other countries are hotspots for particular drugs, for example, the Netherlands for cannabis and some eastern European countries for methamphetamine,’ explains Barron. 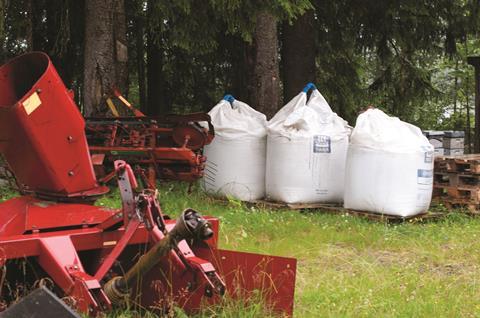 Forensic chemistry techniques are also employed in the battle against many kinds of fraud, including food fraud. It is unlikely that consumers who choose free range or organic eggs over less expensive barn ones often think about whether they are getting exactly what they pay for. Cases of passing barn eggs off as higher-welfare varieties and pocketing the price difference have been recorded, but no one knows how common this type of complex food fraud is. David Thompson, a forensic chemist at the University of Keele in the UK, is collaborating with researchers at the National Institute for Poultry Husbandry at Harper Adams University in Shropshire, UK, in developing methods for discriminating between barn, free-range and organic eggs using chromatography-based metabolic profiles. ‘The metabolites in eggs laid in different housing systems potentially differ because the chickens are fed different diets and, more subtly, due to their environment,’ says Thompson. ‘But we need to develop methods of distinguishing these patterns from others that arise from, for example, differences in the breed or age of the birds.’

Recent events around the Rio Olympics, and particularly the fate of the Russian athletes, illustrated the high stakes involved in keeping major sporting events free of performance-enhancing drugs. All the drug tests at the 2012 London Olympics were carried out by the Drug Control Centre at King’s College, London, in a satellite facility accredited by the World Anti-Doping Agency. Urine samples from thousands of athletes were screened for over 200 illicit substances using LC coupled to high resolution mass spectrometry, and for many other prohibited substances using GC coupled to tandem mass spectrometry.

Forensic scientists have to be first-class chemists, because of the level of rigour required

Clearly, this type of fraud could have been detected easily using an analytical technique that could link each urine sample to an individual athlete. And these techniques do now exist. ‘DNA profiling’ has been used to identify individuals since the 1980s. ‘This technique should not be confused with whole-genome sequencing,’ says Denise Syndercombe-Court, a forensic geneticist at King’s College London. ‘It involves comparing small sequences of DNA only, generally short repetitive sequences or differences in single base positions.’ It was first used successfully in a forensic case in 1986, to convict Colin Pitchfork of the rape and murder of two girls in Leicestershire and thence to exonerate an innocent suspect.

During the last 30 years, technical advances, and particularly the use of the polymerase chain reaction (PCR) to ‘amplify’ DNA samples, have allowed individuals to be identified using smaller and smaller samples of DNA. This can enable an identification to be made from the tiniest samples of DNA, such as might be extracted from fingerprints at a crime scene. Chemical analysis of the same fingerprints will also be used to identify substances that the suspect had handled. And it is this technique – the sequencing of the soluble DNA fragments found at very low concentration in the urine of healthy individuals – that could prevent a scam such as that at the 2014 Sochi winter Olympics from happening again. 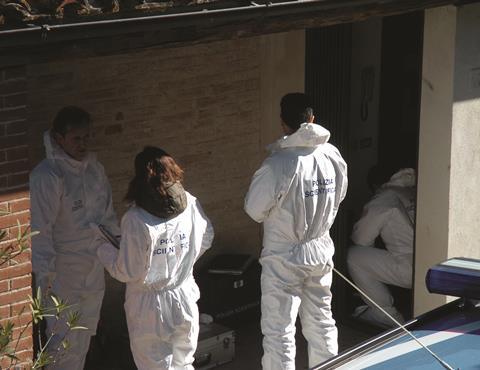 …and the murder of Meredith Kercher in 2007

However, the extreme sensitivity of modern DNA profiling techniques (and, to a lesser extent, chromatography techniques) can have disadvantages. Avoiding sample contamination is now even more essential. It is very likely that contamination of blood samples at the crime scene led to the repeated prosecutions and acquittals in the still-controversial case of the British student Meredith Kercher, murdered in Italy in 2007. Syndercombe-Court describes a similar case in the UK where DNA evidence appeared to implicate a man in a rape in Manchester despite his swearing that he had never been there. ‘This suspect was arrested for spitting at a policeman, but the rape victim’s samples were contaminated in the lab with a small amount of his DNA,’ she explains. ‘Had this not been discovered, a petty criminal would have been convicted of a much more serious offence.’

Real-life cases like these, as well as fairly realistic portrayals of the forensic sciences in books and TV series have driven a burgeoning public interest in the role of science in detection. This, in turn, will have contributed to an increasing interest in forensic science and forensic chemistry as a career. With pure chemistry courses sadly in decline, some institutions in the UK and elsewhere have converted chemistry degrees into forensic chemistry ones or added an option in the subject. Interestingly, this can present more challenges to academic than to forensic chemists. ‘Forensic scientists have to be first-class chemists, because of the level of rigour required,’ says Brian Rankin of the Chartered Society of Forensic Sciences. ‘Pure chemists, however, need to learn new skills before they can apply their science in this new context.’ And we can hope that some teenage fans of detective fiction will move the other way, and become the analytical chemists of tomorrow.

Clare Sansom is a science writer based in London, UK