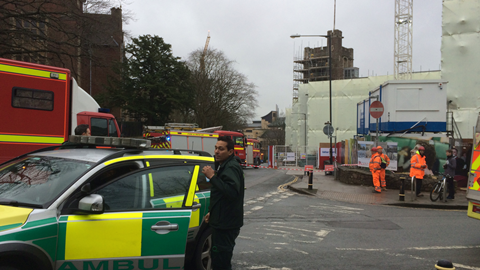 Investigation reveals missteps by student who unwittingly made explosive

Earlier this month, a graduate student at the University of Bristol inadvertently made the explosive triacetone triperoxide (TATP), triggering the evacuation of the chemistry department and leading to a bomb disposal team being called in to perform a controlled explosion on the material. The details of exactly what occurred have now been released by the university, which is treating the incident as a learning experience.

The third year PhD candidate involved immediately raised the alarm when he realised he had potentially made over 30g of TATP in solution. ‘The situation as we came to it was that we had, potentially, a lot of this material which presented an explosion hazard but the risk of explosion in solution was small,’ explains Nick Norman, head of Bristol’s school of chemistry. They considered disposing of the TATP via chemical degradation or diluting it to make it safer, but given the quantity, decided that an emergency response was the best course of action. ‘It could have crystallised later and solidified, so we wanted to get rid of it quickly.’

We are certainly going to tighten up on the specific risk assessments around using hydrogen peroxide. It was a dramatic event, believe me!

As a dry solid, TATP is an extremely sensitive white crystalline powder that can explode under heat, friction or mechanical shock. Being difficult to detect and made from reasonably common chemicals it has gained notoriety as a weapon used by bomb-making terrorists, some of whom have dubbed it ‘The mother of Satan’ because of its instability.

‘TATP presents a significant hazard and we agreed that evacuation of the building and involvement of a bomb disposal team were appropriate precautions,’ says Tom Baker, a senior consultant at the National Chemical Emergency Centre which provided chemical advice to Avon Fire and Rescue Service as part of the response to the incident. ‘The dangers of concentrating peroxides via rotary evaporators are often overlooked and have caused numerous accidents.’

The student accidentally made TATP when following a risk assessed protocol from the literature to oxidise an aldehyde to a carboxylic acid using aqueous acidified chlorite. The reaction used 50ml of acetone as the solvent and generated some by-products associated with a yellow colour of the solution. One of these by-products potentially included a small amount of chlorine dioxide, which the risk assessment identified as toxic.

The literature indicated that 30% hydrogen peroxide should be added until the solution was no longer yellow, indicating the removal of the by-products. By focusing on removing the chlorine dioxide and waiting for the yellow colour to vanish instead of calculating how much hydrogen peroxide would be needed, the student ended up adding about 50ml of hydrogen peroxide, when 1ml would have sufficed. The hydrogen peroxide reacted with the acetone to form TATP and could have formed as much as 30-40g. ‘It was the focus on one hazard that led to the ignoring of another, even though both had been identified in the original risk assessment,’ explains Norman.

When the student went to remove the solvent he found it wasn’t decreasing in volume and the liquid was becoming viscous, raising alarm bells. Following GCMS analysis the presence of TATP was confirmed. ‘In an ideal world they wouldn’t make that mistake, but they did and they admitted it and informed the supervisor and me immediately, and that’s commendable,’ says Norman. ‘The last thing we want is people trying to cover things up or deal with it themselves for fear of getting into trouble.’

Although similar reactions that oxidise aldehydes using safer chemicals exist, the risk assessment of the literature protocol which the student followed identified the hazards, providing reassurance that there was no need to consider a different approach. Norman says that safer ways to perform this reaction should be looked at and taken note of in future.

‘The key lesson is that a potentially serious incident was averted by a good safety culture. When the danger was realised the researchers understood their responsibilities and were able to take appropriate action,’ says Baker.

‘We have tried very hard to establish a safety culture where people feel able to tell someone about a mistake. The airline industry does the same thing,’ says Norman. ‘If something goes wrong you need to know about it so that you can take appropriate action and help ensure it doesn’t happen again. We are certainly going to tighten up on the specific risk assessments around using hydrogen peroxide. It was a dramatic event, believe me!’ he adds.