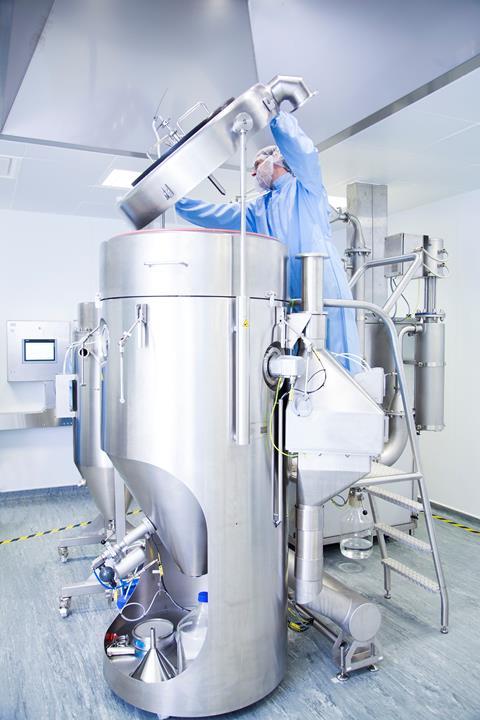 Somewhere in the world, a patient does the most unremarkable thing: they take their medication. Swallowing a tablet is an action repeated by so many others around the globe every day that it has become an ordinary occurrence. But the action of those very drugs is anything but. Thanks to decades of drug discovery and innovation, many modern medications can make their way from a patient’s mouth all the way to the specific site of action, without the patient having to do anything else but swallow. But is it as simple as that every time?

To be a functional orally administered medicine, drugs need to dissolve in a patient’s gastro-intestinal (GI) tract in order to enter the blood system and reach the site of action. While this may sound self-evident, it has been estimated that over 80% of new chemical entities (drugs) in the pipeline have very poor water solubility.1 It is not unusual to find a drug which is less soluble than marble. What can be done if a newly discovered drug, showing promising efficacy, is insoluble? Can a tablet medication be viable? Fortunately, there is a technological process available that can help that viability: spray drying.

Spray drying is a method by which dry powders and pellets are produced from a liquid via rapid drying. Whilst it sounds futuristic, the practice of drying liquids into powders is not new, and even dates to the days of Kublai Khan, the 13th century ruler of the Mongol Empire and emperor of China. But on an industrial scale, spray drying as we know it properly began in the mid-19th century. The first recorded mention of an industrial-type spray-drying method is in a New York patent from 1872. In the document, Samuel Percy claims to have ‘invented a new and Improved Process for the Simultaneous Atomizing and Desiccating of Fluid and Solid Substances, and its application to the purpose of the exhaustion of moisture from such substances’. And, fundamentally, the process has not really changed since then. But there have been improvements.

Historically, spray drying has found routine applications in the production of some foods and detergents. But its prevalence in the pharmaceutical industry has been increasing with the upsurge in poorly soluble drugs coming out of discovery. Using spray-drying processes, drug manufacturers can vastly increase the bioavailability of a drug’s active pharmaceutical ingredient (API). Further, solid dispersion (a drug incorporated within a matrix, most often a water soluble polymer) spray-drying technology can be applied to the development of products from laboratory to commercial scale with a wide range of powder characteristics.2,3

Creating an effective spray-dried dispersion (SDD) is a multi-step process. First, a low-water-solubility drug is dissolved in a mixture of solvents and polymers, which help stabilise the solution. Once dissolved, this solution is then pumped through a nozzle, atomising it and producing tiny liquid droplets. These droplets are rapidly dried in a chamber using nitrogen or another inert gas, locking the drug in a polymer matrix.

During the process, the drug is transformed from its usual ordered crystalline state to become a disordered, amorphous material. The formation of an amorphous SDD with control of particle size, surface area, porosity and wettability results in improvements in bioavailability. This altered state makes the drug disorganised enough to readily dissolve in the body.

Controlling this kind of disordered substance is no small task. Amorphous materials are simply more reactive and prone to issues such as degradation or recrystallisation, potential changes that can affect the shelf-life and effectiveness of a medicine. A vital role of an appropriately selected polymer in a solid dispersion is to reduce the molecular mobility of the drug to avoid the phase separation and recrystallisation of drug during storage. In addition, the solvents used to dissolve the drug and polymer must be removed for patient safety – many solvents have strict residual limits in the parts per million range. Such levels require the precise control of the process.

As with many pharmaceutical processes, scientific know-how and experience in a regulatory-controlled environment is critical to the successful formulation of spray-dried medicines. Companies like Juniper Pharma Services, a Nottingham-based contract development and manufacturing organisation, are helping lead the way in the global pharmaceutical industry when it comes to solving formulation challenges. Juniper uses state of the art GEA spray dryers, and applies its in-depth materials science and analytical expertise during development to ensure a robust process is achieved. By necessity, advanced tools such as x-ray diffraction and vibrational spectroscopy are routinely applied to understand and overcome stability issues that if left unresolved would mean failure of a new medicine to reach patients.

Successful examples of poorly water-soluble drugs that have been transformed by spray drying already exist, and can act as models for the future up-scaling of the technology. For example, cefuroxime axetil, the world’s largest selling cephalasporin antibiotic and listed as one of the World Health Organisation’s essential medicines, can only be absorbed by the body in an amorphous form, making spray drying essential to its production. Thanks to GlaxoSmithKline’s spray-drying process, this antibiotic can successfully be administered as a tablet, as opposed to an injection. Today, cefuroxime axetil prevents the growth and spread of bacterial infections such as tonsillitis, chronic bronchitis and early Lyme disease, improving the health of millions around the globe. And that is the real benefit of spray drying, making APIs more bioavailable so that there can be more drugs targeting unmet medical needs.

For those who live without frequent or chronic health conditions, the term spray drying holds little relevance. But for those afflicted with the conditions that necessitate long-term medication, the relevance can be profound.