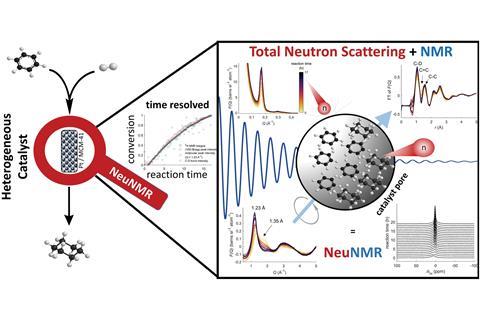 Scientists in the UK have combined NMR with total neutron scattering techniques to gain greater insight into liquid-phase reactions occurring in confined pores.

The technique, which resulted from a collaborative effort between Mick Mantle, at the University of Cambridge, Chris Hardacre, at the University of Manchester and scientists at Queen’s University Belfast and the Isis pulsed neutron and muon source in Oxfordshire, has been named ‘NeuNMR’. It performs in situ total neutron scattering measurements in conjunction with NMR and, as a proof of concept, was tested on the widely used Pt/MCM-41 catalyst in the heterogeneous reduction of benzene to cyclohexane.

Since neutrons interact with nuclei and not electrons, they are able to discriminate between neighbouring atoms and isotopes, and are extremely penetrating through atoms. ‘Neutron scattering is proving increasingly useful in catalytic studies’, comments Richard Catlow, a catalysis expert based at University College London in the UK, who was not involved in the research. ‘It gives you extremely useful structural information on a complex system that is difficult to probe otherwise.’

‘The main drawback of performing these techniques in separate experiments in different laboratories is that reaction conditions will never be exactly the same; thus definitive conclusions about catalytic kinetics and mechanisms are ambiguous,’ explains Mantle. ‘By combining the two techniques in one sample chamber we ensure that the reactions conditions in terms of sample temperature and pressure are identical. This is particularly important as the NMR provides the composition as a function of time for the neutron analysis.’ 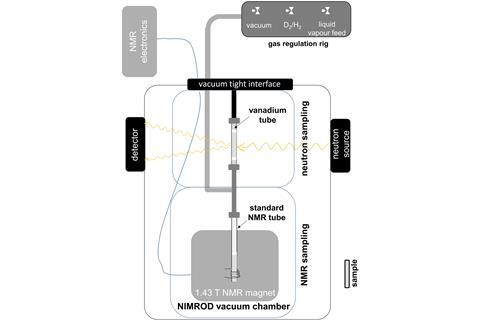 When asked how complicated the experimental set-up is, and how easily applicable it will be to other reactions, Mantle says the set-up is challenging in terms of the limited physical space available within the neutron chamber. ‘The addition of an NMR spectrometer requires the NMR spectrometer electronic console to be located outside the neutron chamber with only the NMR magnet being present in the chamber itself. As the chamber is under a vacuum during operation, heat generation and dissipation must be carefully considered and addressed. In principle, many other reactions can be studied using the existing combined NeuNMR set-up. The main thing to consider is the use of H/D isotopic exchange to maximise the neutron and NMR sensitivity and the presence of solvents.’

The group’s next steps include testing and developing the existing apparatus to monitor reactions under continuous flow conditions. Discussions are also underway to see if the NMR apparatus can also be combined with other forms of synchrotron radiation, such as x-rays. ‘This [work] has the potential to provide both life and physical sciences research communities with unparalleled physicochemical and structural information covering a vast range of length scales from nanometers to millimetres,’ adds Mantle.

Hannah Dunckley is completing a PhD under the supervision of Chris Hardacre.