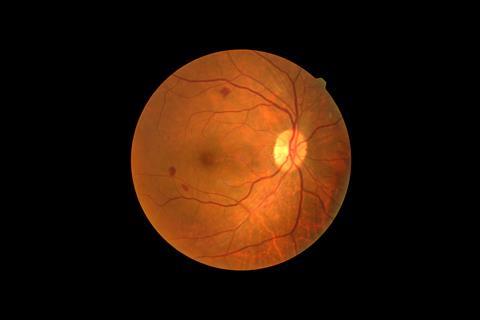 Damaged retinas, such as the one highlighted here, could eventually be replaced by artificial ones made from 2D materials.

A new artificial retina based on the 2D materials graphene and molybdenum disulfide offers significant advantages over current retinal implants aiming to restore sight to blind people. Animal studies of the prototype have shown promise, and the technology also has applications for monitoring heart and brain activity.

As conventional retinal implants are silicon-based, they are rigid and flat, and therefore can distort vision and damage the retina, as well as the optic nerve. In search of a better option, a research team led by University of Texas at Austin material scientist Nanshu Lu and colleagues at Seoul National University in South Korea, built a hemispherical soft implantable optoelectronic device using molybdenum disulfide as the photosensitive semiconductor, graphene as the interconnector and thin layers of gold, alumina and silicon nitrate to make the array especially flexible and dense. As the total thickness of the material is only 1μm, it fully conforms to the shape of the retina.

The team has taken its work further to demonstrate another example of soft 2D material-based bioelectronics. The researchers placed these same sensors on the surface of the faces of human research participants, who were then able to remotely control a drone with their eye movements. A laptop can receive wireless electrooculogram (EOG) signals from the surface of the electrodes, and use these to control the drone based on the direction the person rotated their eyes. ‘There is no camera on the drone, the drone is purely controlled by the laptop, which is measuring the EOG signals from the surface of his face,’ Lu explained.

However, considerable work remains to get the team’s artificial retina to achieve real human vision in terms of pixels and colour matching. In addition, cost remains a concern because 2D materials like molybdenum disulfide are much more expensive than silicon and harder to fabricate.