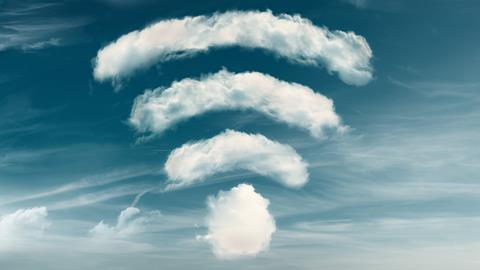 Legend has it that the invention of radio was driven by Marconi’s search for a way to transmit electrical power wirelessly, while Tesla also attempted to develop wireless power transmission. Now, that notion has come full circle with the invention of a molecular antenna that can harvest the energy from the ubiquitous wifi signals all around us.

The team from the US and Spain has developed a flexible ‘rectenna’ using two-dimensional molybdenum disulfide. A rectenna is a rectifying antenna, a device that absorbs electromagnetic energy and converts it into direct current (DC) electricity. The team explain that the problem with flexible, wearable devices, remote sensors and medical implants and smart medication is finding ways to power them. The invention of a device that could be embedded into such systems to harvest energy from the environment offers a simple solution to providing the necessary wattage for low-power devices.

Wifi operates at two distinct frequencies, 2.4 and 5.9GHz. Unfortunately, while these are accessible to powered receivers of the kind we have in computers and mobile devices, those frequencies have not been accessible to flexible semiconductor rectennas. The problem lies in the limited transport properties of holes and electrons in such materials. Now, Tomás Palacios of the Massachusetts Institute of Technology and colleagues have demonstrated an atomically thin and flexible rectenna based on a molybdenum disulfide semiconducting–metallic-phase heterojunction. Tests with the rectenna using a houshold wifi source showed that it could harvest energy from the signal and generate 48μW, and the team say that there’s still much room for improvement. 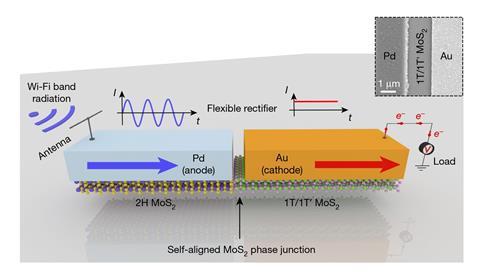 The flexible rectenna makes use of a 2D molybdenum sulfide surface

The team explains that their device has a cut-off frequency of 10GHz, which is well above the wifi standards and represents an order of magnitude improvement over current state-of-the-art flexible rectifiers. Moreover, their rectenna operates at up to 8GHz, which they point out covers most of the unlicensed industrial, scientific and medical radio bands, including wifi channels.

‘This work represents a key milestone for building a high speed flexible platform that can be promising for wirelessly charging future ubiquitous electronics using the existing wifi infrastructure as an energy hotspot,’ the team concludes. Palacios tells Chemistry World that his team are now working on developing sensors and other systems that they can connect to the rectenna. He adds: ‘In parallel, we are developing the manufacturing technologies to scale the area up that we can cover with the rectennas.’

‘Like organic polymers, molybdenum disulfide monolayer materials are flexible,’ points out Amilra de Silva of the Queen’s University Belfast, a pioneer in the world realm of molecular electronics. ‘These allow the creation of flexible diodes with low capacitance which are fast enough to rectify [approximately] 10GHz wifi fields when coupled to metal antennae about a millimetre in length. Thus, a ubiquitous DC source becomes available for low-power charging applications, which would be well-suited for wearable and distributed electronics.’