Around 50 mice have been given the science fiction superpower of seeing infrared light that is normally invisible, thanks to nanoparticles researchers in the US and China implanted into their eyes. ‘The surprise is that they can even sense very dim infrared light well,’ says Gang Han from the University of Massachusetts Medical School.

The scientists gave the mice the ability seen in films such as Predator using nanoparticles that convert infrared to green light. Together with Tian Xue’s team at the University of Science and Technology of China in Hefei, Han’s group coupled nanoparticles with proteins that attach to rod and cone photoreceptors in the eye. After the ‘Predator particles’ are implanted, they attach to photoreceptors in the retinas at the back of the mice’s eyes, letting them detect low-level infrared. ‘Somehow it looks like their eyes are more sensitive than the equipment in the experimentation,’ Han says.

Xue and Han came up with the idea specifically to apply for funding from the international Human Frontier Science Program. The program supports research ‘deemed to be sci-fi and not easy to accomplish’, Han says. ‘This is cutting-edge stuff that could be very hard to achieve.’

In developing the proposal, Han’s team brought its expertise in upconversion nanoparticles that convert light from one colour to another. Combining inorganic host molecules with lanthanide dopants, in this case yttrium, ytterbium and erbium, these nanoparticles can increase light’s wavelength and energy. ‘They can convert infrared photons that are at the low-energy end of the electromagnetic spectrum and convert that to the high-end, which is visible light,’ Han explains.

Xue brought his expertise in biochemical systems enabling vision – including photoreceptors – which exploit organic pigments to sense light to the team. ‘They have good sensitivity in the visual range, but beyond 700nm, in the infrared region, the signal is bad and noise becomes dominant,’ Han explains. The researchers realised that upconversion nanoparticles could potentially shift infrared light to the more sensitive visible range. 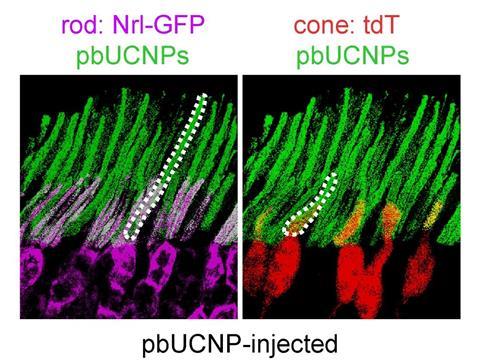 But once they’d won the grant, they knew they faced a big challenge in producing sensitive infrared vision. That’s because activating upconversion nanoparticles usually requires laser light, whereas most infrared sources are not that intense. So the researchers tried positioning them right next to the rods and cones so that mice sense the green light as soon as it’s produced. The team therefore covalently linked nanoparticles to the glycoprotein concanavalin A, which binds tightly to sugar molecules on photoreceptors’ outer membranes.

It soon became clear that these were the desired Predator particles, firstly because they bound to sugar-based molecules in test systems. The researchers then watched them bind to rods and cones under the microscope. Concanavalin A ‘glues the particles so that they can stick to the photoreceptors after sub-retinal injections’, Han says. ‘These particles homogeneously distribute and tightly bind to the photoreceptors, and don’t cause retinal degeneration or anything else.’

Supermice to superdogs, but no superhumans yet

The scientists then proceeded to conduct many detailed tests of safety and infrared vision in mice. These included a water maze experiment, where the researchers trained mice to swim to hidden platforms indicated by an infrared pattern on a screen. When they changed the location of the platform, they moved the screen showing the right infrared pattern with it. ‘The mice could still find it if they had been injected with particles,’ Han says. ‘But without the particle injections they were lost.’

Han emphasises that the mice are simply seeing the 535nm-wavelength green light the Predator particles emit, rather than a completely new colour. ‘If the mice see a green triangle and an infrared triangle, it’s exactly the same,’ he says. ‘But we can see it’s compatible with ambient light, as we did experiments open to bright rooms. We also have visible patterns on top of a near-infrared background and the mice can still tell the difference.’

Xue and Han’s teams ‘make the invisible visible’, observes Kristof Zarschler from the Helmholtz-Zentrum Dresden-Rossendorf in Germany. ‘This ground-breaking publication literally opens up our eyes for a completely new area of application for this unique kind of nanomaterial,’ Zarschler says. ‘This sensational report is excellent news for patients with visual dysfunction. Now it is of particular interest to further investigate how long this visual ability enhancement actually lasts after a single administration.’

Han say they now want to move from supermice to superdogs. ‘We could deploy animals with this super capability to help people,’ he says. Han also warns  ‘biohackers’ who might try the technology themselves to wait until it is approved by regulators like the US Food and Drug Administration. ‘If we use it in human beings we’d want to prove it is safe,’ he says.