A new 3D printing system developed by researchers in the US comes closer than ever before to printing tissues and organs that could be transplanted into patients to replace missing or injured body parts. The researchers demonstrated they could print three different tissue types – bone, muscle and a human-scale ear made of cartilage – that continue to survive and develop several weeks after being transplanted into animals. 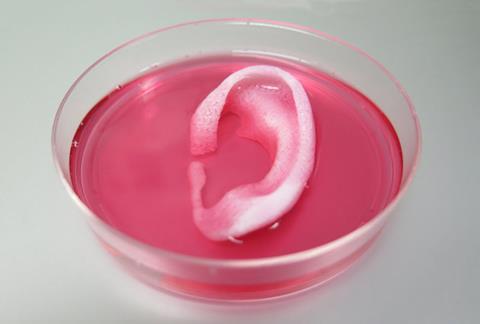 ‘[Previously] the limitation was that you couldn’t print large constructs, because the cells wouldn’t survive,’ says Anthony Atala at Wake Forest Institute for Regenerative Medicine in North Carolina, US, who led the work. This is because the ‘diffusion limit’ prevents clusters of cells that are more than a few hundred micrometres thick getting enough oxygen and nutrients from the growth medium. Another issue that currently rules out printing large tissues is the challenge of maintaining the structural integrity of soft cell-laden ‘inks’ while they are being printed into a 3D shape.

The system that Atala and colleagues developed addresses both of these hurdles. To support the tissue, a soft, nutrient-rich hydrogel containing living cells is printed alongside a biodegradable polymer ‘mould’ that holds the tissue together at first, but biodegrades over time. The team also printed microchannels into the structures to provide space for oxygen and nutrients to be fed to the tissues, much like a system of blood vessels in actual organs. This part of the system took several years to develop, says Atala, partly because of the difficulty of printing such small microchannels. ‘You really need precision to get down to capillary size. The nozzles that we designed go down to 1/80th the diameter of a human hair,’ he says.

As a proof-of-concept, the team printed examples of different tissue types using this approach and were able to transplant muscle and bone tissue into rats, and a full size ‘human’ ear under the skin of a mouse. When they re-examined the tissue after several weeks – or in the case of bone fragments five months – they saw that vascular tissue had begun to develop in the spaces left by the microchannels. 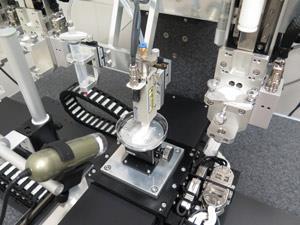 The system at work printing a jaw bone structure

Another important part of the system is the ability to precisely design the shape of the tissue being made using computer models to produce a template for the printer. To demonstrate this, the team printed a fragment of bone using human stem cells that was the right size and shape to replace a damaged portion of jaw bone. ‘We’re now looking at the long term viability and safety of the structures,’ says Atala.

Brian Derby, a biomaterials researcher at the University of Manchester, UK, calls the work ‘a great bit of engineering’. He explains that several groups are working on similar technology – such as combining a soft cell medium with a harder polymer for structure – but Atala’s group is the first to put the different elements together and get them to work. ‘Demonstrating three different tissue-like structures, which they’ve implanted into animal models is a great demonstrator of what can be achieved with current technology if you can package it all together in one unit,’ he says. ‘It is a fantastic achievement.’