Researchers in the US have found a way to 3D print ‘impossible’ shapes – including a thin tube tied in a knot – out of soft materials by injecting the inks into a gel that solidifies and traps them in place. The team say their technique overcomes several limits of 3D printing, and could be useful for tissue engineering.

The use of 3D printing is growing in popularity, and researchers are using it to create ever more complex structures, including microfluidic systems, soft robots and even a bionic ear. But there are still limitations to the types of shapes that can be printed, particularly when making soft structures that collapse easily.

To address this, Thomas Angelini and colleagues at the University of Florida took advantage of the physical properties of a commercially available granular hydrogel made up of 7µm-wide particles (Carbopol EDT 2020). The gel is able to rapidly switch from a solid to liquid state in response to shear stress. By using it as a matrix material for 3D printing, the limitations of using a stiff, more solid matrix, which could be damaged by the moving parts of the printer, or a liquid one, which would not be able to support a detailed structure, were overcome.

‘The granular gel medium yields, fluidises, flows and self-heals locally and rapidly around the moving printing needle,’ says Angelini. ‘When the inks are printed into the gel, they are trapped.’ Because the gel solidifies around the ink and holds it in place, he adds, any complex shape can be drawn in it, after it has been pre-programmed into the system. ‘3D printing is no longer a game of specially made solidifying materials or optimally matched support materials,’ he says. 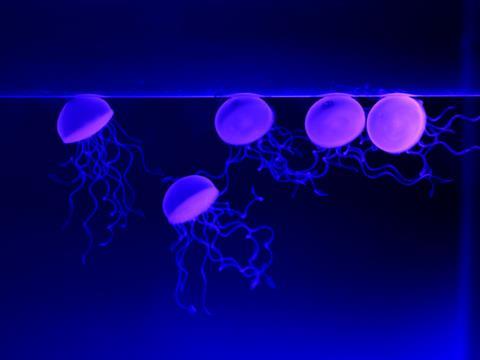 And the gel is compatible with many ink materials, as it shares a common solvent. ‘Polymeric inks having a huge range of viscosity can be printed, colloids can be printed, living cells can be printed – all with almost no modification of the granular gel medium,’ says Angelini. If cross-linked polymers are used, they solidify and separate from the gel, whereas softer materials like cells can stay put indefinitely, supported by the matrix.

The team demonstrated their technique by writing several intricate designs into the gel, including nesting Russian dolls that are contained within one another, a detailed model of a jellyfish and a knotted tube that would otherwise be impossible to create using traditional 3D printing methods. ‘In the case of the knot, the hanging parts of the loop are created and then later connected to the rest of the knot. Without the trapping action of the granular gel medium, these parts of the knot would just fall downward as they are printed,’ explains Angelini.

The technique’s potential applications are varied, and include building components for flexible electronics and engineering smart materials. But Angelini and colleagues are particularly interested in its potential to improve the field of tissue engineering. One day, similar approaches could be used to create complex tissues and organs for use in medicine, Angelini says, although this is still a long way off. The use of granular gels could, however, have a more immediate impact in research, helping to create surrogate organs and other structures that could be used as training aids for medics to practice on. ‘We are currently building the 3D printing machines for our surgeons here at the University of Florida. We have already 3D printed a quarter-scale model of a whole brain out of hydrogel,’ Angelini says.

Brian Derby, a materials scientist at the University of Manchester, UK, says the technique was clever, but ‘unlikely to be earth shattering’. ‘The idea of writing something inside a fluid to give it support has been done before,’ he says. ‘The way they’re doing it using a highly shear-rate sensitive gel is new … there will be some specific examples that [the technique] is particularly good for. But it’s very niche, it would be difficult to do it fast.’

Derby also points out that printing objects inside a gel matrix can sometimes make it difficult to retrieve them. Angelini agrees that separating 3D models from the gel is an area that could be improved, and says his team are currently developing new granular gels that allow easy separation.