Chemistry of one of Earth’s rarest elements remains mysterious, though not for lack of trying 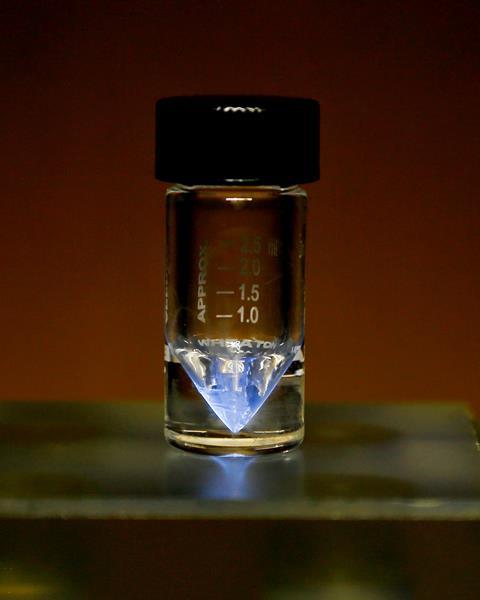 The ionic radius of actinium(III) may be far smaller and closer to the lanthanides than the most recent measurements from the 1950s and 70s suggest, a review by researchers at Lawrence Livermore National Laboratory, US, has found. This could have potential ramifications for cancer therapies.

Actinium was discovered by French chemist André-Louis Debierne in 1899. But it exists in such small quantities naturally – usually from the radioactive decay of heavier elements – that it can’t be extracted and used in experiments. Instead, researchers rely on actinium created in nuclear reactors. Even so, the element is often in short supply, with only microgram quantities available to a handful of teams around the world.

This means experimentalists have to be selective in the research they perform, often relying on data from earlier work. This is why much of the element’s chemistry remains a mystery. Now, a group led by Gauthier Deblonde at Livermore’s Seaborg Institute has taken a forensic approach to previous data, predominantly crystallography during the 1950s and 1970s, comparing it with more recent x-ray absorption experiments.

The results suggest the ionic radius has been overestimated by 0.06Å, a significant distance for an actinide. This, Deblonde and colleagues conclude, is likely due to the complexity of working with of actinium – which has few spectroscopic features, is colourless, not fluorescent and diamagnetic, as well as incredibly short-lived – and the probable contamination of the sample with traces of radium.

The review is particularly important given actinium-225’s increasing promise as an anti-cancer therapy. Complexes of actinium with a chelating dodecane tetraacetic acid ligand (Dota) are being investigated in several types of cancer. ‘This correction very nicely explains why the actinium cation fits into the cavity of Dota ligand, for which it is supposed to be too large,’ says Ekaterina Dadachova, a pharmacy researcher at the University of Saskatchewan, Canada, who specialises in radiotherapies. ‘It also helps to explain why actinium was ‘slipping out’ of the grip of many macrocyclic ligands specifically designed for it.’ 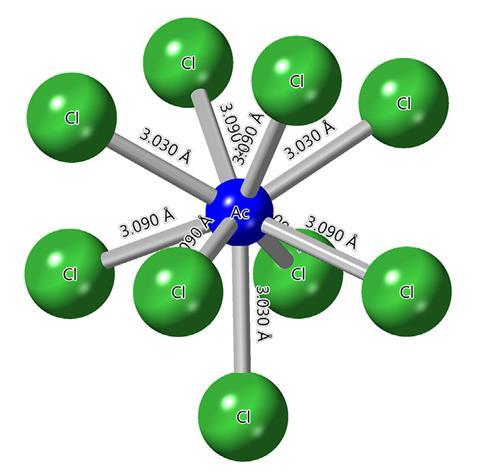 Actinium trichloride’s structure was reported in 1948

While actinium-225 is considered an important potential therapy, it’s not the only actinium isotope that’s found a use; actinium-227 is essential as a precursor to radium-223, a chemotherapy agent approved in more than 50 countries. In 2018, the US Department of Energy entered into a 10-year commercial agreement with Bayer to supply the pharma giant with the isotope from its reactor facility at Oak Ridge National Laboratory.

Justin Wilson, who studies radioactive metal complexes in medicine at Cornell University, US, agrees. ‘The revised ionic radius put forth in this study will be of significant value to the research community, especially in light of the very promising therapeutic properties of actinium-225.’ With the modern spectroscopic equipment now available, Wilson adds, ‘it is likely that we will learn much about this elusive element’.