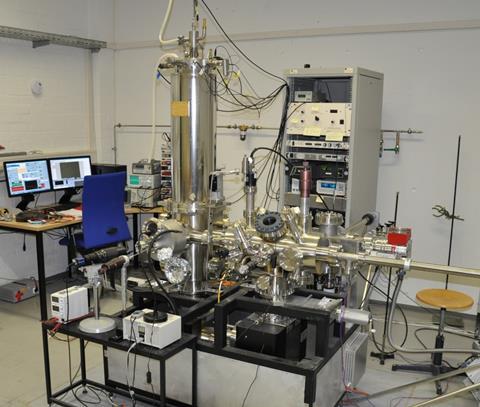 Driven by their existing awe-inspiring microscope images of individual atoms to look even closer, scientists in Germany have realised that they can watch bonds form between pairs of atoms.1 Franz Giessibl at the University of Regensburg and colleagues tracked the force a carbon monoxide molecule exerts on individual atoms in sub-atomic resolution – and made a new interpretation.

The carbon monoxide first associates with metal atoms through weak van der Waals forces, known as physisorption. Now, the researchers have studied the change to stronger direct bonding, known as chemisorption. ‘We can actually record the textbook energy curve that describes a transition from physisorption to chemisorption in a real experiment, almost 90 years after it had been described by Sir John Lennard-Jones,’ Giessibl tells Chemistry World. ‘We don’t know of any other observations at this level of detail at this time.’

In 2015, Giessibl’s team had published sub-atomic resolution atomic force microscopy (AFM) images of single copper and iron atoms.2 In painstaking experiments, his team first places the carbon monoxide molecule on an AFM instrument’s copper tip. They then scan it across individual atoms, mapping tiny changes in force over scales of a few picometres, or a few quadrillionths of a metre. But what they found puzzled them.

‘At that time, it was assumed that carbon monoxide tips essentially imaged the total charge density of a sample,’ Giessibl explains. That should mean that repulsive force at the tip was greatest at the atoms’ centres, meaning that they looked like spheres in the AFM images. Instead the repulsion fell at their centres, and they appear as rings. Some scientists thought that the effect might come because the carbon monoxide molecule tilted, a known problem for interpreting such AFM images.

Giessibl’s PhD students Ferdinand Huber and Julian Berwanger looked closer at the interaction with iron atoms. After an initial van der Waals attraction force, they recorded repulsion, as expected. But then an even stronger attraction emerged. It gradually became clear to them that this was the result of chemical bond formation. The carbon monoxide tip was undergoing the change from physisorption to chemisorption on the metal atoms.

A van der Waals bond between the carbon monoxide tip and an iron atom creates an attraction with 5meV potential energy, Giessibl explains. After overcoming repulsion, a chemical bond with 80meV potential energy develops. ‘While this bond is still weaker than the bond between the carbon end of the carbon monoxide molecule and the copper AFM tip, it is 16 times stronger than the van der Waals bond.’ 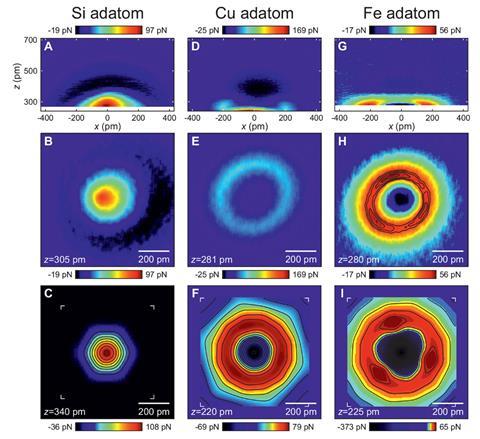 The researchers saw a similar effect with copper atoms, but not silicon atoms. Instead, after the initial weak van der Waals attraction, silicon created repulsion with the expected spherical appearance in AFM images. This evidence suggested that the scientists were seeing chemisorption with metal atoms like iron and copper, but not semimetal silicon.

To make the case even more compelling, Hubert Ebert’s team at Ludwig Maximilian University of Munich helped explain the observations using density functional theory (DFT) calculations. Their simulations showed that the images relate to hybridisation of electron orbitals in the metal atoms and the carbon monoxide tip’s oxygen atom. Consequently, Giessibl says that ‘it is proper to call this a bond formation.’

The study shows that the AFM tip ‘needs to be included in any consideration of the interpretation of atomically-resolved images,’ comments Ulrike Diebold, a surface physics expert from the Vienna University of Technology, Austria. ‘The quality of the data is outstanding. It also shows convincingly where the contrast – a bright ring around an isolated copper or iron atom on top of a surface – comes from.’