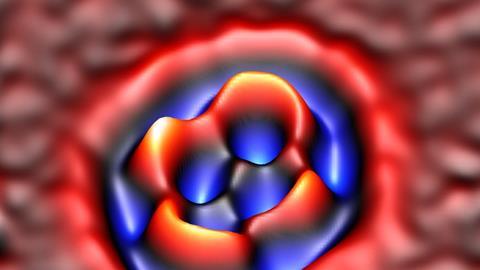 Pioneering AFM analysis has been used to further investigate the chemical diversity of the famous Murchison meteorite that exploded over Australia in 1969. It is hoped that the successful trial of this highly sensitive technique could lead to the discovery of new molecules in meteorites and samples from space missions.

Initial analysis of the Murchison meteorite after its discovery showed that it is a carbonaceous chondrite, meaning that it is a remnant from the early days of the formation of the solar system. As the meteorite was so large, weighing more than 100kg in all, many studies have investigated the fragments using a range of analytical methods to gain insight into the formation of planets and the delivery of organic molecules to the early Earth.

Now, the group of Leo Gross at IBM Research in Switzerland has teamed up with researchers from Nasa and elsewhere and have added AFM to the list of techniques used to investigate the meteorite. The Zurich researchers developed high resolution AFM with a carbon monoxide-functionalised tip to resolve organic molecules at atomic resolution in 2009, enabling them to identify components of complex mixtures. They recently applied this to lab-made molecular mixtures that mimic those observed in space, such as the organic haze on Jupiter’s moon Titan.1 With samples from the Murchison meteorite, the researchers got the first opportunity to apply the method to molecules that actually arrived from space only a few decades ago.2

The researchers developed specific methods to extract molecules suitable for AFM, such as flat polyaromatics and some linear hydrocarbons, and transferred them onto a substrate for study. From the images obtained, they could identify numerous molecular species, such as 1-propylnaphthalene or pyrene, all of which are in agreement with results obtained by mass spectrometry. 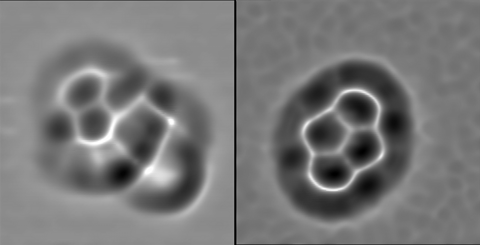 Small molecules from the Murchison meteorite were identified using AFM. 1-propylnaphthalene is on the left and pyrene on the right

While the study brings no surprises on the composition of this well-studied meteorite, the researchers say this demonstrates a proof of principle that even single molecules of a mixture can be identified, opening the possibility of identifying rare substances that have been missed in previous analyses.

‘We needed to show this proof of concept to request and obtain larger meteorite samples,’ Leo Gross tells Chemistry World. ‘We plan to advance the chemical extraction of the samples, the on-surface preparation and also the AFM detection. I think that by the help of AFM, we will detect molecules that are so far unknown in meteorites, and I am curious what we will find.’

‘I knew that pyrene was present in the Murchison meteorite, but only by its fluorescence in extracts or as a peak revealed by mass spectrometry,’ says David Deamer from the University of California at Santa Cruz, US, who has also studied materials from this meteorite. ‘It’s amazing that atomic force microscopy allows us to see a single molecule of pyrene more than five billion years old, older than the Earth in fact, which was probably synthesised on dust particles ejected from a dying star.’