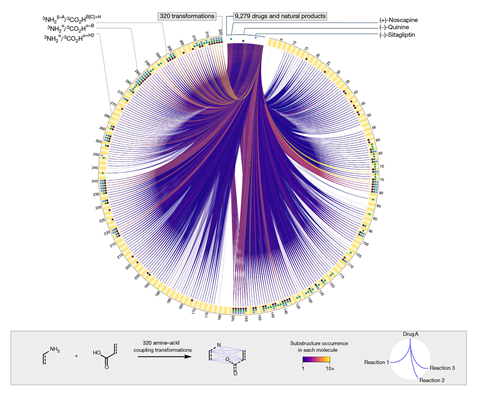 A chemoinformatics approach has been used to map 320 different ways to obtain amides from carboxylic acids and amines. The new exploration method can be applied to any set of reactants, opening many possibilities for manual or automated reaction discovery.

The structure and properties of pharmaceuticals and other important products are determined by chemical transformations, so reaction selection can influence how a candidate drug molecule will behave. Currently, a limited number of chemical transformations is used to produce most medicines. Amide coupling, which involves combining an amine and a carboxylic acid to form an amide bond, is very popular in chemical synthesis, being used in a quarter of the reactions reported in small-molecule pharmaceutical patents. But there are hundreds of other ways to connect these two common functional groups together, say Tim Cernak of the University of Michigan and his team.

‘Our work suggests that there is a whole new axis of chemical-space exploration that is largely untapped within chemical reactions,’ Cernak says. ‘We tend to focus on specific reactions, we teach young organic chemists to memorise lists of “named reactions”, but here we show that in very local areas of reaction space, there are many conceivable reactions out there and each one produces a molecule with a different set of properties.’

Being able to control features such as the molecular weight or the number of hydrogen-bond donors in a molecule is very important in drug discovery and compound design. This is usually achieved by varying the starting materials iteratively or in a combinatorial manner, but Cernak believes that this could be done in a much simpler way, without having to try different building blocks. ‘We hope to control the properties of molecules using the reaction,’ he says. Starting from a single amine and acid, the researchers demonstrated that it is indeed possible to obtain products that are acidic, basic, lipophilic or hydrophilic. ‘These properties tend to correlate with important macroscopic functions like metabolic stability or cell permeability,’ explains Cernak.

To study the contribution of chemical transformations to properties, the team developed a string-based notation and used a combinatorics approach to create a map of plausible amine–acid coupling transformations which can be charted using chemoinformatic methods. ‘A key component was building an environment where computer scientists and chemists were developing the map together,’ points out Cernak. ‘The cool thing is that all of these conceivable reactions can be found as substructures in drugs or natural products, so if the reactions do one day exist, they can be used to make meaningful molecules with common bond arrangements.’ The scientists also demonstrated a dozen of the transformations experimentally. ‘One that we are really excited about is a new copper-mediated reaction that swaps a C–N bond for a C–O bond,’ says Cernak. ’This reaction was discovered using a high-throughput catalyst screen.’

Marty Burke from the University of Illinois at Urbana-Champaign, US, mentions that the new approach could be applied to many other types of building blocks and functions. ‘This breakthrough powerfully shows, in one striking glance, many different ways two molecular Lego bricks could be snapped together to create new potential medicines,’ he says. ‘Interfacing with other state-of-the art automation technologies further stands to magnify considerably the tremendous discovery potential inherent in Lego-like molecular construction.’

Peter Seeberger at the Max Planck Institute of Colloids and Interfaces in Germany agrees that the method could be combined with an automated synthesis platform to rapidly explore reactions, discover new scaffolds and prepare pharmaceutical substances in entirely new ways. ‘The chemoinformatic analysis points to reactions that should be explored and the automated systems, such as our radial synthesiser as well as systems developed by others, can then rapidly work through the experiments. In this way, the chemist can focus on the creative exploration of new reactions. This is shown for amide linkages here but is true for many other key transformations that should be explored now.’