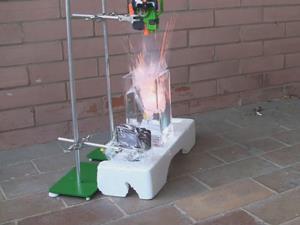 The chemistry behind dropping sodium into water and watching it explode may require a rethink, according to scientists in the Czech Republic. They say the violent reaction may be triggered not by the ignition of hydrogen gas, as previously thought, but by large charge instabilities within the metal.

An alkali metal exploding in water has been a practical mainstay for teachers wanting to show the volatile power of chemistry to their students, with many explaining the process as electrons leaving the metal to form hydrogen, which then ignites to produce a small blast. But Pavel Jungwirth and his colleagues from the Academy of Sciences of the Czech Republic were unsatisfied with this explanation.

‘There is this one important condition for explosive behaviour and that is you need to ensure an efficient mixing of reactants – like gunpowder,’ says Jungwirth. ‘When the reaction [between sodium and water] starts running you are developing hydrogen and steam, and that’s actually a buffer layer that separates the reactants – so the reaction should self-quench, it shouldn’t be explosive.’

He goes on to argue that if you carry out the classic high school demonstration ‘it sometimes explodes and sometimes doesn’t’ because the conditions may not be right, which hints at the importance of reactants remaining in direct contact to produce an explosion.

To investigate, Jungwirth and his colleagues dropped a sodium-potassium alloy droplet into water and watched the ensuing explosion on a high-speed camera capable of 10,000 frames per second, allowing it to be viewed 400 times slower than real time.

They found that after 300µs in the water, metal dendrites protrude out from the drop and pierce the vapour layer around it. These spikes give the alloy a much greater surface area and allow for it to quickly react with the surrounding water. The reason for this rapid expansion is all to do with charge, Jungwirth says.

Using molecular dynamics simulations, the team showed the alloy becomes incredibly unstable as a result of this excess positive charge. The charges repel each other and lead to a ‘coulomb explosion’, producing the spikes the researchers witnessed during their imaging experiments. The team claim this expansion is the trigger for the alkali metals’ violent behaviour in water.

‘It’s an interesting paper,’ comments Neil Bourne, director of the National Centre for Matter under Extreme Conditions in the UK. ‘It opens up questions for the field.’ But he adds that the research may have benefitted from more refined high speed imaging methods: ‘There are lots of new and exciting techniques they could have used, which would make their conclusions more robust.’ He also questions whether the work ‘directly relates to any industrial [processes]’.

Jungwirth contends, however, that the research community was not necessarily their main target when carrying out this work. ‘I would be most happy if high school teachers get the message,’ he says. ‘I think the biggest thing would be if next time this experiment is performed in high schools, it’s connected with the proper explanation. We’ll do our best to spread the message.’