Alzheimer’s antibody gets surprise US approval

Good news for industry and future drug approvals, but physicians doubt it will be effective for most patients

The US Food & Drug Administration (FDA) surprised the Alzheimer’s disease community by approving Biogen’s aducanumab (now called Aduhelm). The FDA noted that this monoclonal antibody is the first to show a reduction in amyloid plaques in the brains of Alzheimer’s patients. Previous drugs have slowed the progression of these aberrant protein clumps, a hallmark of Alzheimer’s, but not reduced them. 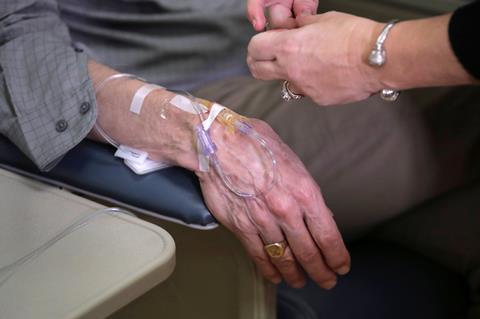 Aducanumab has been approved on the basis of clearing amyloid plaques in patients’ brains, rather than any clinical effect on cognitive ability

The administration granted ‘accelerated approval’, which is intended to provide earlier access to potentially valuable therapies in severe diseases where there is an unmet need, and ‘where there is an expectation of clinical benefit despite some residual uncertainty,’ noted Patrizia Cavazzoni, director of the FDA’s Center for Drug Evaluation and Research.

This uncertainty owes partly to the two phase 3 clinical trials for the drug being stopped in 2019, when an interim analysis pointed to no clinical benefit. Later, when more data were crunched, a patient group in one of the trials showed improvement. This revisiting of the data and post-hoc analysis failed to impress an independent advisory panel late last year. Indeed, at least three members of that panel have resigned in protest over the approval decision.

I expected them to ask for more data, or have some sort of conditional approval

The FDA noted that amyloid plaques were reduced in all trials, and concluded that this is reasonably likely to result in clinical benefit. But only one trial showed clinical benefits. Reactions from Alzheimer’s researchers have varied widely. ‘I expected them to ask for more data, or have some sort of conditional approval,’ says John Hardy from University College London, UK.

‘They had one positive trial and one absolutely inconclusive trial,’ adds Hardy. ‘It was approved on reaching its secondary endpoints [amyloid reduction], which is really rather unusual.’ He predicts that if clearance of amyloid plaques is used as a surrogate for Alzheimer’s drugs, in the way reducing cholesterol is a marker for heart drugs, there will be considerable pushback from many researchers.

Some comments Hardy has seen amongst colleagues were along the lines of ‘I didn’t think amyloid in the brain was the disease. I thought dementia was the disease.’ Opinions are divided, however. ‘Frankly, surrogate is a strange thing to call [amyloid plaque], because it is the cause of the patient’s memory failure,’ says neurologist Dennis Selkoe at Brigham and Women’s Hospital and Harvard Medical School in Boston, US, who welcomes the FDA decision.

Neuroscientist Thomas Wisniewski at New York University, US, says he was supportive of approval, though surprised at the decision. He welcomes amyloid reduction as a surrogate marker, ‘because it enhances the possibility that other agents will also be approved.’ He acknowledges scepticism about whether targeting plaques themselves is a viable therapeutic approach in those with symptoms, however.

Wisniewski immediately notified his patients that, while a milestone achievement, Aduhelm is not a cure for Alzheimer’s and there remains uncertainty about clinical benefit. Its approval was not limited to early disease and it remains to be seen how patients will be selected for treatment, which requires intravenous infusion every four weeks.

Aduhelm targets the early phase of Alzheimer’s disease. But scans to detect early amyloid plaques typically cost $5000 in the US, and most US health insurers will not cover them, says Wisniewski. ‘Finding mild patients is difficult,’ agrees Hardy, ‘and telling patients that they’re too late in the disease for this drug to work is also difficult.’ He notes that the UK alone has half a million Alzheimer’s patients. The drug is probably not going to be effective for them, and could bankrupt the country, he adds. If UK regulators follow suit with approval, the National Institute for Health and Care Excellence would also perform a cost-benefit calculation before it would be offered to patients.

Patient groups such as the Alzheimer’s Association campaigned for approval and welcomed the FDA decision. Patient pressure will now be immense. Wisniewski says he has already had ‘a gazillion calls and messages,’ such is the pent-up demand for a treatment. But the disease will have progressed too far in many patients. The FDA should have approved for patients only with mild or very mild cognitive impairment, says Selkoe. ‘According to the label, anyone with Alzheimer’s disease could be getting this [drug],’ he adds. ‘And that makes it more challenging for us practitioners.’

He is not alone in this view. ‘I’m surprised that the approval seems to be so wide,’ says Hardy. ‘One might hope that the reason the FDA is so positive, is because they have data we have not seen from people who continued to receive the drug.’ Selkoe believes that the ‘FDA may have been influenced by the three other antibody agents that are in clinical trials right now [from Eisai, Eli Lilly and Roche], some of which have published positive results.’

Finding mild patients is difficult, and telling patients that they’re too late in the disease for this drug to work is also difficult

‘As a healthcare professional, I’m concerned about the consequences of this approval,’ says neuroscientist Rudolph Tanzi at Harvard University, because removing amyloid from the brain will not improve cognition. ‘As a scientist, I’m elated.’ This is because the FDA has now opened the door for clinical trials of drugs to remove amyloid that will be safer and cheaper, and therefore could allow treatment of individuals years before they show any symptoms of the disease, he explains.

‘We’ve been fretting over how do we get amyloid drugs into trials, if the FDA wants them to improve cognition, and they’re not going to do that,’ says Tanzi. He believes Aduhelm will work best for those who can afford scans before they have any symptoms, and then can afford the drug as a preventive medicine, removing amyloid before it triggers neuroinflammation and brain cell death.

Biogen noted that the safety profile of Aduhelm is ‘well characterised’ in over 3000 patients who received at least one dose. However, Wisniewski says that frequent monitoring scans will be required to ensure that there are no serious complications from the drug, such as ‘amyloid related imaging abnormalities,’ which could signal brain swelling or bleeding.

Cavazzoni at the FDA wrote that the agency will continue to monitor Aduhelm as it reaches patients and require a post-approval clinical trial. Selkoe expects placebo controlled trial in countries where Aduhelm is not approved. This could result in the drug’s removal from the market, if it does not prove effective. The drug is under consideration by regulatory agencies in Japan, Europe and Brazil.