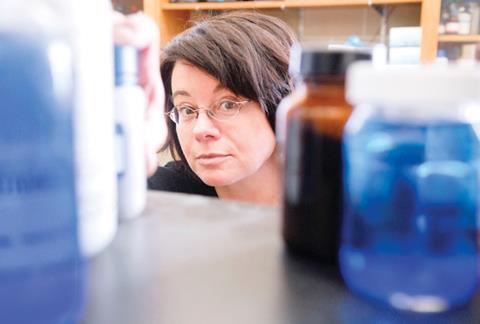 Linda Nazar was drawn to both literature and science in high school, but she decided to pursue the latter because it seemed more interesting and versatile. Now a professor of inorganic chemistry, nanotechnology and materials chemistry at the University of Waterloo in Ontario, Canada, she was named by Thomson Reuters one of the most highly cited researchers in the world and one of the most influential scientific minds of 2014.

Nazar joined Waterloo in the late 1980s as an inorganic materials chemist and the last 20 years of her research has focused on energy storage, specifically how to move beyond lithium-ion batteries to less expensive, higher density energy storage. This sought after next-generation technology must be scalable for the grid market, uninterrupted power supplies and vehicles.

‘Those all require different energy storage systems, so that requires a lot of understanding of different chemistry at many different levels,’ explains Nazar, who was named to the Order of Canada in July 2015, for her contributions to materials electrochemistry.

Typically, lithium–sulfur cells have a lithium metal anode and a carbon–sulfur cathode immersed in an electrolyte and separated by a membrane. During discharge, lithium ions move from the anode to the cathode where they react to form lithium polysulfides.

Earlier this year, Nazar and her colleagues discovered that using a manganese dioxide nanosheet as a host for the sulfur cathode dramatically boosted the device’s performance. They estimated that weight-for-weight the low-cost lithium–sulfur battery could take an electric car twice as far as current lithium-ion technology.

However, Nazar says the positive results probably don’t have much to do with the nanosheet itself. Although manganese dioxide is important because it is a plentiful mineral and inexpensive, Nazar suggests that the mechanism of how the nanosheet works is the more important aspect of her research. Nazar’s team proposes that reactions occur on the nanosheet that anchor soluble polysufides to the cathode. The loss of these polysulfides is one of the major stumbling blocks for lithium–sulfur batteries, and means the amount of energy batteries can hold quickly tails off.

Nazar’s new battery withstood 2000 charge–discharge cycles with little loss of capacity. She says this effect appears to extend to graphene oxide as well, and graphene oxide has been observed to work quite well as a cathode host for lithium–sulfur batteries.

‘We are fairly confident that this is an important contribution in terms of understanding how things work,’ Nazar states. ‘It is up to us and the rest of the community to see just how widely applicable this is, and to use it in an even better sense to improve the stability performance of the cells.’

She says her work is just one milestone along the way to achieving a lithium–sulfur cell that can cycle as effectively as some of the current lithium-ion batteries. ‘This is certainly one major step in trying to solve some of the problems of the positive electrode,’ Nazar states, but she notes that significant issues remain to be tackled. These include improving cathode architecture, and developing better binders to address the expansion–contraction effect that occurs when going from sulfur to the end product.

When she started as an undergraduate at the University of British Columbia (UBC) in late 1970s, Nazar was most interested in physics. Her father, who had earned a Bachelor’s degree in science but ended up owning his own jewellery-making business, was very supportive of Nazar going into science. It was also her excellent first year chemistry professor, Robert Thompson at UBC, that inspired Nazar to enter chemistry rather physics, and to abandon plans to become a medical doctor.

‘I got into medical school, but I declined it because at that point I wanted to finish my degree, and definitely just wanted to be a chemist,’ she recalls. Nazar went on to earn a PhD in chemistry from the University of Toronto, and later became interested in electrochemistry and inorganic chemistry. ‘The field that I am in is a good blend of those two,’ she notes.

Nazar is an obvious role model for women wanting to enter science. She admits there isn’t yet gender parity in her field of electrochemical energy storage, but hopes that this will be achieved in the future as young women will naturally choose to seek careers in this area and excel.

A deliberate focus on putting women in leadership roles in academic science is important, but would be best if it happens organically, she suggests, as then the best people will enter the arena. ‘It should be a level playing field – if you’re good you’re good, and if you’re not you’re not,’ she says.