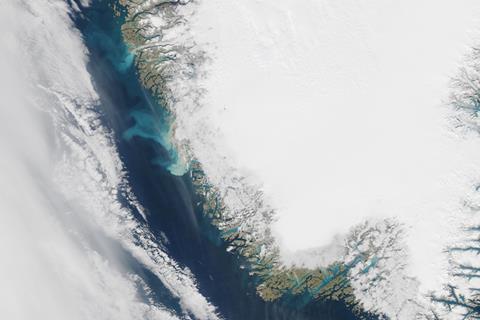 Every summer, a huge microalgae bloom covers 200,000 square miles of the Labrador Sea, just off the coast of Greenland, turning the waters turquoise. Despite extensive documentation, the full reason for the bloom was unknown until now.

The primary driver of the majority of algal blooms in high latitude regions is the large difference in temperature between the seasons. As the temperature drops in winter, convection currents move warm, nutrient-rich water from the seabed to the surface of the ocean. These nutrient rich waters linger into summer when the algae take advantage of abundant sunlight to form blooms. However, this does not fully account for the annual bloom in the Labrador Sea. If the rapid growth of the algae only relied on sunlight and the nutrients from the seafloor, the bloom would start in early spring as days became longer.

In order to determine the unknown factor triggering the annual bloom, Kevin Arrigo, a biological oceanographer at Stanford University, and his team analysed Nasa satellite imagery of the Labrador Sea alongside computer models which simulated ocean currents and glacier melts in and around Greenland. Using this data, they found a significant correlation between the timing of the bloom and glacial meltwater entering the sea. As the oceans around Greenland are known to be some of the more iron-limited regions of the Earth, and the photosynthetic machinery of the microalgae requires this element, the team hypothesise that the bloom is triggered by an influx of iron particles washed from Greenland’s rocks.

Arrigo and his team now intend to test this hypothesis by sampling the water both before and after the annual summer bloom.