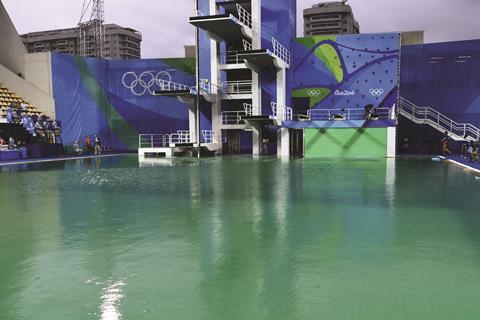 When the water in the diving pool at the Rio 2016 Olympic Games went green – and another pool later followed suit – organisers were left with red faces. Initial suggestions that algae were to blame have now been vindicated after much chemical and biological confusion.

The blooming of these green marine microbes was due to the inadvertent addition of a large quantity of hydrogen peroxide to the pools, which essentially inactivated the ‘chlorine’ and allowed the ubiquitous algae to grow unimpeded turning the water green and cloudy in the Rio winter heat and humidity. Hypochlorite, which is used to kill microorganisms, reacts with hydrogen peroxide, breaking it down.

‘I can quite imagine, with a maintenance team that may not have had much experience running the semi-automated dosing system in a new pool, that it would be only too easy to open the “wrong” valve,’ says Richard Gymer, a scientist at the University of Cambridge, UK, who has been a volunteer pool technician at an open-air pool. ‘Hydrogen peroxide is occasionally used as an alternative for pools where people might be sensitive to ‘chlorine’, or where pools are run at higher-than-normal temperatures. However, to be effective, it has to be combined with UV light in the recirculation system – it’s the strong UV light that kills bugs and algae, and the peroxide that removes the dead cells, sweat and debris.’

He adds that ‘it is also possible to combine UV with chlorination methods; this enables one to run pools at lower than usual levels of chorine, but it means that it doesn’t take much to wipe out the chlorine levels – pools need to be kept an eye on. Whatever the level of disinfectant, it’s easy to get caught out by a rainstorm!’

Within a day or so of the pool taking on its unwelcoming hue – as well as a tell-tale whiff of hydrogen sulfide – Rio Olympics spokesperson Mario Andrada announced that algae were to blame. However, within hours the officials had changed their story and were claiming a drop in alkalinity was behind the colour change. It all seemed to be something of a conspiracy within a cover up as other explanations ranged from damaged copper piping, divers’ moisturising fake tan and urine-revealing additives.

Large bodies of freshwater, including swimming and diving pools, exposed to sunlight and the outdoor air are very difficult to keep clean and sterile. Their pH, temperature and levels of hypochlorite – the ‘chlorine’ – as well as other additives must be held within a small range of tolerances. If they are not, pathogenic microbes can multiply posing a health risk to those entering the water. Moreover, cloudiness caused by algae and other marine life makes being a lifeguard riskier in the event of an accident.

As Chemistry World reported last week, it is possible to ‘overshock’ a pool with chlorine and disrupt this delicate balance allowing algae to bloom. However, in this case it was the inadvertent addition of other additives that caused the unwanted colour change. The maintenance team is now draining and refilling the pools to return their normal blue hue.

‘Although chemicals can be used to adjust disinfectant levels and deal with problems, after a while there can be too much dissolved solids, and the only response can be to throw away some water and refill,’ Gymer says. ‘It’s surprising how long it takes to empty and refill an Olympic pool.’