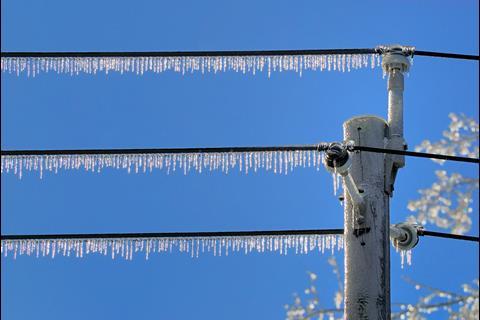 The researchers hope to apply their technology to powerlines, the surface of solar cells and windmills 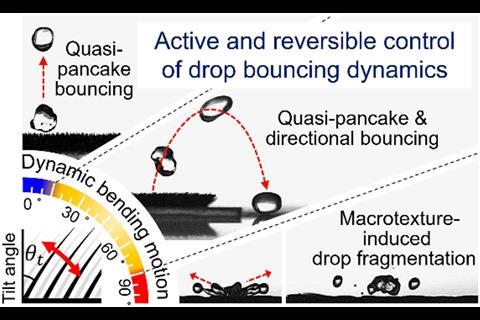 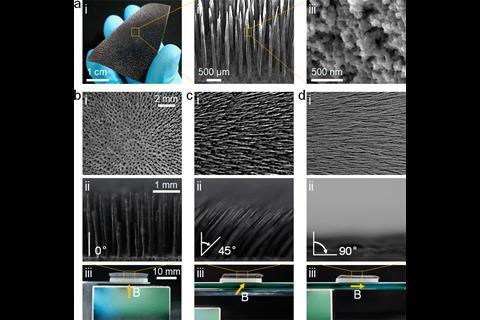 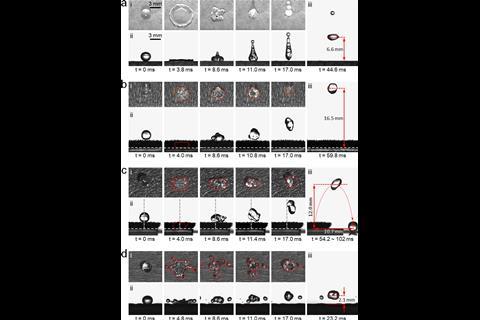 Dynamic bouncing of water droplets off surfaces using a magnetically responsive hair array could serve as an effective material for limiting ice formation.

Researchers from South Korea have used an array of tapered hairs coated in carbon nanoparticles to repel water in different ways, effectively preventing the droplets from turning into ice crystals at the surface. It’s yielded better results than other anti-icing materials and could find numerous practical uses, according to lead researcher Hoon Eui Jeong from the Ulsan National Institute of Science and Technology.

‘Currently our main target is to apply the technology to energy facilities such as powerlines, the surface of solar cells and windmills,’ he says, although other structures particularly affected by ice, such as roads and buildings, could also be treated. ‘For anti-icing surfaces, the traditional approach is to use Joule heating or chemical release but this requires energy or can cause surface damage and corrosion [respectively].’ Even promising contenders such as superhydrophobic surfaces haven’t been able to completely dispel water from their surfaces.

However, by using a magnetically responsive hair array and bending it with a magnet, Jeong’s team observed three distinct modes of droplet bouncing behaviour that reduced the contact time of droplets on the array at an improved rate to superhydrophobic surfaces. This is a critical factor as contact time directly relates to how well the array prevents ice formation.

When the researchers placed the magnet directly above the array, the droplet accelerated upwards upon contact with the upright hairs and bounced off, as recorded by a high-speed camera. The team dubbed this ‘quasi-pancake’ bouncing because perfect pancake-shaped droplets weren’t observed.

Tilting the array by 45° caused the droplets to ‘directionally rebound’, while a 90° angle created a macroscale texture from the overlapping hairs, causing droplets to fragment upon impact. Despite the horizontal angle in macrotexture-induced droplet fragmentation – a factor that usually hampers the effectiveness of superhydrophobic surfaces – droplets didn’t remain on the surface long enough to freeze due to the array’s rough surface and tapered hairs.

All three types of droplet bouncing typically decreased the contact time of water with the array by several seconds, ‘clearly demonstrating that these materials definitely perform better than conventional superhydrophobic surfaces coatings’, says Sushant Anand from the University of Illinois at Chicago, US, who researches anti-icing technologies.

‘But each approach [to increasing the robustness of superhydrophobic surfaces] comes with pros and cons,’ Anand warns. ‘These materials are very good at room temperature conditions but at higher temperatures, and with condensation and frost, they may not work well.’

Jeong hopes to demonstrate the practical applications of the array in future work by tweaking its geometry, as well as achieve perfect pancake bouncing of the droplets