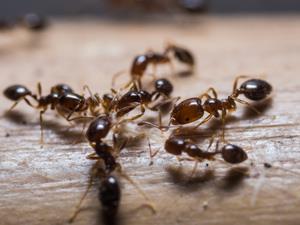 The first naturally occurring ionic liquid has been discovered by researchers in the US, formed by warring ants who mix their own venom with that from a rival species.

Ionic liquids – salts with a low melting point – are widely used as solvents and catalysts across many industries, but until now they had never been found in nature.

A team led by James Davis at the University of South Alabama, US, were looking at two ant species that fight over territory. When sprayed with alkaloid-based venom by fire ants (Solenopsis Invicta), tawny crazy ants (Nylanderia fulva) detoxify themselves by grooming with their own venom, formic acid. The team mixed the two venoms in vitro to show that they make a viscous ionic liquid containing a mixture of different cations along with formate anions. They say it is likely that other ionic liquids are waiting to be found elsewhere in nature.