Using molecular design, researchers have developed a synthetic water oxidation catalyst with an enzyme-like cavity to speed up the reaction. This unusual catalytic system achieves the challenging oxidative water-splitting reaction at a comparable rate to the photosystems found in photosynthesis.

Water oxidation is a key step in photosynthesis and involves splitting two water molecules into molecular oxygen and protons using solar energy. While this process is crucial in nature to sustain life, the ability to cheaply reproduce this reaction could help meet humanity’s energy needs by creating a steady stream of oxygen and hydrogen. Synthetic mimics of the natural oxygen evolving complex are known, but generally suffer from low catalytic activity or short lifetimes. ‘It is very hard to oxidise water,’ explains Stefan Bernhard, a renewable energy chemist at Carnegie Mellon University, US. ‘The process requires the transfer of four electrons and so needs a lot of electrochemical or photochemical energy. One of the particularly tricky aspects is ensuring that the catalyst isn’t just “burnt up” by these demanding conditions.’

Ruthenium metal centres have shown promise as water oxidation catalysts, but their performance is strongly dependent on the mechanistic pathway of the oxygen–oxygen bond-forming reaction. Altering pH can promote preorganisation of water molecules around the metal centre, favouring the water nucleophilic attack mechanism and resulting in enhanced catalytic performance. However, this has been rarely used in catalyst design. 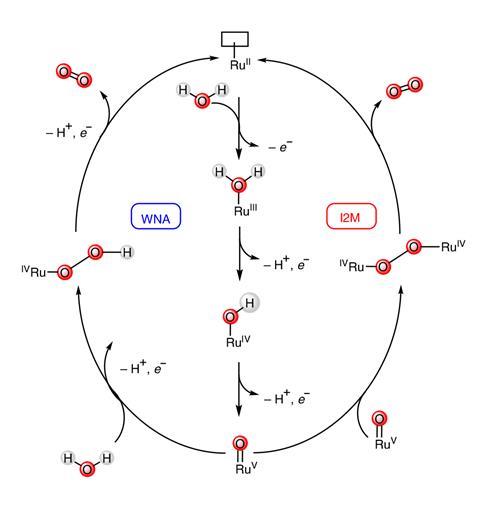 Researchers in Germany have now developed a pH-sensitive macrocyclic ruthenium system, able to form an enzyme-like cavity around the metal centre under acidic conditions. ‘Traditional transition metal catalyst design has focused on the directly bound ligands to tune electronic properties and the structural environment,’ says Frank Würthner, an organic chemist at Julius-Maximilians-University of Würzburg, Germany. ‘Here we have embedded the ruthenium catalyst in a macrocycle to make use of the functional groups positioned on the opposite side of the pocket.’

Extensive mechanistic analysis revealed that the macrocycle acts like a pH-controlled door, closing to form a small molecular cleft under acidic conditions. At low pH, the basic groups on the backbone of the macrocycle become protonated, resulting in the slight rotation of the axial ligands. This creates an enclosed enzyme-like cavity in which hydrogen bonds preorganise molecules of water in front of the reactive ruthenium centre, enabling rapid oxidation.

‘140 catalyst turnovers per second is pretty fast,’ comments Bernhard. ‘But how many times will the catalyst actually turnover? The elegant – but vulnerable – proton transfer-orchestrating section of the catalyst could greatly impact the robustness of the system. This is an important economic consideration for viable catalysts in any solar fuel generating system. The more turnovers, the cheaper your fuel will become.’

The team ultimately want to develop this catalyst into a self-sufficient molecular system that does not rely on sacrificial oxidising reagents to support the catalytic cycle. However, Würthner also believes that this catalyst design strategy has wider implications for researchers in all areas of catalysis. ‘I really hope that our work will be helpful to anyone working in homogeneous catalysis. I think there is a large unexplored area in making use of the opposing environment for controlling catalytic reactions.’