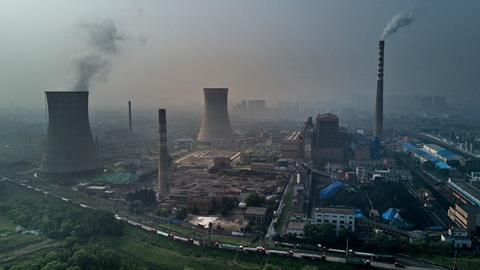 China’s National Energy Administration (NEA) has been publicly rebuked for failing to stop construction of new coal power plants and not doing enough to promote low carbon energy. The criticisms, described by observers as unusually harsh, come in a report from a central government inspection team that was set up in 2015 by the country’s president Xi Jinping.

‘As big as it gets in China’s energy policy,’ tweeted Lauri Myllyvirta, lead analyst at the Helsinki-based Centre for Research on Energy and Clean Air (CREA). ‘Definitely the juiciest and most insightful bureaucratic doc I’ve seen in years,’ wrote Li Shuo, senior climate and energy policy officer for Greenpeace East Asia. Given that the NEA is ’a key agency in our bureaucracy, setting the overall policy direction for the coal industry, it is just very hard to imagine that there won’t be a very significant course adjustment’, Li tells Chemistry World.

The report accuses the NEA of a ‘creative interpretation’ of air pollution regulations, misguided coal power planning leading directly to the construction of coal projects that should never have been built, prioritising energy security at the expense of environmental protection, and using economic and industrial burden as an excuse for selective enforcement of environmental standards.

‘They need to basically put a red light on any additional future coal-fired power projects,’ Li says. ‘That by itself, will send a very strong political signal, both domestically, but also internationally, as it will be in line with the latest climate ambition.’

Many of these coal plants have been built to serve industry’s needs rather than to supply the grid – so-called ‘captive’ plants. Global Energy Monitor has tracked these operations and found that, where the technology is known, about 70% of the plants use the least efficient ‘subcritical’ technology meaning they produce more carbon dioxide. They are also subject to less stringent air pollution controls. This is compared to China’s coal fleet as a whole, where subcritical technology makes up 45% of coal power. Myllyvirta says he expects a clampdown on coal power projects in the east, with project cancellations and better enforcement of air pollution standards.

Monthly quotas set by central government result in electricity from coal-fired plants being brought into the grid before any electricity from renewables, because local authorities want to protect mining jobs. Moreover, the inspectors found just 1% of the electricity carried by long distance transmission lines meant to bring power from the west to the heavily polluted east, is from non-fossil sources.

Zhang Jianyu, vice president of the Environmental Defence Fund’s China programme expects the findings of the inspection report will bring about ‘major changes’ in the implementation of renewable energy legislation, and boost clean energy development. Analysts agree a complete reform of the electricity system is needed, especially if China is to surpass its latest target of 25% clean electricity generation by 2030. That, says Li, is a ‘political conversation’ that has been stalled for over a decade.

The country’s first national emissions trading system (ETS) began operating last week – although only in the power sector, which accounts for almost 40% of the country’s emissions from energy consumption. Over 2000 power generators are taking part. Rather than an absolute cap on emissions (as in the EU system) China has opted to cap carbon intensity – emissions per unit of GDP. Its impact on emissions is expected to be limited in the short term. Analysts at UBS estimate that the allocation of free carbon credits implies companies that don’t reduce emissions by 4–6% would have to buy credits. Zhang suggests gains will be ‘far reaching and more significant in other sectors yet to be included’. Their changing demands, combined with less finance available for coal, will, he expects, help cut emissions in the power sector itself.

It’s not clear which industries will join the ETS next, but key emitters – iron, steel, cement, power and chemicals – have been mandated to develop their emissions reduction plans in line with President Xi’s commitment that carbon emissions will peak by 2030. Already China’s largest steelmaker, the Baowu group, has said its emissions will peak in 2023. Many observers, including the World Resources Institute, think China’s emissions could peak as early as 2025.

Next month China’s leaders will present the country’s 14th five-year plan, which is expected to indicate just how ambitious it is prepared to be. According to Li, preliminary data suggest that even in spite of the time lost during the height of the pandemic, iron, steel and cement production is likely to have been higher in 2020 than it was in 2019. The question, he says, ‘is whether there is enough political determination from the top to enforce the latest vision and how much buy-in they will be able to secure from the local level, from the different industries and sectors’.