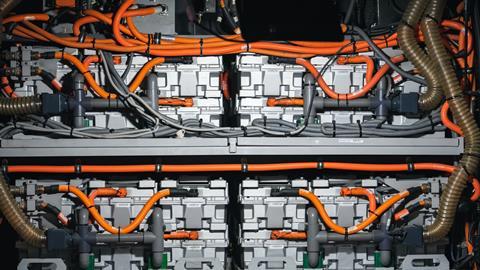 The fast-evolving market for vehicle batteries is driving commoditisation and consolidation, but also innovation

Batteries are being described as the new oil, so perhaps it’s no surprise that in recent years there have been more innovations in batteries than in almost any other technology (as measured by patents). Aside from R&D, billions are being invested in expanding production across the globe and in partnerships all along the supply chain, from raw materials to battery cells.

Prices of lithium-ion batteries – the mainstay of the electric vehicle (EV) market – have tumbled by almost 90% over the past decade. However, raw materials prices (especially for lithium) rose sharply last year. According to BloombergNEF, that threatens to push back the point at which electric cars will compete on cost with internal combustion vehicles, perhaps as far as 2026 in some markets. It also puts pressure on vehicle makers, who must meet new fleet emissions standards on the road to net zero. 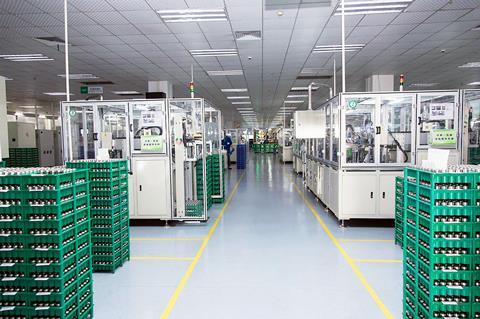 Modern battery plants can be relatively easily modified to produce batteries using a variety of different materials, in response to changing customer demands

European and US manufacturers are heavily reliant on east Asia for raw materials, precursors and cathode materials, says Max Reid, a research analyst on battery materials with Wood Mackenzie. ‘It’s such a low-margin industry at the moment, our high-cost industry is struggling to compete.’ That was thrown into stark relief last November, when Johnson Matthey announced it was pulling out of its cathode materials business, because its costs were too high to deliver anticipated profits and to attract a major business partner. Cathode choice is particular important because it usually makes up more than 50% of the materials costs of a battery, according to Dustin Bauer, a patent assistant at Reddie & Grose. ‘There’s so much pressure to reduce costs throughout the supply chain, you see all the major raw material producers and miners integrating with each other, with the midstream [precursor and cathode makers] and all the way up into the end users,’ says Reid.

Tesla has tied up a deal for nickel supply from a US mine that won’t start producing until 2026; it’s also trying to diversify lithium sourcing – even going as far as to secure its own US mining rights. Germany’s BASF is partnering with the world’s largest battery maker CATL, providing cathode materials for the Chinese firm’s first European manufacturing plant. It’s also announced partnerships with car maker Porsche to provide materials for its battery manufacturing joint venture, as well with China’s SVolt to develop cathode materials and to advance recycling technology. A BASF spokesperson says the company has been focusing on high efficiency metals extraction, including lithium, which is otherwise destroyed in recycling. NorthVolt, a new Swedish battery maker that produced its first cell at the end of 2021, intends to be completely vertically integrated from in-house cathode production to recycling. In partnership with Volkswagen, it’s building a German battery plant expected to start production in 2024; while a tie-in with Volvo will support a plant in Sweden, capable of supplying 50GWh of battery capacity per year – enough for around 500,000 cars.

‘Europe is alive with Gigafactories at the moment – and plans for Gigafactories,’ observes Ruth Sayers, director of technology and operations at Sheffield, UK-based Faradion. ‘When you do the maths – manufacturing in the location (even if things like your labour costs are more expensive) the fact that you’re not having to ship parts and components globally – it makes sense to be near your customer base, and environmentally it’s the right thing to do.’

It’s such a low-margin industry at the moment, our high-cost industry is struggling to compete

Choice of materials is driven essentially by consumer demand, says Reid. ‘Do you want a 500-mile range EV or do you want a £30,000 EV? Or do you want a quick accelerating EV? So in some sense, it’s consumer driven. It’s actually relatively easy to retrofit a factory to produce one chemistry or the other. Certainly in China, battery makers will produce a mixture. So you have this sort of continuous flow of deciding what chemistry you want to produce based on how the market is looking at the time.’ 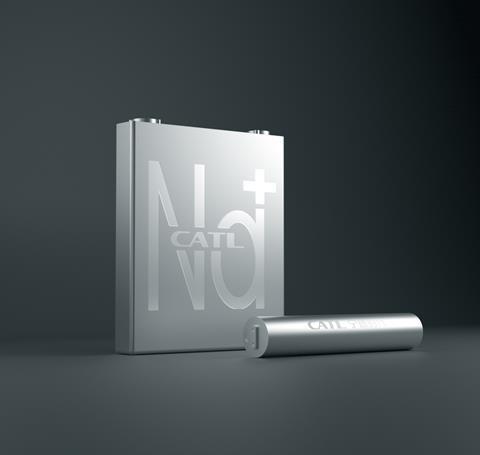 CATL’s first generation of sodium-ion batteries have an energy density of up to 160Wh/kg. This is comparable to LFP-based lithium-ion, but other chemistries can reach up to 265Wh/kg. The firm is targeting over 200Wh/kg for the next iteration, and Faradion has a similar roadmap. A CATL spokesperson told Chemistry World that it is applying technology developed for anode-free lithium metal batteries ‘which helps to significantly increase the energy density’. Such cells are manufactured and transported without anodes. Sodium is then deposited on the current collector when the battery is first charged, and that becomes the anode.

‘Sodium-ion batteries are made using exactly the same processes and on exactly the same manufacturing equipment as you make lithium-ion batteries. So the infrastructure already exists and there’s no requirement for additional capital expenditure,’ says Sayers. ‘The announcement that Tesla will use LFP has really opened up battery chemistry to sodium. It’s essentially an LFP replacement technology – so where LFP goes, sodium-ion can go too.’

Sodium batteries are much cheaper – potentially shaving up to 40% off the costs of materials. They don’t contain lithium, whose extraction from either rock or brine consumes hundreds of litres of water for every tonne produced; nor do they contain cobalt, which has been linked to human rights abuses and environmental destruction in the Democratic Republic of Congo. Copper is eliminated too: instead, aluminium is used for current collectors on both electrodes.

Faradion’s first applications are in the three-wheeler market. Its technology will be used in India by new owner Reliance New Energy Solar at its planned Gigafactory in the west of the country. Faradion is also talking to truck and bus manufacturers.

Sodium-ion is essentially an LFP replacement technology – so where LFP goes, sodium-ion can go too

While the availability of charging points might deal with most drivers’ range anxiety, solid state battery technology potentially offers greater energy density – which means longer range. CATL has made samples of solid-state batteries, but suggests ‘there’s long way to go’ until they’re mass produced. Not least because ‘there are multiple technological problems to be solved’.

With solid state, ‘you’ve got to go through this complex deposition process, which at the moment is at pilot plant scale,’ says Reid. Another issue is the supply of high-purity lithium metal, to replace the graphite anode used in lithium-ion batteries. This relies on lithium chloride as a precursor. ‘At the moment, there’s not a huge amount of infrastructure. If there is that demand then we have to scale that up massively, and solid-state batteries might be a very expensive alternative [even if] you can charge your electric vehicle in five minutes,’ he suggests. However, research groups are exploring sodium as a cheaper alternative.

Several gigafactories, such as that being built by Britishvolt, are under construction across Europe

Taiwan-based ProLogium claims to have developed a solid-state lithium ceramic battery that can charge in 12 minutes and provide twice the range of its conventional lithium-ion counterparts. German car-maker Mercedes Benz has just invested, and the two companies anticipate solid state batteries will be used in Mercedes Benz cars in the second half of the decade.

Batteries may be the new oil, but can the same environmental destruction be avoided? Recovering the significant quantities of key materials will cut batteries’ carbon footprint. Recycling capacity in China is ramping up quickly – but the fledgling industries in Europe and the US have an opportunity to design in recycling from the start.

In the UK, several efforts are underway to build recycling systems. Johnson Matthey has teamed up with European Metal Recycling to develop a fully closed loop process for lithium-ion batteries and cell manufacturing materials, while Faradion intends to cover the full battery lifecycle as it starts to scale. ‘The process for recycling sodium is exactly the same as the process you would use for lithium-ion. In some respects it’s more straightforward because you don’t have to separate out the elements in the same way and you only have aluminium as opposed to having aluminium and copper,’ says Sayers. She adds that Faradion is also working on a ‘green cell’ where elements will be compostable.

In early February, another newcomer – Britishvolt – entered a joint venture with mining and recycling group Glencore, initially to process the lithium-ion scrap material from its gigafactory, expected to begin volume production in early 2024.

As well as recycling, it wants to slash the embedded carbon in the battery cells it produces. Chief technical officer Allan Patterson told a Knowledge Transfer Network battery technology summit it aims to emit no more than 25kg of carbon dioxide per kWh of production. The benchmark in the US and Europe is about 60kg/kWh; while in China (heavily reliant on coal power) it’s around 90kg/kWh of production. ‘The big steps are to localise the cathode material manufacture, do that with renewable energy, and potentially do that for the graphite system as well.’ Britishvolt also wants to ‘push the performance of the cell. So if you can push up the energy density, that’s important. But it also comes back to [the] main active materials and how they are being made, and then how they’re being recycled.’