Bees face a barrage of chemical and environmental burdens

Wild and domesticated bees are under pressure from pesticides, diseases and habitat degradation, but it remains challenging to quantify their impacts and understand how they act together.

‘We’re measuring habitat loss, emerging pathogens, competition and new agricultural pesticides individually, but we are much less good at really understanding how they interact with each other,’ says Mark Brown, parasitologist and bee biologist at Royal Holloway University of London, UK. Open questions include whether a landscape with meagre flower resources renders bees more susceptible to parasites or to pesticides, and whether specific combinations of stresses harm bees more than others. 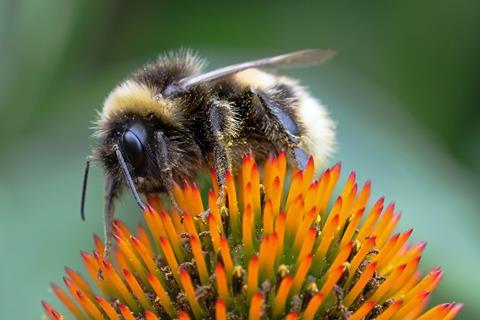 Most field studies have concentrated on honeybees, whereas the effects of stresses on bumblebees and solitary bees are less well understood

Brown and his colleagues combed through 15,000 relevant studies and selected experiments that looked at more than one stressor. They pooled data from 90 lab studies in their meta-analysis, from the last two decades, where bees were exposed to combinations of agrochemicals, nutritional stress and/or parasites.1 They looked at effects on mortality, foraging behaviour, memory, mortality and colony reproduction. They found an overall synergistic effect between multiple stressors on bee mortality, and concluded that we are underestimating the negative repercussions for bees of the multiple stresses they face.

When the researchers re-ran the analysis with only field-relevant concentrations, they uncovered strong evidence for synergies with agrochemicals on bee mortality, but not for parasites and/or nutritional deficits. ‘It was interesting to see that agrochemicals were the only interactions to come out as purely synergistic,’ says Harry Siviter, team member and bee biologist at the University of Texas at Austin, US. ‘This appears to be occurring at field realistic levels.’ Synergistic means that the combined effect of two stresses is greater than that expected from simply adding them together.

One proviso, however, was a dearth of nutritional experiments. That’s surprising, says Brown, ‘given that poor nutrition is one of the major things we see in the field, such as flower-poor landscapes.’ Such experiments are tougher to do, in comparison to comparing the effects of pesticides on bees, and require an understanding of bees’ nutritional requirements, and what different flowers can provide them, say the researchers.

‘This is a very thorough and comprehensive analysis,’ comments Christian Maus, pollinator safety manager at Bayer, about the new study. But he says most of the synergies involved a combination of two classes of chemicals ‘well known to have the potential to interact synergistically,’ such as azole fungicides and pyrethroid insecticides. This does not warrant the conclusion that synergies between pesticides are common, he says.

Meanwhile, some bee biologists say that regulators are missing the real-world impact of agrochemical combinations on pollinators such as wild bumblebees. ‘We know that a field is going to be sprayed with fungicides, herbicides and possibly multiple insecticides. Our study shows that it is the interaction of those things that is worrying,’ says Brown. Measuring the effect of each chemical alone, which the regulatory process does, can mistakenly show them to be harmless for bees, he adds.

‘We need a system where we are accounting for the fact that you get unpredictable results when you put chemicals together. We don’t do that, and so we are underestimating the dangers that we pose to wildlife,’ says Brown. He recently compared herbicide brands with the active ingredient glyphosate, and reported high mortality caused by Bayer’s Roundup, but not some other brands.2 The study concluded that surfactants and other ingredients may kill bees by blocking gas exchange, and it called for pesticide companies to release the full list of ingredients for each pesticide formulation.

Bayer’s Maus says that in the EU every active ingredient is evaluated, but also every formulated product must be tested and subject to a risk assessment. He says Bayer also tests for harmful synergies in products that farmers commonly combine in a spray tank. But Siviter would like regulators to do more post-market surveillance, akin to the monitoring that happens once a human drug comes to market. ‘Once a chemical is licensed, it can be used until this license expires,’ he says. ‘We don’t monitor its environmental impact.’

Maus disagrees. There is already some monitoring in place, he says, such as by the Julius Kühn Institute in Germany and a wildlife incident investigations group in the UK, to which beekeepers report suspected intoxications by pesticides and submit samples to a lab. ‘Especially in the UK the number of [honeybee] incidences is pretty low,’ says Maus. 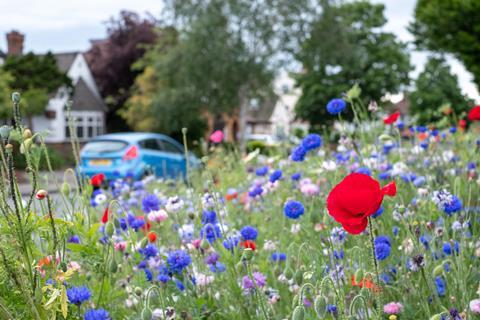 Stopping cosmetic chemical use in domestic gardens and urban areas could eliminate pressure from pesticides, while at the same time improving biodiversity of food sources for bees and other pollinators

Another issue, say the study scientists, is that honeybees have almost always been used for such studies. This domesticated insect is an oddity in the bee world, living in hives with thousands of individuals, often managed by beekeepers. ‘There is increasing awareness that we need to include other bees within the regulatory process,’ says Siviter, such as bumblebees (whose nests typically consist of a few dozen individuals) and solitary bees.

Maus says Bayer goes beyond what is required by the regulators and, for example, is contributing to new testing systems, including for bumblebees. ‘Colleagues in our research department have investigated how bees are detoxifying certain pesticides, and can identify substances that could potentially be detoxified by enzymes in bees, making them more bee friendly,’ he adds.

Bee researcher Dave Goulson at the University of Sussex, UK, says that pairwise synergies, such as fungicides reducing the detox capabilities of bees exposed to pyrethroid pesticides, have been recognised for some time, but that this new meta-analysis suggests that ‘the non-additive effects between pesticides are much more widespread than perhaps anyone had realised.’

Goulson has recently published a book – Silent Earth: Averting the Insect Apocalypse – celebrating insects and looking at reasons for their decline, and what we can do to conserve them. He organised a petition to ban urban and garden pesticides in the UK to protect bees, other wildlife and human health. The petition has over 38,000 signatures, and the government has issued a formal response. If it reaches 100,000 signatures, it will be considered for debate in the UK parliament.

‘Every supermarket these days has a bewildering array of poisons for people to just buy and spray willy-nilly around their gardens,’ says Goulson. ‘When you think about how health and safety conscious we are, in most respects, it seems completely insane.’ He adds that there is not even an age restriction on purchasing such potentially dangerous products in the UK. Other countries and cities have banned the use of specific agrochemicals, such as glyphosate – particularly for domestic and cosmetic purposes, such as lawn treatments.

Some pesticides are probably necessary to grow foods on a commercial scale, but in a garden, there’s no evidence that we need them

Goulson recounts how each summer his garden runner beans become smothered in black bean aphids, which he admits looks awful. This year, within a fortnight, the aphids were gone, ‘eaten by ladybirds, hoverflies, blue tits and so on,’ he says. He argues that not using insecticides encourages such natural predators in the garden, so that pest problems can resolve naturally. 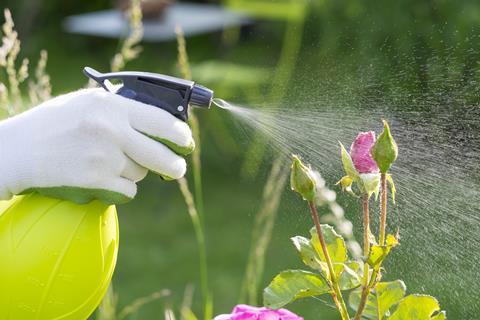 While entomologists favour eliminating domestic chemical use, manufacturers play down the significance of these relatively small-scale measures

‘In our current form of agriculture, which relies on large fields and intensive farming of a single crop, we are setting up a system perfect for herbivores,’ says Brown, so in this context, agrochemicals are needed for crop protection. However, he sees no reason why pesticides or herbicides should be used in gardens or parks. ‘You can make a pretty compelling argument that some pesticides are probably necessary, or at least helpful, to grow foods on a commercial scale,’ Goulson agrees, ‘but in a garden setting, there’s no evidence that we need them.’ He is also concerned that people may not pay enough attention to pesticide labelling, with information on potential harms and application rates. Maus at Bayer counters that he is ‘not aware of any intoxication cases that were caused by home and garden products’. The dimensions are so small, he adds, that it is very unlikely that they can cause major damage. ‘I don’t see that much will change in the incidence of bee harmed by pesticides by restricting their use,’ he notes.

But Goulson hopes that in future pesticides will be used less for protection, and in a more targeted way. ‘It is quite common that when people have analysed honey samples from hives, they find 20 different pesticides,’ he says. ‘In the real world, bees and other beneficial insects are exposed to really complicated mixtures.’ He continues: ‘We shouldn’t be looking for a single cause of insect declines. It is this barrage of pressures that we’re throwing at them, including complicated cocktails of pesticides. One simple thing we can do is to at least have our urban areas pesticide free. It would be one less thing for bees to deal with, and there’s no big cost.’

Siviter hope is that his team’s new meta-analysis will encourage changes in agrochemical regulations. ‘If you want to have policy change, you need to quantify and what we’ve been able to do is show with all the data that these interactions are occurring,’ he says.