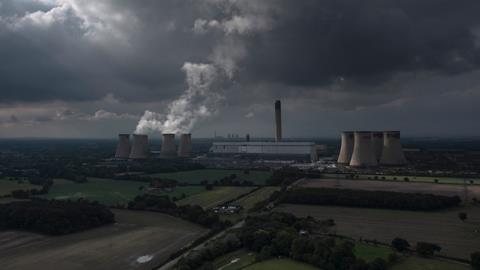 The first detailed analysis of the emissions associated with burning woody biomass imported from the US suggests that in the UK, 13–16 million tonnes of carbon dioxide were added to the atmosphere in 2019. That’s equivalent to the yearly emissions of 6–7 million cars. Emissions from biomass burning are expected to grow to 17–20 million tonnes a year by 2025.

The study, by researchers at Chatham House and the Woodwell Climate Research Centre in the US, examined the entire supply chain taking in the impact on forest carbon stocks, to the energy cost of processing and transporting the wood pellets to the UK, where electricity producer Drax is the biggest importer. Other plants are planned in the UK, while energy from biomass is increasing across the EU.

Existing policy frameworks treat forest biomass as zero carbon when burned because it’s assumed to be part of a natural cycle of forest harvest and growth. Emissions are also meant to be accounted for in the exporting country’s land sector carbon accounts – a UN provision to avoid double counting. In practice, ‘it’s very difficult to know how much biomass is taken out of US forests and used for energy’, says Chatham House author Duncan Brack. This means, he adds, that ‘there is no link between the biomass emissions in the two [land use and energy] sectors ’ .

Drax says the emissions referred to in the Chatham House report are biologically sequestered carbon that is already accounted for in the land use sector. The rules on biomass carbon accounting mean Drax’s reported supply chain carbon dioxide emissions are only 3.1 million tonnes.

Carbon payback periods – how long it takes for carbon to be taken up by new biomass – vary from a few years for sawmill residues, to decades and centuries for whole trees. Definitions of forest residues can vary and whole trees may be removed as part of forest thinning ostensibly to promote the growth of remaining trees. Given the urgency to slash emissions this decade, ‘only the feedstock with the lowest carbon payback periods should be eligible for support’, says Brack. Drax says the biomass it uses ‘meets the highest sustainability standards’.

However, modelling done at the University of Massachusetts Lowell suggests carbon neutrality is not the same as climate neutrality. Researchers showed that while carbon dioxide emitted gets taken back up by forests eventually, the heat content of the climate system doesn’t return to its prior level for centuries. ‘Even though every single molecule of CO2 has been sequestered, it is not the same as not emitting the CO2 in the first place,’ says study author Juliette Rooney-Varga, a professor of environmental science at Lowell.

Drax is now piloting the capture of its carbon dioxide emissions to enable it to claim overall negative emissions. The company plans to invest £2 billion to deploy bioenergy with carbon capture and storage (Beccs) initially at two units. It expects the cost of storing one tonne of carbon dioxide and generating 1MWh of electricity will be around £150. A recent report from the Coalition for Negative Emissions estimates CO2 compression, transportation and storage would cost £10–25/tonne of CO2. Drax says its estimate sits in the middle of that range, and the cost is expected to come down as deployment increases.

The government’s Net Zero Strategy envisages at least 5 million tonnes of engineered removals, including Beccs and direct air capture, by 2030, to compensate for emissions from hard to abate sectors. It acknowledges the need to ensure ‘[greenhouse gas removals (GGR)] result in a permanent net reduction in atmospheric carbon. This is a complex task which, at least in the near-term, may require case-by-case scrutiny of the carbon intensity of GGR supply chains and long-term indirect emissions of GGR projects.’