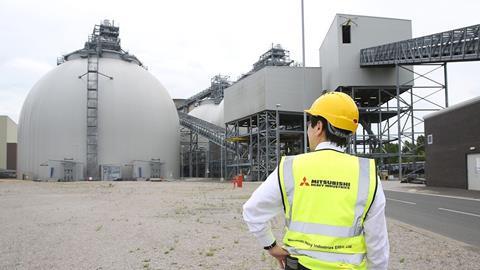 Drax has taken another step in its ambition to deploy bioenergy with carbon capture and storage (Beccs) by licensing technology from Mitsubishi Heavy Industries (MHI).

Last year it began testing two amine-based solvents developed by the Japanese company and has chosen one of these for what would be the UK’s largest negative emissions project, at its biomass plant in north Yorkshire. MHI’s post-combustion capture technology is in use at 13 commercial plants around the world. Many of these use the captured carbon dioxide for urea production and handle a variety of flue gases.

The carbon-capturing solvent is expected to bring economic benefits including reduced running costs. It is less volatile and more stable than its predecessor, which Drax also tested. 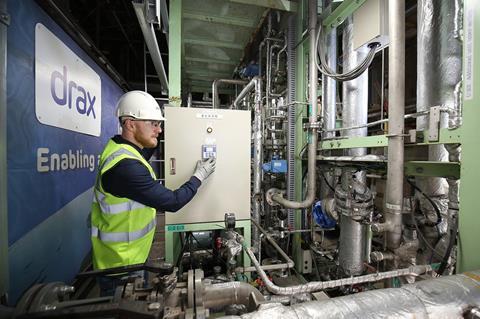 Drax is tight-lipped about the energy costs of carbon capture and solvent regeneration but says the new solvent has been designed for optimal energy use, which at the Drax plant will be ‘nearly half of older technologies’.

Drax chief executive Will Gardiner said the ‘game changing contract’ could ‘contribute to a decade of global environmental leadership from the UK and provide further stimulus to a post-Covid economic recovery’. MHI says it will develop a centre of excellence for carbon capture and storage in London, and potentially produce its proprietary solvent in the UK as a means of strengthening its supply chain.

Drax has also been running a pilot with C-Capture – a spin out from the University of Leeds – in what was its first demonstration outside the lab. Its solvent technology aimed to get energy costs down to less than 2GJ/tonne of carbon dioxide. The two companies say they continue to work together to progress C-Capture’s process. 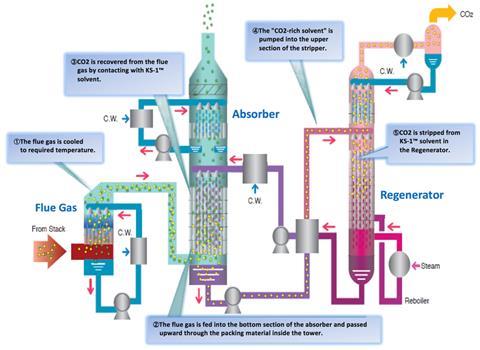 The carbon capture process at the pilot plant

Drax burns wood pellets made from low grade wood, and sawmill and forest residues sourced from ‘sustainably managed working forests’, which it says are growing faster than biomass is being removed. The emissions are counted as zero because the forests continue to take up carbon dioxide as they grow and the waste and residues would otherwise have been burnt or degraded.

Capturing and storing the carbon dioxide emitted at Drax will permanently remove it from the atmosphere. Negative emissions technologies like Beccs are seen as increasingly important in delivering net zero, although environmental groups argue biomass can produce more emissions than burning coal, as well as damaging biodiversity.

Drax says that with an ‘effective negative emissions policy and investment framework’ from the government the first Beccs unit could be in operation by 2027. Two units would capture 50% of emissions from biomass power generation – some 8 million tonnes a year, by 2030.

The plant would also become a customer for the transport and storage system being designed by the Northern Endurance Partnership, that will store carbon dioxide in a saline aquifer under the North Sea. Earlier this year, Drax and its partners in the industrial cluster on the Humber secured £21 million of government funding towards a £75m project to begin decarbonisation of the region.