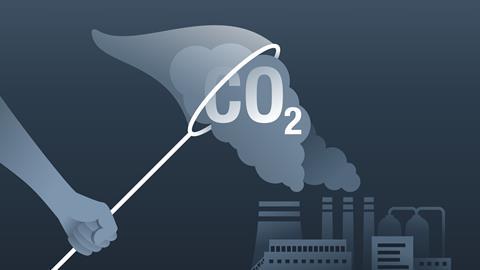 The world risks missing its target to limit average global warming to 1.5°C without significantly ramping up negative emissions technologies by 2025.

The call to action comes in a study by a newly formed coalition of 20 businesses and organisations, which suggests the current pipeline would deliver 150 megatonnes of carbon removal by 2025, compared with the between 0.5–1.2 gigatonnes a year needed under scenarios published by the Intergovernmental Panel on Climate Change – global carbon dioxide emissions in 2019 were 33 gigatonnes. By 2050, requirements could be as high as 6–10 gigatonnes a year. Given their environmental significance, the technologies are underfunded, the report claims.

The bulk of today’s current carbon removal projects are natural solutions such as planting new forests. Other technologies such as bioenergy with carbon capture and storage (Beccs), being developed in the UK by Drax, and direct air capture and storage (DACS) are still at the pilot stage. The report claims Beccs could sustainably deliver 2–4 gigatonnes of emissions reductions globally, while 4 gigatonnes could be delivered by DACS by 2030, creating millions of jobs in the process. DACS solutions are being pioneered by Canada’s Carbon Engineering and Swiss company, Climeworks. All three companies are members of the Coalition for Negative Emissions, which includes Heathrow Airport, airlines group IAG, Bank of America and the Confederation of British Industry. The group argues that industry and governments must now work together to scale-up technologies. ‘Critical to unlocking this industry is ensuring an effective mechanism for accounting for and trading these emissions,’ says Paul Davies, group development director at recycling and renewable energy firm Viridor, also a member of the coalition.

Modelling cited in the report suggests that at scale the cost of DACS using liquid solvent technology could fall to between £75–125/tonne of carbon dioxide captured by 2050 – less than half the cost today. The cost of solid sorbent technologies employed by current DACS technologies could shrink to £80–175/tonne by 2050 compared to upwards of £450/tonne today. However, DACS technology is extremely energy hungry and would require a massive expansion in renewable energy – capturing between 40–80 megatonnes of carbon dioxide would require between 80–240 million MWh of additional energy at 2000–3000kWh/tonne of carbon dioxide. The UK’s carbon dioxide emissions in 2020 were 326 megatonnes.

The report does stress that such technologies are not alternatives to cutting emissions, as countries have pledged to do under the 2015 Paris agreement, but will be required to eliminate residual emissions that could persist in industries such as aviation.

Ajay Gambhir, who works on low carbon transition pathways at the Grantham Institute for Climate Change and the Environment, argues that ‘there’s a bit of nuance’. He doesn’t doubt that there’s likely to be a very big role for synthetic emissions removals, but not achieving ‘large scale emissions removals by the end of this decade, doesn’t mean it’s all over. It’s more likely to be all over if we don’t drastically reduce our emissions during this decade.’

‘What the 2020s really need to be about is proving these technologies can work at scale, ready to be rapidly scaled up in the 2030s,’ he adds.

The UK government has a £70 million programme to fund nascent carbon removal technologies. The first projects to be funded include direct air capture powered by nuclear energy at Sizewell C, enhanced weathering of rock and the extraction of carbon dioxide from seawater, rather than air.