After over three centuries of mystery, the structure of bismuth subgallate has finally been uncovered 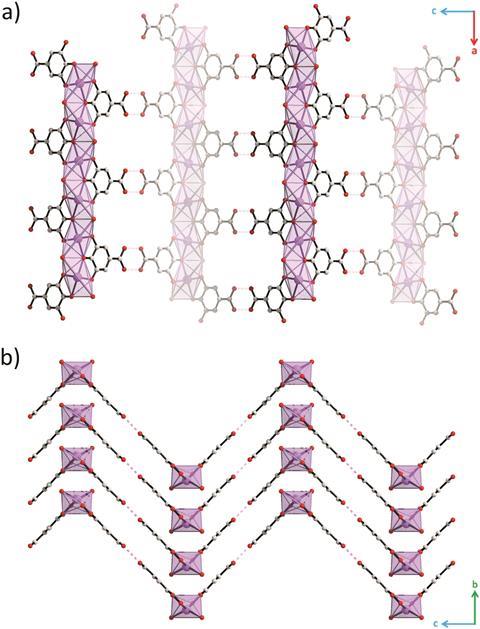 Crystal structure of bismuth subgallate viewed along (a) [010] and (b) [100]. Bismuth, carbon and oxygen atoms are coloured purple, grey and red, respectively. Hydrogen atoms and water molecules in the pores have been omitted for clarity.

Bismuth subgallate – a widely used pharmaceutical for treating stomach ulcers – is a porous coordination polymer, new research shows. The discovery, made by scientists in Sweden and the UK, settles a long running question over the drug’s structure, which had been frustrated by bismuth subgallate’s tiny crystals and their tendency to break down when exposed to high energy electron beams.

Now, Andrew Kentaro Inge from Stockholm University and his team have overcome these issues. By combining continuous rotational data collection with a cooling technique, they avoided the electron beam damage, poor resolution and diffuse scattering holding them and others back. ‘Continuous rotation electron diffraction is a promising way to elucidate the structures of hard to obtain, or very hard to crystallise, pharmaceutical forms. For this purpose, it’s an up-and-coming method,’ says Tomislav Friŝĉić, an expert in materials chemistry at McGill University in Canada.

Prior to this discovery, a lack of structural evidence had wrongly characterised bismuth subgallate as a molecular compound. ‘If you look up the structure of bismuth subgallate on the internet, you get a chemical depiction of the material that has been proved to be completely wrong by this work,’ comments Russell Morris, an expert in framework solids at the University of St Andrews, UK.

The correct structure – a porous coordination complex – is not unexpected. ‘When you look at the organic molecule that’s used to make this compound, there are a number of oxygen atoms that can coordinate to metals,’ explains Inge. ‘In that sense, it’s logical that we ended up with a porous structure.’ This discovery comes at a remarkably serendipitous time. ‘It is surprising that something that has been used in medicine for over 100 years is this porous structure because porous structures have only been of research interest for the past 25 years or so,’ he adds.

This research could help solve the structures of other previously unknown compounds. ‘I would love to see what they could do with bismuth subsalicylate or other metallo-organic drugs using this technique,’ adds Friŝĉić. ‘The question here is really what’s next – there are so many of these bismuth or antimony based classical metallo-drugs, and it would be really amazing if this technique were to be used to solve these century old problems.’