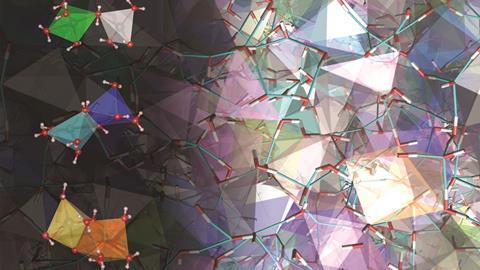 Using neural networks, researchers in Germany have determined that sodium hydroxide has a remarkably complex range of structures in solution.

Sodium hydroxide is one of the most commonly used chemical reagents; yet until now researchers have not fully explored the structural properties of its aqueous solutions. NaOH can be found in any laboratory and concentrated solutions of this strong base are frequently used in chemical industry for example in paper production. As such, there is significant interest in determining its fundamental properties.

Jörg Behler and Matti Hellström at Ruhr University Bochum, have now discovered that there’s more to this deceptively simple and common reagent. The compound shows a broad distribution of possible three-dimensional arrangements of its ions and the surrounding water molecules (called coordination polyhedra) that vary with concentration. The arrangement of these polyhedra with respect to each other is equally complex. 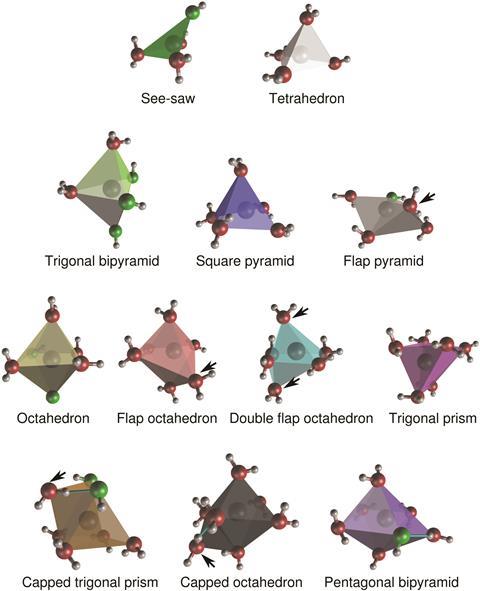 ’Our research shows there is a significant breadth of possible solvation structures. Thus, when thinking about solvation, even of simple ions like Na+, it’s important to consider all the different possible structures, as opposed to just the average,’ says Hellström.

They discovered a total of 12 distinct coordination polyhedra. In a fully saturated solution, there are only two water molecules per formula unit NaOH. At these high concentrations, each coordination polyhedron prefers to share ligands with different types of polyhedra leading to complex structural patterns. Until now such research has been hindered by this extraordinary complexity as predicting these structures through traditional methods can be very computationally intensive.

Behler and Hellström used a method based on artificial neural networks. ‘We ended up using [this method] because it is both very accurate and less computationally demanding than quantum-chemical “first-principles” methods,’ reflects Hellström.

Artificial neural networks mimic the way the brain works. Rather than programming the entire simulation from scratch, Behler and Hellström feed the program training examples based on neutron and x-ray diffraction data. The neural network takes these examples and uses them to learn how to solve the problem by itself. ‘This is a remarkably thorough and complete application of the impressive methodology,’ says Paul Popelier, an expert in chemical theory and computation at the University of Manchester, UK. ’It offers a computationally attractive and more feasible alternative to ab initio molecular dynamics to obtain insight in the microstructure of solutes, independently of experiment.’

Behler and Hellström now intend to investigate how solvation plays a role when these ions come into contact with surfaces such as electrodes.