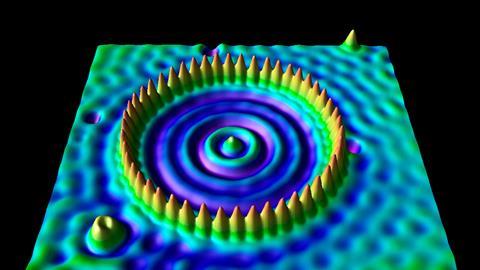 Bond between artificial and natural atom measured for the first time

Scientists in Germany have found that quantum corrals – synthetic circular nanostructures that act as artificial atoms – can form very weak chemical bonds with an atom sitting at the tip of an atomic force microscope (AFM). ‘For the first time, we could experimentally verify the chemical bonds formed by such artificial atoms,’ says Franz Giessibl from the University of Regensburg, who led the study.

Like natural atoms, artificial atoms have a fixed number of electrons with discrete electronic states. Quantum corrals – in the form of a circle made of 48 iron atoms placed on a copper surface – were first introduced by a US team in 1993,2 providing fascinating insights into quantum mechanics and opening new opportunities in materials science. ‘One of the appealing features of such artificial atoms is that they provide control over properties that cannot be controlled in real atoms,’ says Ingmar Swart from Utrecht University in the Netherlands, who wasn’t involved in the study. ‘They can also be coupled together into lattices, which can be used to create and study materials with potentially exciting and useful properties that do not exist in nature.’

The researchers used the tip of a scanning probe microscope to build two artificial atoms of different sizes: a classic 48-atom quantum corral as well as a smaller version containing only 24 iron atoms. ‘The quantum corral forms a cage for electrons on the copper surface,’ explains Klaus Richter, one of the theoreticians in the team. ‘The ring of natural atoms provides a mechanism for trapping electrons, forming an artificial atom—it’s like the attractive Coulomb forces between atomic nuclei and electrons in natural atoms!’

The microscope used in the experiments was equipped with a qPlus sensor that is based on quartz-watch technology and can measure very tiny forces.3 The scientists probed the interaction between the corrals’ electrons and the AFM tip’s front atom , and found a bond with an energy of around 5meV for the larger system. A similar bonding force was also detected for the smaller corral. ‘Covalent bonds of natural atoms correspond to bonding energies of a few electron volts,’ Giessibl says. 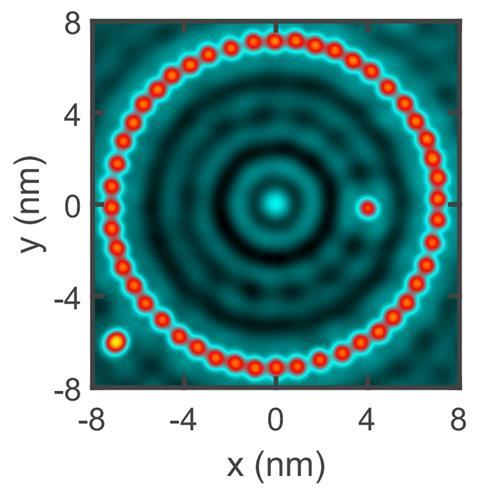 ‘Natural covalent bonds are built between atomic orbitals of the same microscopic size,’ explains Richter. ‘In our case, a natural atom forms a bond with an object – the artificial atom – that is about 100 times larger. Microscopic and mesoscopic length scales meet.’

Swart says that this is an amazing accomplishment. ‘The force between the quantum corral and the AFM tip was found to be on the order of one thousandth of the typical value used in atomically resolved AFM studies, making these experiments a real tour-de-force. This work is pushing the limits of what’s currently technically possible in terms of measuring small forces.’

‘The authors could measure very weak interactions within a certain distance range, demonstrating attraction for a metal-terminated tip and repulsion for a CO-terminated tip,’ comments Willi Auwärter of the Technical University of Munich in Germany. ’This work gives unprecedented insight into the bonding properties of a nanoscale artificial atom that is “big and electronically dilute” compared to natural atoms.’

Giessibl points out that although the interactions are weak, they still alter the occupation of quantum mechanical states in the artificial atoms. ‘Our colleagues from theory helped us understand the patterns that were created when adding perturbations into the quantum corral,’ he says. Thanks to the 2D nature of the systems, the team could deliberately make changes to the structures to study certain properties. ‘We put an obstacle inside the atom and watched what happens —a feat that isn’t possible for natural atoms,’ says Giessibl.

He believes that the results could be useful in different areas. ‘This first measurement of the chemical bonding of artificial atoms visualises the character of elusive quantum mechanics. Applications in quantum information, materials science and chemistry appear if just a little imagination and thinking are applied.’