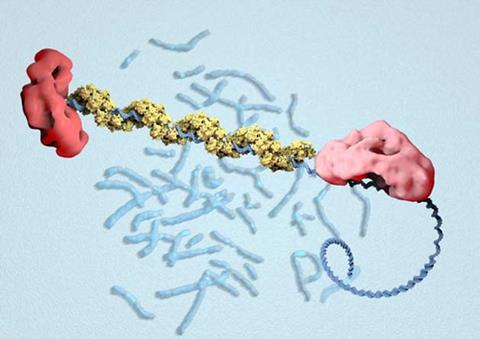 The first detailed images of BRCA2 – a protein involved in DNA repair that if damaged can raise the probability that a woman will develop breast cancer – have revealed its structure and the mechanism by which it works, offering hope for new treatments.

The genes that code for BRCA2 and the related protein BRCA1 have been linked to breast cancer, as well as other cancers including ovarian and prostate. Mutations in the BRCA2 gene increase women’s lifetime risk of breast cancer from 12% to between 40% and 85%, but because the structure and function of the protein is so poorly understood, few drugs are directed at it.

A team led by Xiaodong Zhang from Imperial College London, UK, used electron microscopy to show how BRCA2 works with another protein, RAD51, to repair broken strands of DNA. Assisted by BRCA2, RAD51 latches onto broken bits of DNA to form filaments, and then searches for complementary sequences to repair the strand. The images revealed that BRCA2 exists as a dimer, which can form a complex with two units of RAD51 with opposite orientations and enable them to bind DNA strands on either side.

These observations, the researchers say, will make it easier to design drugs to correct errors in the repair process or fix broken structures that result from mutations.