What might leaving the EU mean for medicines regulation, the Unified Patent Court, and the UK’s participation in Reach?

The aftershocks of the UK’s decision to leave the EU are continuing to surface. As the new cabinet ministers settle into their departments, companies and organisations are trying to work out the possible effects on the UK’s position in terms of regulation and trade in pharmaceuticals and chemicals. 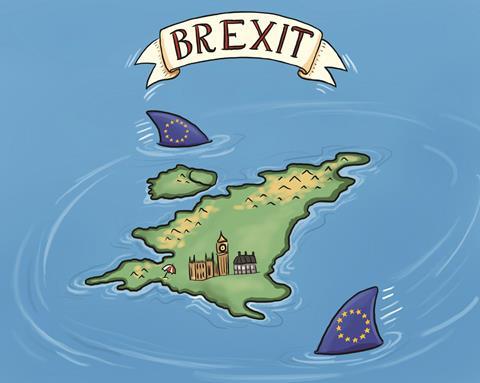 Chemical and pharmaceutical regulation are heavily integrated into Europe - what will it take to disentagle them?

It seems likely the European Medicines Agency (EMA) will eventually move out of London, even as its 600-strong staff settles into new offices in Canary Wharf. In a terse note, the EMA said its operations depend on the future UK–EU relationship and ‘we will not engage in any speculations.’ Most experts, however, predict a move away from the UK.

As the main regulatory body for EU drug registration, the EMA attracts non-EU companies to London. It can grant companies a single market authorisation and faster access to the EU market, and is the first port of call for innovative medicines such as gene therapies and monoclonal antibodies. Its absence, according to a recent Economist Intelligence Unit report, would make the UK less attractive for healthcare suppliers.

The EMA also takes an advisory role, coaching smaller companies in preparing their documentation. ‘Some international companies established their base in London to access the European market, because of the presence of the European Medicines Agency,’ says Annie Pannelay, health policy analyst at the Economist Intelligence Unit. Japanese pharma company Shionogi chose the UK for this reason.

There is also a benefit to the UK’s Medical and Healthcare products Regulatory Agency (MHRA) being close to the EMA. ‘It is perceived to be one of the most efficient at implementing new guidelines and has a seat at the table with EMA. This relationship would be weakened,’ says Karen Taylor, health analyst at Deloitte, though the UK agency retains strong expertise. There is an optimistic scenario whereby the UK could benefit from going it alone, introducing a faster authorisation procedure that allows for early access to innovative medicines.

Venture capitalist Sander van Deventer at Forbion Capital Partners disagrees, though. ‘We would have to spend money on two different procedures and regulatory filings are extremely costly,’ he says. ‘And for expensive medicines, the UK is not so attractive in terms of price, so I really don’t see an advantage.’ If the UK stayed inside the European Economic Area (EEA), it could adhere to the EMA’s regulatory regime, but would need to adopt everything the EMA approves while having no input. ‘It is a lose-lose situation,’ says van Deventer: rules but no influence.

There are also several possible scenarios for what will happen to the European Unified Patent Court, scheduled for launch next year. ‘Which one happens depends on political will,’ predicts Darren Smyth, patent attorney at EIP.

Intellectual property will be such a small part of the Brexit negotiations, there is concern that nobody is going to care enough about it

Under a 2012 agreement, there will be a unitary patent, which converts a granted European patent into one patent across 25 states, supported by a Unified Patent Court. However, France, Germany and the UK must ratify the agreement. Technically the UK is (or was) ready to ratify. ‘Most of us think this is inconceivable soon after the referendum result and the new prime minister, Theresa May, saying “Brexit means Brexit”,’ says Smyth. As long as the UK remains an EU member but does not ratify the agreement, the court cannot come into existence. The negotiations once the leaving process is triggered could also leave the decisions in limbo for several years.

The UK is a respected location for patent litigation. ‘The Unified Patent Court will be much more valuable for both users and the legal profession if the UK is part of it,’ says Koen Bijvank, patent attorney at VO in the Netherlands. ‘The UK courts are well respected: not the cheapest, but generally give good judgements, so a lot of patent litigation takes place in the UK.’ This is especially true in life sciences – one reason why the division of the new court specialising in pharmaceuticals and chemicals patents was destined for London.

Helen Cline, legal director at Pinsent Masons, argues that without the UK, the entire system may not be attractive to industry and she issues a call to arms: ‘There is an opportunity here for the pharmaceutical and chemical industry to lobby and create political will for the UK to remain part of the UPC.’ However, although almost everyone involved in intellectual property likes the idea of a unified patent litigation system, industry is somewhat cautious. This is because the newly established court will be something of an unknown and entails risks.

‘For me to interact with the US patent office and then all these different filings in Europe, it’s a big difference. It makes sense to unify,’ says van Deventer. Litigation against a patent infringement would involve a local division of the UPC, whose decision then applies across the 25 states. However, patent validity can be challenged at a central location. ‘In that one single procedure you could lose your patent in all those countries, so you are putting all your eggs in one basket,’ says Bijvank.

It’s been a long road. This is the fourth serious attempt at introducing a Europe-wide patent court since the 1960s, says Smyth, who fears for its future. ‘Intellectual property will be such a small part of the Brexit negotiations,’ he frets. ‘There is concern that nobody is going to care enough about it.’ If it falters, ‘nothing is likely to be achieved in our lifetime,’ Smyth believes. He calls on the IP community to come together and present a solution to policymakers.

Some argue it is possible to negotiate a change in the rules so the UK can stay in the unified patent regime, yet outside the EU. Legal opinion strongly differs on this point.

Reach and other regulations

Chemicals regulations in the UK are heavily based on EU law. While the decision to leave doesn’t precipitate immediate change, whether this situation continues depends on any Brexit deal. Industry leans towards retaining access to the EEA, but this Norway-type model comes at a price. ‘Essentially the UK would continue to abide by EU standards and requirements, for example the landmark legislation Reach [Registration, evaluation, authorisation and restriction of chemicals],’ explains Veerle Heyvaert from the London School of Economics, UK.

If you are an attractive export market, you can impose your own standards on other countries with different standards. It’s the Brussels effect

The UK might also lose its input into making EU chemical laws and may no longer have a seat at the management board of the European Chemicals Agency, which advises the European commission on matters such as which chemicals should be subject to restrictions. ‘It plays a key role in making decisions and it is rare for the commission to go against what the ECHA says,’ Heyvaert notes.

Another option would be for the UK to be outside the EEA, but with a number of bilateral agreements, including one for chemicals. However, it seems likely that the EU would insist on UK manufacturers meeting EU standards as a precondition to free trade. ‘The EU has the most sophisticated chemical regulatory regime in the world. Whether it would want to be flexible is questionable,’ says Heyvaert.

The third option is not to have any special agreement in place and trade under general World Trade Organization rules. In that case, the UK can choose its own regulatory approach and, conceivably, change those aspects of EU chemicals law that it considers too burdensome. However, once a UK manufacturer wants to export to the EU, it must meet EU standards.

‘If you are an attractive export market, you can impose your own standards on other countries with different standards. It’s the Brussels effect,’ adds Heyvaert. She is not optimistic about the UK going it alone. ‘The chemical sector is heavily Europeanised, and 50% of the chemical trade is intra-EU, so this is one area where the benefits of remaining part of the EU market far, far outstrip the benefit of going it alone.’

Regulatory expertise is also centralised at the EU level, as national authorities assume a supporting and enforcement role. ‘Essentially the UK hasn’t independently regulated its chemicals since the early 1980s. You have to ask if the expertise is really available. And how much would it cost to reinvent the wheel.’