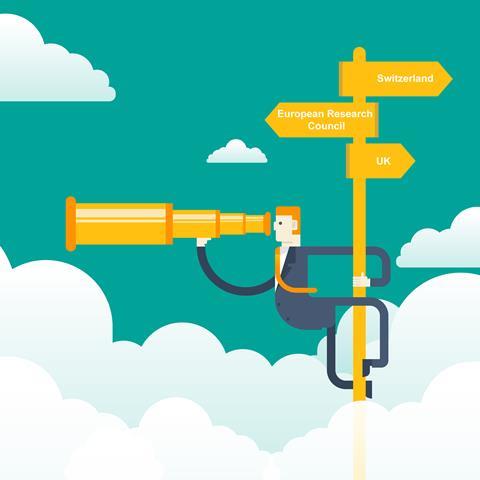 Which way now for European science?

The European Research Council (ERC) faces losing two of its scientific powerhouses thanks to a 2014 Swiss referendum and the UK’s planned exit from the EU. Science leaders across Europe say that their absence would hurt the ERC’s goal of promoting excellence and would dilute the quality of European science, as well UK and Swiss science.

‘It would be a disaster for them and the ERC, as well as for Europe,’ predicts Ernst-Ludwig Winnacker, who was the first secretary general of the ERC when it formed in 2007. ‘Oxford University, Imperial College London and the Swiss Institute of Technology in Zurich and the like, these are the standards for universities on the continent.’

Scientists of any nationality and in any discipline can apply to the ERC to undertake research in any EU member or associate country. Scientific quality – excellence – is the sole yardstick. This year, the council’s budget for grants was increased by €50 million (£43 million) to €1.8 billion for 2017, its first increase since 2013.

Switzerland has punched above its weight when it comes to winning ERC grants, with 452 Swiss-based researchers receiving awards putting it in first place by success rate. However, Swiss participation in the ERC remains in doubt after a 2014 referendum set up barriers to immigration from the EU’s newest member, Croatia.

The UK also performs well hosting the highest number of ERC researchers with British nationals winning over 1447 awards since 2007, alongside another 717 non-UK grantees at its institutions. The country has done well partly because of its good scientific infrastructure and experience in competitive peer review. ‘The UK is among the first country to get the grants,’ says Jean-Pierre Bourguignon, president of the ERC, and ‘the capacity of the British institutions to attract people from all around the word, not only Europe, is extremely significant’.

But the Brexit result in June casts doubt on the UK’s future eligibility. The loss of the UK and Switzerland would ‘be a big blow to European science’, warns Athene Donald, a member of the ERC’s scientific council and soft matter physicist at the University of Cambridge, UK. Strong research groups are a proving ground for researchers from all around the EU, Donald adds. ‘[Brexit] would mean fewer places where ERC grantees can gain experience, fewer potential collaborations, fewer innovative programmes,’ she says. And it would hurt the UK too. ‘Withdrawal from the scheme will hit the recruitment of stars from other countries thereby degrading the science base in the UK,’ says Lee Cronin, Regius chair of chemistry at Glasgow University, UK, who has an ERC advanced grant.

Another concern is that the UK’s exit would dampen competition for ERC funds and reduce overall standards. ‘The ERC without the UK will be like European football without Barcelona and Real Madrid,’ according to emeritus fellow of genetics David McConnell at Trinity College Dublin, Ireland.

UK scientists also influence how science is carried out and assessed in the ERC itself. ‘The funding policy of the ERC, influenced by the UK, was following the highly competitive US model, focusing on originality and imagination, paying no attention to whether research might have any applications, and boosting general academic standards,’ McConnell says.

Swiss scientists may find themselves out in the cold come 9 February 2017, when an interim arrangement for partial Swiss participation in EU science programmes ends. ‘It’s unclear what the situation will be come fall,’ says Jean-Luc Barras at the Swiss National Science Foundation. ‘There is a grey area between the implementation of the referendum result and the free circulation of people agreement.’

‘The Swiss know what they have to do,’ says Bourguignon, though many are resigned to an ERC exit. ‘Switzerland’s ability to access ERC funding looks quite likely to cease soon,’ predicts Donald, though she cautions that it is premature to talk about a UK exit from the ERC. The Swiss experience shows, however, ‘if mobility of workers (researchers) is limited, we will be denied access’, she adds. Politicians need to understand, she adds, that EU funding has made an ‘increasingly large contribution’ to UK universities’ research – one that would be hard to substitute.

Whether the UK leaves the ERC or not will depend on Brexit negotiations, which look extremely unlikely to begin this year. ‘If we don’t have a deal that allows us participate in Horizon 2020, including ERC participation, the UK will lose more than the rest of the world,’ says Anne Glover at the University of Aberdeen, UK, former chief scientific advisor to the president of the European commission.

An independent review of research funded by the European Research Council (ERC) concluded that more than 70% of projects it backs resulted in scientific breakthroughs or major advances.

The ERC was established in 2007 with the goal of providing funding to investigators to pursue groundbreaking, high-risk research in Europe. Independent scientists, selected by the ERC scientific council, performed the qualitative evaluation of the first 199 completed projects.

‘The idea of the ERC from the outset, that the only criteria for funding would be scientific excellence, is really paying off,’ scientific council member Athene Donald said at the recent EuroScience Open Forum in Manchester, UK. ‘Also we are learning that the grantees who get these grants are able to use the funding to consolidate their teams and build up centres of excellence.’