Since the days of Kekulé’s apocryphal dream of ouroboros, the snake eating its own tail, chemists have been fascinated by ring systems. A European collaboration has now found a way to build a cyclic system from that archetypal redox-active unit ferrocene. The system could ultimately find applications in electronic devices and plasmonics, the researchers suggest. 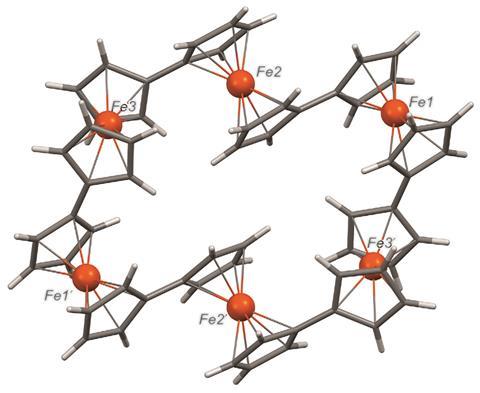 The stable ferrocene rings might find use in electronics

Nicholas Long and Tim Albrecht of Imperial College London, UK, and colleagues at the University of Konstanz in Germany, explain that since its discovery in the 1950s the ferrocene moiety comprising an iron ion sandwiched between two cyclopentadienyl groups has been the focus of much research. The compound is a ubiquitous redox-active group but can be functionalised through classical aromatic reactivity. Moreover, unlike so many useful substances it is remarkably stable to air and heat.

Various ring systems containing ferrocene derivatives have been constructed using dynamic supramolecular assembly, but, the team points out, there are few examples in which the ferrocene monomers are held together in a ring through covalent bonds. Moreover, there are no large cyclic oligomers held together through carbon–carbon bonds between the metallocene units, despite the fact that such a ring system might have potential in molecular recognition, redox systems and a range of applications such as in switching devices.

The team has now devised a one-pot reaction for cyclic ferrocene oligomers through coupling that allows them to join together five, six, seven or nine units in a stable ring. The covalent bonds between the ferrocenes make these systems quite stable and the team has investigated their properties with respect to ring size.

‘[We] are now investigating more efficient synthetic routes to the materials and will continue to examine the electrical and chemical properties of the ring structures,’ Long says. ‘There is interest in how the rings can be derivatised and potentially linked together to form large scale arrays.’

Ian Manners of the University of Bristol, UK, points out that ferrocene macrocycles have generally been limited to species with spacer groups between the metallocene units which tend to decrease metal–metal interactions. He adds that this new series of unique ‘fused’ oligoferrocene macrocycles with five to nine ferrocene units bound by direct cyclopentadienyl–cyclopentadienyl is very interesting. ‘The macrocyle with six ferrocenes is a kind of organometallic analogue of benzene,’ he says. ‘In addition to their fundamental interest, if yields can be improved, the species reported may be useful for host–guest chemistry. Assuming that solubility can be maintained, cyclic polymeric analogues would also be a very interesting target.’