The Nobel prize that got binned

The discoveries that are recognised by the chemistry Nobel prize often exhibit certain features: inspiration, intelligence, rivalry, disputes about credit and no small amount of sheer luck. I would add ‘the ability to recognise something important when you see it’ to that list. There is a long list of journals that rejected the early Crispr papers that led to this year’s award, often with notes that the manuscripts weren’t important enough to even review, or that their discoveries were already known. 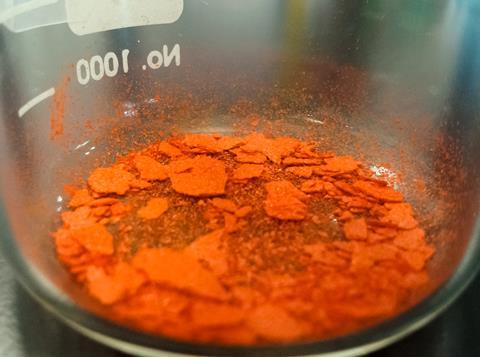 My classic example is ferrocene, the first-of-its-kind organometallic sandwich compound that set off waves of discovery in a whole field. Unbeknown to each other, at least three groups prepared it independently. Only the second (Thomas Kealy and Peter Pauson at Duquesne University, US) and third (Samuel Miller, John Tebboth, and John Tremaine at British Oxygen) published their discoveries of the unexpected and weirdly unreactive yellow-orange product, nearly simultaneously in 1952.

Neither group was quite sure about the structure of the new compound. The Miller paper proposed two cyclopentadienes attached to a central iron atom by single bonds. Pauson ventured the same guess. He was bothered by the compound’s stability, though, and wondered if it might be more ionic, with two negatively charged rings and a +2 iron as an odd sort of salt.

Neither Ernst Fischer in Munich, Germany, nor the team of Robert Woodward and Geoffrey Wilkinson at Harvard University, US, felt comfortable with those proposals. Moreover, they all felt that there was something unusual and important about the orange stuff, because no conventional structure seemed to explain its properties and reactions. Both investigations came to the same conclusion in early 1952: a sandwich of two (now aromatic) coordinated cyclopentadienyl rings with a fully booked-up (and thus unreactive) iron atom in the middle. 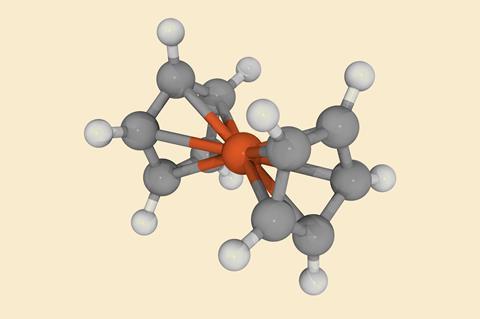 Generations of chemistry students have since grown up with this structure, so it’s hard for us to imagine how bizarre a proposal this was. Famously, the editor of the Journal of the American Chemical Society wrote to Woodward that, although he was accepting the paper, ‘I cannot help feeling that you have been at the hashish again’. But x-ray crystallography quickly confirmed the idea in every detail, and metal-organic chemistry has never looked back. A host of metallocenes followed in an extremely spirited competition between the Fischer and Wilkinson labs, and these led to even more unheard-of coordination complexes, along with new synthetic methods, useful reagents and catalysts and new ideas about chemical bonds themselves.

The Nobel award came in 1973, after more than enough time had passed to show the discsovery’s importance. It went to Fischer and Wilkinson, which led two days later to a letter from Woodward to the chair of the Nobel committee. Woodward wrote, he said, ‘…to let you know, most respectfully, that you have – inadvertently, I am sure – committed a grave injustice’. He spoke of Wilkinson as a junior colleague who was skeptical of Woodward’s solo inspiration, but whom he’d done a favour by including him in the work. Wilkinson, needless to say, disputed this version strongly. And the Nobel committee (as always) did not second-guess or revise their award, a job no doubt made easier by the fact that they had already given a chemistry Nobel to Woodward eight years before.

But now we have to return to the beginning. There were three groups that had prepared ferrocene, and I have not yet mentioned the earliest of them all. That was a team at Union Carbide, who had sent hot cyclopentadiene vapour through an iron pipe apparatus at some point in the late 1940s. They were annoyed to find the equipment had unexpectedly clogged with ‘yellow sludge’. Someone kept a sample and everyone went on to the next experiment. Years later, re-analysis showed that the sludge was (of course) ferrocene. Had anyone had the curiosity to analyse it, and enough imagination to realise what its structure might be, they might well have had a Nobel of their own. Instead, they scrubbed their Nobel prize out with a brush and threw it into the bin. That should make any chemist stop and think about their ‘failed’ experiments, shouldn’t it?