Bronze age tin from Israeli shipwrecks was mined in Britain 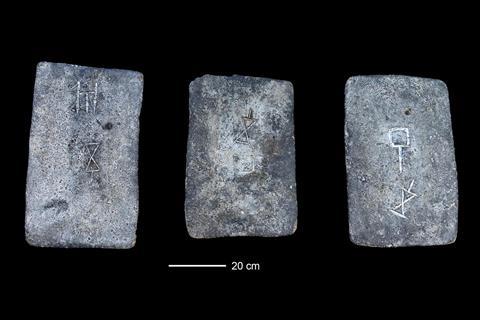 Ingots of tin found in bronze age shipwrecks off the coast of Israel were smelted in the south-west of England, suggesting an ancient trade route existed between the two regions.

The researchers analysed tin and lead isotopes and trace elements in 27 ingots from archaeological sites in Israel, Turkey and the Greek island of Crete, dating from about 3200 years ago. The ancient tin, formed into bars and plates, was probably destined for making bronze – a technology that powerfully influenced the development of ancient cultures. Many of the ingots were recovered from ancient shipwrecks, including a wreck off the Carmel coast, a few miles south of Haifa in Israel, and two wrecks just off of Haifa itself.

The research suggests that the ore for the ingots was mined in Europe, and not in central Asia as previously thought – and that ancient tin ore mines in Devon and Cornwall are their likely source. ‘The lead and the tin isotope composition of the Israeli tin match the isotope systematics of British tin ores,’ explained the lead author of the study, Daniel Berger from the Curt Engelhorn Centre for Archaeometry in Germany. 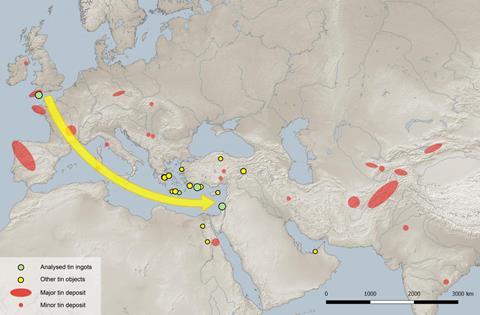 Tin deposits on the Eurasian continent and distribution of tin finds in the area studied dating from 2500–1000BCE. The arrow does not indicate the actual trade route but merely illustrates the assumed origin of the Israeli tin based on the data

The chemical composition of the Israeli ingots also matched tin ingots found in a UK bronze age shipwreck near Salcombe in Devon, which were almost certainly smelted from ores mined nearby, Berger tells Chemistry World. The team found that the tin ore in the ingots formed about 291 million years ago – ruling out sources in Anatolia, central Asia and Egypt, which formed much earlier or later. But the timing matches tin ores found in Europe. Berger adds that the ingots found in Crete and Turkey could have a different provenance to the Israeli ingots, but extensive corrosion made definite conclusions impossible.

Making bronze lifted humanity out of the stone age. There was also a relatively brief copper age before ancient metalworkers learned that adding tin to copper formed bronze, a much harder and stronger metal. Bronze was extensively used in the ancient near east from about 5300 years ago, for weapons, tools, jewellery and objects like pots and cups.

But tin is rarely found in the eastern Mediterranean, and archaeologists have long wondered where the tin needed to make so much bronze came from. The new research suggests a bronze age trading route spanning thousands of miles, linking Europe and the near east.

‘The “tin mystery” has puzzled archaeologists and archaeo-metallurgists for over 40 years,’ says archaeologist Marcos Martinón-Torres from the University of Cambridge, who was not involved in the research. ‘This team has brought us closer to a solution than we’ve ever been.’

But ‘the evidence they bring together is not as conclusive as we had hoped for’, Martinón-Torres says, due to overlaps in the chemical signatures of some tin sources, and the corrosion of some of the samples.

However, the results were consistent with a western European origin for at least some of the ingots. ‘This conclusion is novel and should certainly be tested and investigated further,’ he adds.