Cage structure would be stabilised by hexagons 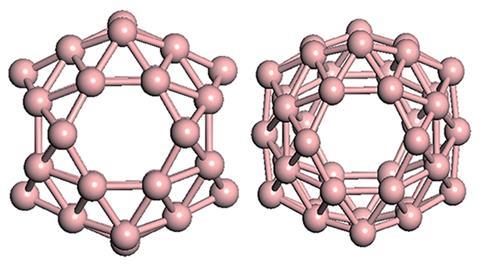 Systematic structure-searching calculations performed by scientists in China have put forward an all-boron analogue of fullerene: B38.

Since C60 fullerene’s discovery in 1985 and the subsequent Nobel prize awarded to Robert Curl, Harry Kroto and Richard Smalley in 1996, researchers have been challenging themselves to make similar structures with other elements in the hope of finding exciting alternative nano building blocks.

The B38 molecule suggested by Yanming Ma and colleagues at Jilin University, Changchun, is a Mackay icosahedron consisting of 56 triangles and four hexagons. It is the first energetically stable example of an icosahedron-like boron cluster to be found. The hexagonal arrangement of boron atoms and their density with respect to the triangular arrangements is predicted to result in a large band gap and double (p- and s-) aromaticity, and would afford the molecule unexpectedly high chemical stability.