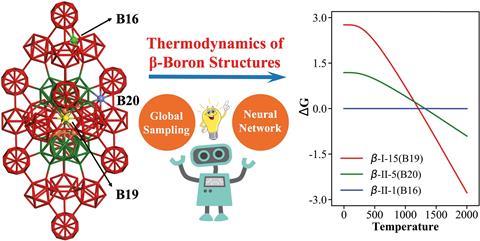 By combining machine learning with the latest stochastic surface walking global optimisation, researchers have for the first time explored the potential energy surface of β-B

Scientists in China have combined a potential energy sampling method termed stochastic surface walking (SSW) with machine learning to explore the potential energy surface of β-B.1 β-B is believed to be the most stable phase of solid boron, but its atomic structure had remained unclear – until now.

‘It is extremely surprising that the structure of a single element crystal of such great fundamental interest has not been exactly determined to date, considering that structures as complex as proteins can already be resolved with modern techniques,’ comments Zhipan Liu of Fudan University, who led the work. The presence of self-doping atoms in the crystal interstitial sites forming a massive configurational space would have made determining the real configuration of boron virtually impossible using existing methods.

Now, Liu and colleagues have made headway by constructing a neural network potential using a new set of structural descriptors that can sensitively discriminate the complex bonding environment in boron. Using this approach, they established the energy spectrum of all low energy configurations of β-B, enabling the atomic structure to be resolved in detail at finite temperatures. Liu’s team found that, contrary to the huge energy degeneracy long assumed for β-B, only 20 configurations are of significance to the observed boron structures. ‘This allows for a future exhaustive search for the reaction pathway between the transitions of these conformations,’ says Liu. β-B and its properties were found to be influenced strongly by the so-called B19 doping site, which has an extremely large vibrational entropy, and the configuration with B19 occupancy proved to be dominant at high temperatures.

‘I see this work as a tour de force of structure prediction in a complex solid system,’ comments Mark Tuckerman, a theoretical chemist from New York University in the US. ‘By devising new structural descriptors capable of interpreting the complexity of the material, the researchers have enhanced the predictive power of the neural network model – one of a class of machine-learning models – employed in their study.’

Scientists have long failed to understand many interesting phenomena associated with β-B, such as a dramatic change in its optical absorption around 150–180K.2 ‘Knowing the structures and determining how they transition at different temperatures would be a key step to understanding its photo-electric properties,’ explains Liu. He says the results will help clarify why β-B is more stable than α-B, and why it is a very hard material but has good conductivity at elevated temperatures.

Liu’s team suggest that machine learning with SSW could be used to study many different systems and recently applied it to a complex problem in catalysis.3 ‘Although it is not yet clear how transferable the new structural descriptors will be to other systems, for example molecular crystals, it will be interesting to explore them, or possibly modified versions of them, in this capacity,’ adds Tuckerman.