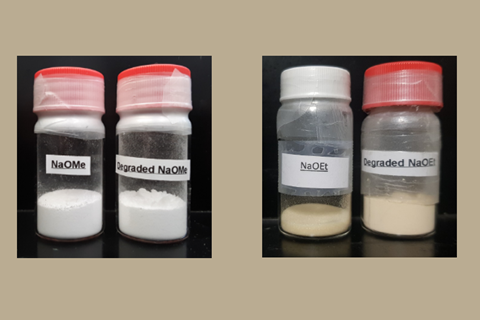 Stability problems with basic reagents used to make carbon–carbon bonds could be creating inconsistent reaction outcomes across the world, US researchers have discovered. Scientists at Scripps Research in La Jolla and Bristol Myers Squibb (BMS) in New Brunswick have shown that solid sodium alkoxides rapidly react with carbon dioxide in air. ‘By Raman spectroscopy, we detect changes in the spectra within the first few hours of analysis under a standard laboratory environment,’ comments BMS’s Steve Wisniewski.

That’s significant because alkoxides play an important role in synthetic organic chemistry reactions. For example, they enable Suzuki–Miyaura cross-couplings that connect molecule fragments through bonds between carbon atoms. Following over two years of detective work, the chemists have shown that stored alkoxides unintentionally exposed to air can interfere with these vital steps.

‘Who knows what types of transformations a sodium alkoxide could be required for that gave a false negative result because the bottle had degraded?’ asks Keary Engle from Scripps. ‘Alternatively, false positives can potentially arise from the presence of degradants, which may be the actual active reagents.’

That happened at BMS, explains Wisniewski’s colleague John Coombs. The company’s researchers had been working on a palladium catalysed Suzuki coupling involving both sodium ethoxide and methoxide. Outcomes varied with different lots of these alkoxides, with analyses showing that the better-performing lots were degraded.

Then, the BMS team worked with Engle’s group on a reaction using a nickel catalyst and sodium methoxide. The reaction worked with sodium methoxide from Scripps, but stalled with lots from BMS. ‘It was only after discussion between the two labs that we realised the potential widespread implications that this observation could have in the chemistry community,’ Coombs says.

Engle adds that the problem may not have been picked up before because degraded materials look almost exactly the same as pure alkoxides. ‘Further, there is a belief that if the alkoxides decompose, the degradation product would be sodium hydroxide,’ he says. ‘However, the degradation is a much more complicated process.’ Many chemists avoid the complex mixture of inorganic compounds generated by making the alkoxides themselves immediately before use, Engle adds.

Commonplace analytical chemistry methods like proton NMR and IR spectroscopy can quickly check the purity of stored alkoxide bases, Wisniewski says. The problem only happens with sodium alkoxides, and not their potassium counterparts, he adds. The researchers suggest carefully storing sodium alkoxides under a covering atmosphere of nitrogen and limiting how long these bottles are open to air. ‘We recommend that commercial sources of alkoxides be assayed via NMR and IR prior to use or alternatively that the reagents are made in-house,’ Wisniewski stresses.

Donna Huryn from the University of Pittsburgh notes that ‘even the simplest of reagents, in the context of complex reactions, can be the culprit for irreproducibility’. ‘Papers like these are very useful, Huryn says. ‘When methodologies are irreproducible from lab to lab, there is rarely a careful review of the cause.’ She adds that in future, her team will definitely evaluate its alkoxides before using them.