Chemists in the US have created a catalyst system that they say is the first to make methanol straight from the tiny concentration of carbon dioxide in Earth’s atmosphere.1 The approach developed by George Olah and Surya Prakash’s University of Southern California (USC) team uses milder conditions than existing carbon dioxide-to-methanol processes. It is an initial step towards realising the group’s vision of making fuel from nothing but gases from the air and renewable energy, Prakash tells Chemistry World. However, Harvard University’s David Keith, a leading expert on ‘air capture’ of carbon dioxide from the atmosphere, is sceptical the new process can deliver on that promise. 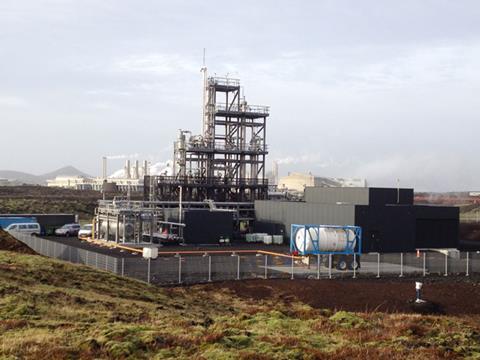 CRIâ€™s George Olah Renewable Methanol plant in Reykjavik, Iceland has an output of 4000 tonnes per year

The USC chemists advise Carbon Recycling International (CRI) based in Reykjavik in Iceland, which operates an industrial carbon dioxide-to-methanol plant named after Olah, who won the chemistry Nobel prize in 1994 for his work on carbocations. The company’s location allows it to exploit geothermal steam, which is rich in carbon dioxide, provides heat and can be used to generate electricity without burning fossil fuels. This lets CRI electrolytically split water and get hydrogen to reduce carbon dioxide to methanol.

However, CRI’s process uses solid copper oxide and zinc oxide catalysts to enable the reduction, which creates a chemical challenge when all the other chemicals are in solution. The process consequently requires the high carbon dioxide concentrations from geothermal steam and runs at 250°C and 100 atmospheres of pressure.

Olah and Prakash’s team had therefore been hunting for a soluble catalyst that might encourage hydrogen and carbon dioxide to react more readily. USC PhD student Jotheeswari Kothandaraman had previously screened a number of catalysts, finding that commercial ruthenium complexes helped the gases produce formic acid, but not methanol.2

In other work, USC chemists had also devised absorbents for capturing carbon dioxide directly from open air, where it’s present at just 400 parts per million. That experience inspired them to try a hybrid approach with perhaps the most common absorbents for large scale carbon capture, organic molecules containing amine groups.

Kothandaraman used pentaethylenehexamine (PEHA) because it dissolves in the same solvents as ruthenium catalysts. She captured atmospheric carbon dioxide by bubbling air through PEHA, before bringing it together with the catalyst under 50 atmospheres of hydrogen at 155°C. After 55 hours, 79% of the hydrogen was converted to methanol, which could be distilled straight out of the mixture, leaving the solvent, catalyst and PEHA to be used again.

Peter Styring, director of the UK Centre for Carbon Dioxide Utilisation at the University of Sheffield, UK, calls the work ‘a first step towards the direct reaction of air-captured carbon dioxide to produce value-added chemicals’. ‘This is important as it doesn’t require pre-separation of carbon dioxide and can be performed at any location without the need for “point-source” emitters [like fossil fuel-burning power plants]. This is clearly in the discovery phase and consideration needs to be made with respect to scale-up. It is an exciting discovery, with lots of potential for improvement.’ 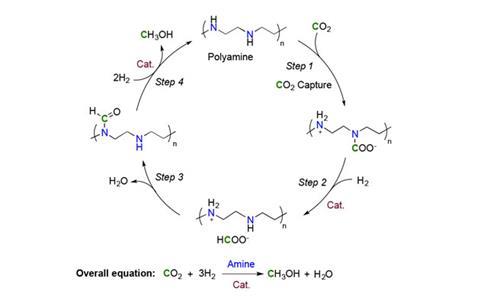 Kothandaraman's reaction efficiently converts carbon dioxide to methanol in the lab, but the polyamine solvent could cause air

Prakash wants the approach to ultimately help standalone electricity-generation systems produce methanol as a fuel to store their excess energy. ‘If you generate solar or wind power in a stranded place, which is not tied to the electrical grid, you can make hydrogen and in turn methanol,’ he says. ‘In Saudi Arabia they extract water [that could be used to make hydrogen electrolytically] out of air. In the deserts of Rajasthan, you can make a lot of solar power, there’s no carbon dioxide source – but this study shows you can take it out of the air.’

But Keith, founder of air capture firm Carbon Engineering, is sceptical that the method could industrially pull carbon dioxide from the atmosphere. He stresses that fluids evaporate when reaching equilibrium with a substance in such low concentrations. That even includes liquid amines like PEHA, which boil at 230°C at around 1% of atmospheric pressure. ‘There are air pollution problems even with losing amines from capturing carbon dioxide from power plants,’ Keith says. ‘When we capture from the air, the concentration is down by another factor of 250, so it’s completely dead. It’s nice chemistry, and it might be a promising pathway to methanol, but it’s hard to know if it would compete with existing processes.’

Nevertheless, Styring believes similar approaches could help carbon dioxide derived fuels and chemicals to replace some proportion of petrochemical feedstocks. Researchers at a UK meeting in September 2015 ‘felt that reactive capture of dilute carbon dioxide is promising’, he says.

CRI’s carbon dioxide-derived methanol is already displacing a small amount of petrochemicals. The company produces 4000 tonnes of the alcohol annually, and has agreements with Methanex, the world’s largest methanol supplier, and Perstorp, which uses the methanol to make biodiesel. And in 2015 Chinese carmaker Geely, which owns the Volvo brand, became a ‘major shareholder’ in CRI with a $45 million (£31 million) investment, seeing methanol as an alternative automobile fuel.