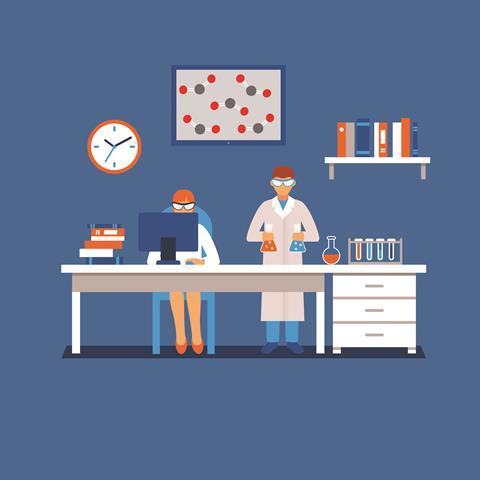 Scientists have developed a computer-aided method that designs carbon capturing ionic liquids and at the same time finds their optimal operating conditions.

Capturing and storing carbon dioxide decreases its global warming potential. Ionic liquids, salts that are liquid at room temperature, can trap large amounts of carbon dioxide. However, there are thousands of ionic liquids – their properties are dictated by their comprising anions and cations, and their ability to dissolve CO2 depends on temperature and pressure.

Researchers use computer-aided molecular design (CAMD) to quickly shortlist candidate ionic liquids. Although this virtual screening saves some research time and money, scientists still need to perform experimental work to find conditions under which the candidate compounds absorb the most CO2. Now, Nishanth Chemmangattuvalappil and colleagues from the University of Nottingham Malaysia Campus, Malaysia, and Qatar University, Qatar, have combined a disjunctive programming method with CAMD to simultaneously determine ideal ionic liquids for carbon capture and their ideal operating conditions.

Disjunctive programming models optimisation problems, breaking down the overall task into smaller pieces. ‘Suppose that an optimum ionic liquid is to be determined using provided molecular groups over a wide range of operating conditions, these operating conditions will be broken down into several shorter ranges,’ explains Chemmangattuvalappil. This reduces the problem solving time. ‘The most challenging part of the work is to obtain suitable models to predict the properties of ionic liquids because the study of ionic liquids is still scarce,’ adds Chemmangattuvalappil.

The team identified ten potential carbon capturing ionic liquids with imidazolium-based cations and tetrafluoroborate anions as well as their prime operating temperature and pressure, the ease and cost of their synthesis, and their toxicity and corrosiveness. The researchers found that their ionic liquids’ regeneration energy – the energy it takes to remove absorbed CO2 – was lower than for monoethanolamine, an industrial carbon capture liquid. The simulations also identified a trade-off between temperature, CO­2­ solubility and viscosity: at lower temperature, the ionic liquids could absorb more CO2 but also became more viscous.

‘This [study] represents an important step forward to explore the real efficiency limit of absorption-based carbon capture and separation processes with ionic liquids,’ says Fengqi You, an expert in chemical engineering from Northwestern University, US.

With this new method at hand, searching for new carbon capture liquids is not the limit.  Chemmangattuvalappil’s program could also identify materials for industrial applications such as biomass fractioning.