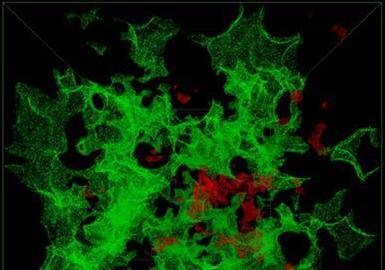 A membrane constructed from π-conjugated carbon rings sieves impurities out of methanol, hexane and other organic solvents.

Solvents are purified by distillation. While this process leaves all less volatile compounds behind, heating and re-cooling the solvent consumes a lot of energy. Simply filtering out impurities would be quicker and more energy efficient. However, most techniques are limited to removing salts from water as organic solvents tend to destroy the polymer material filters are made of.

Now, a research team from China has created a solvent-sieving mesh that can withstand solvents of all sorts – from non-polar hexane to polar protic methanol. Benzene rings cross-linked through carbon–carbon triple bonds form a network of interconnected pores. With an average diameter of 1.5nm, the pores retain compounds lighter than 560g mol–1, such as the dyes rose bengal and protoporphyrin IX.

The membrane is made using a Sonogashira–Hagihara reaction, which results in a highly cross-linked and all-conjugated porous polymer

The 42nm thick membrane, which sits on a porous polyacrylonitrile support, can filter solvents faster than any other material. It is also very tough: even 100 hours of continuous use, soaking in different solvents for one week and temperatures up to 300°C did not harm the mesh’s filtering capability. It did, however, struggle with aromatic solvents like toluene, which seem to get stuck in the pores.

The team created some modified membranes by functionalising the constituent molecules with substituents ranging from a small acetyl to the extremely bulky adamantane formyl. This, the researchers hope, might help chemists looking to custom make nanoporous sieves.