The first phosphatetrahedrane, an ultra-strained molecule made from three carbon atoms and one phosphorus arranged in a tetrahedron, has been synthesised by chemists in the US. The compound contains the smallest sum of bond angles ever seen in a trivalent phosphorus.

Plain, all-carbon tetrahedrane (CH)4 has never been made, although there are analogues with added substituents to protect the ultra-strained core. Now scientists have made the first phosphatetrahedrane, a tetrahedron in which one carbon atom is replaced with phosphorus.

After first trying to follow a synthetic strategy similar to that used for other tetrahedranes – which only produced a phosphorus analogue of housene – the chemists came up with a four-step route starting from an anthracene phosphine. The tri-tert-butyl phosphatetrahedrane they made turned out to be a waxy, volatile solid that dimerises into the housene analogue when heated to 130°C. 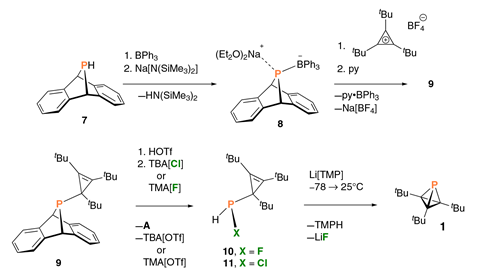 The molecule’s central tetrahedron is highly strained as indicated by its banana bonds, meaning the bond paths deviate significantly from a straight line between atoms. The carbon atoms squeeze the phosphorus into the smallest bond angle ever found in trivalent phosphorus – 141° versus the 180° sum of internal bond angles found in white phosphorus’s P4 tetrahedra. However, a corset of nine hydrogen–hydrogen bonds between the three tert-butyl substituents stabilise the structure somewhat.

While the compound doesn’t have an immediate application, the team behind the study thinks that tetrahedranes might make for interesting high-energy materials.