Protactinium, uranium, neptunium and plutonium are defying trends with new interactions: head-to-side δ and side-to-side φ bonds. These bonds, chemists have discovered, are part of the reason actinide metallacycles don’t follow the contraction trend – the decrease in metal–ligand bond lengths in heavier elements. 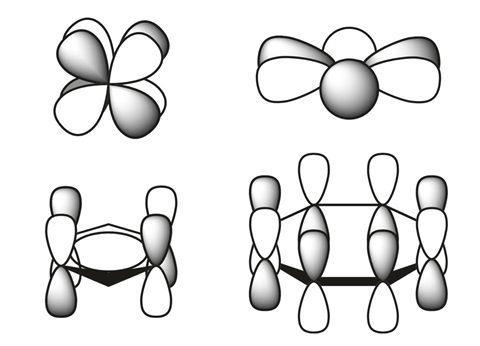 The size of elements’ atomic radii increases down each group and decreases across each period. The latter is a result of increasing nuclear charge that is only partially offset by increased shielding – electrostatic repulsion among electrons. The lanthanides and actinides, however, are smaller than expected because their f orbitals have particularly poor shielding properties. As a result, the transition metals following the lanthanides have almost exactly the same radius as elements immediately above them.

A team of scientists from Los Alamos National Laboratory in the US has now found two new types of bonding in actinide metallacycles that are the first to challenge this trend. They are versions of δ and φ bonds, covalent interactions between the metal’s occupied four-lobed d orbitals or six-lobed f orbitals and unoccupied ligand orbitals.

While quite rare, δ and φ bonds are have been reported before, but only in complexes in which the metal is not in the same plane as the ligands. Here, the orbitals of the metal and ligand, respectively, adopt head-to-head and side-to-head geometries.

In metallacyclopropene and metallacyclocumulene complexes of protactinium, uranium, neptunium and plutonium, however, the ligand is in the same plane as the metal. The Los Alamos researchers showed in computational studies that the orbitals form head-to-head δ bonds and side-to-side φ bonds – a new type of backbonding unique to 5f elements.

Together with more common σ and π interactions, the δ and φ bonds counter the impact of the actinides contraction. The researchers’ calculations predict increasing carbon–actinide bond lengths along the series. This increase is particularly pronounced in the transuranium elements, but since only thorium and uranium compounds have been synthesised to date, the trend has never been looked into.

The chemists think their discovery could have implications in nuclear separation chemistry. Targeting the unconventional δ and φ bonds could help separating actinides from the corresponding lanthanides.