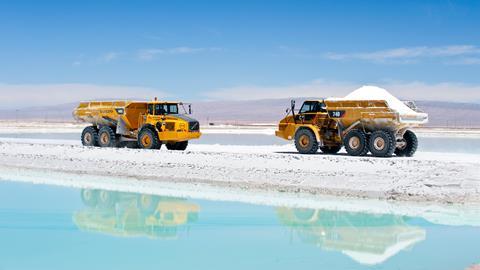 Lithium battery technology is widely seen as essential for the switch from fossil fuels to an economy that can make best use of renewable energy generation. This has led to massive increased demand for lithium. Ironically, however, the present process for extracting lithium is itself unsustainable – requiring high temperatures and toxic reagents. However, researchers in China and the US have shown that incorporating a layer of a solid ceramic electrolyte into the electrochemical cell used to extract lithium helps solve several of these problems, producing much cheaper and more environmentally friendly lithium.

The current industrial process for obtaining lithium involves electrolysing a molten mixture of lithium chloride and potassium chloride, depositing lithium metal at the cathode. Nearly 90% of the world’s recoverable lithium is thought to be in brine – highly salty water found in salt lakes and underground reservoirs. This also contains other metal ions such as sodium, magnesium and aluminium, which at present must be separated from the lithium chloride before electrolysis if they are not to be deposited at the cathode alongside the lithium. The purification process uses noxious chemicals such as hydrochloric acid. Moreover, the oxidation of chloride ions at the anode produces chlorine gas, which continuously erodes the carbon anode and poses an environmental hazard. 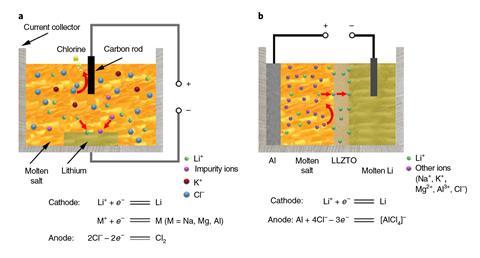 A conventional lithium extraction electrochemical cell (left) compared with the new one with a ceramic layer that selectively allows lithium ions through. This cell could make the extraction process for lithium cheaper as it operates at lowere temperatures without the need for toxic reagents

Now researchers at Tsinghua University in Beijing and Stanford University in California have added a layer of the ceramic Li6.4La3Zr1.4Ta0.6O12 (LLZTO) – originally developed by the same scientists as an electrolyte for liquid metal batteries – to the cell. As only lithium ions can pass through the LLZTO, the researchers could work with unpurified lithium chloride, leaving impurities behind in the molten salt. Better still, the researchers can even add aluminium chloride to the molten salt without risk of aluminium metal being deposited at the cathode. This conferred two key advantages: first, the melting point of the lithium and aluminium chloride mixture was much lower, allowing them to save energy by operating the cell at 240˚C rather than the usual 400˚C. Secondly, it allowed them to prevent the production of chlorine gas simply by using aluminium as the anode material, as any chloride ions oxidised simply produced more aluminium chloride. Overall, the researchers estimate that they produced metallic lithium at 20% of the cost of the current method.

Donald Sadoway of Massachusetts Institute of Technology in the US says ‘the ability to selectively extract high-purity lithium from impure feedstock is appealing, but the use of a brittle ceramic membrane poses challenges when one wants to achieve high throughput in an industrial setting’. He concludes that ‘ultimately the question is scalability and that is beyond the scope of this paper’.